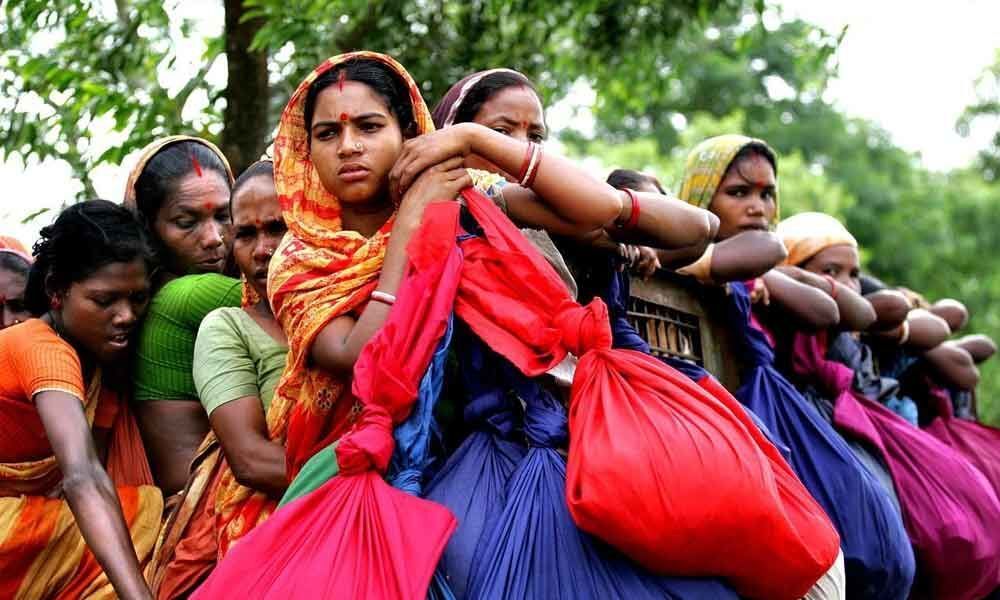 August 9 was observed as the International Day of Indigenous People world over.

August 9 was observed as the International Day of Indigenous People world over. It was Thomas Gray in his book 'Elegy Written in a Country Churchyard' sang songs of the deceased villagers buried in the churchyard – "Full many a gem of purest ray serene; the dark unfathomed caves of ocean bear; full many a flower is born to blush unseen; and waste its sweetness on the desert air."

So is the case with the Tribals. They are the indigenous people but subsequent upon various policies and projects, they have been alienated from their native land. Their cultural wealth is incomparable.

They can withstand any unfavourable situation unlike the so-called civilised people but now they have been exposed to severe diseases.

"A tribal is not poor. He is deprived and disinherited in his own domain, his 'DES' ironically amidst the unbounded bounty of Mother Earth to her dearest children.

They are the brightest jewels in the rich mosaic of great Indian civilisation proud of its vivacious diversity. You cannot teach democracy to the tribal people; you have to learn democratic ways from them.

They are the most democratic people on earth," were the words of Dr B D Sharma IAS who was the first Chairman of the National SC & ST Commission. He championed the noble cause of their rights.

Whatever and wherever a project is initiated by the governments, it will be obviously the tribals who have to sacrifice their lands and even habitations and consequently they will be rendered homeless. Unfortunately, their rehabilitation has been the least interest for the leaders.

There will always be a threat for them in the name of development like mining, irrigation projects etc. Some intellectuals term it as destructive development which causes displacement to the innocent tribals.

The tribal lives are very miserable in the core of the forests. They do not have road facility and can't enjoy electricity. They have more danger from the landlords or the mining mafia than the wild animals that live in their vicinity.

A civilised woman or a hair dressing expert can never make a complex plait or a hair knot like a tribal woman. They have got a great self-respect.

They are not so cruel or barbaric as shown in the movies. They are exploited very easily due to their ignorance. They feel unsecured in the so-called civilised world and consequently they do not want to come down their hillocks. It's the duty of the governments to persuade them and build confidence in them to join the mainstream.

There are many unsung heroes among the tribes. Komuram Bheem, with his heroism, waged a struggle against the hegemony of the Nizams and for the liberation of Hyderabad.

Malavath Purna is so far the youngest girl to scale Mt Everest and a few other tribal students rocked the Renok and even Kili Manjaro, the toughest mountain in Africa.

Some of the tribals have become professors in the varsities. Efficient and able administrators and bureaucrats have emerged from these communities.

A good number of people are cracking IIT, NIT and NEET exams and getting admitted into the prestigious colleges of Delhi University.

Tribals are physically strong and if they are provided good coaching, they can win medals for India in the Olympics. These people should become a great inspiration to the next generations.

How is this possible? If opportunities are provided, the tribals have proved they are no lesser than the others. They have already proved their mettle in various fields.

They too can become idols or stalwarts in various fields. Mere words of sympathy do not serve the purpose. Empathy is direly required for their uplift.

The research works of Prof Janardhan Rao, whose thoughts always centred round the development of tribals should not go waste. The sincere and serious efforts of Prof Alok Sagar, who has been residing amidst the tribes of Madhya Pradesh are to be emulated.

The policies evolved and implemented by Dr B D Sharma and the trust won by S R Sankaran IAS by opening more number of schools for these sections have set an example and stood a role model for the successive governments.

These ethnic groups should get due recognition and their due share in power.