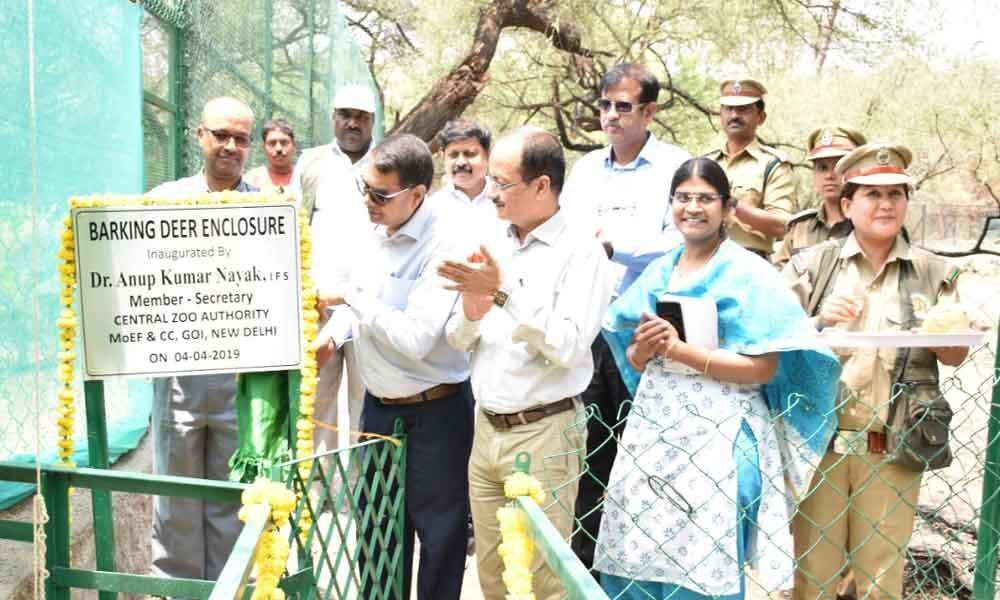 The Central Zoo Authority officials inaugurated the enclosure of barking deer (Muntjac) and release four of the animals for display at Nehru Zoological Park here on Thursday.

Bahadurpura: The Central Zoo Authority officials inaugurated the enclosure of barking deer (Muntjac) and release four of the animals for display at Nehru Zoological Park here on Thursday.

According to officials, the 'Baby Feeding Center' is a unique facility provided for the mothers for feeding their babies during their visit to Zoo Park. This facility is available in only one or two of the zoos in the country.

He also visited the Mouse Deer conservation breeding center and interacted with the biologist. The biologist explained all the activities and the measures taken up by the Nehru Zoological Park and after successfully breeding the animals were soft released into the wild at Amrabad Tiger Reserve (ATR), Kinnersani Wildlife Sanctuary and Mrugawani National Park.

N Kshitija gave a power point presentation on zoo management and various other development works which are being carried out during the year and the animal exchange proposals forwarded to CZA, New Delhi, for kind consideration. Animal adoption scheme brochure was also released by the Member Secretary.

Speaking on the occasion, Member Secretary Dr Anup Kumar Nayak said that the Nehru Zoological Park was already one of the top zoos in the country and promised to provide all necessary assistance from CZA for the betterment of the zoo.