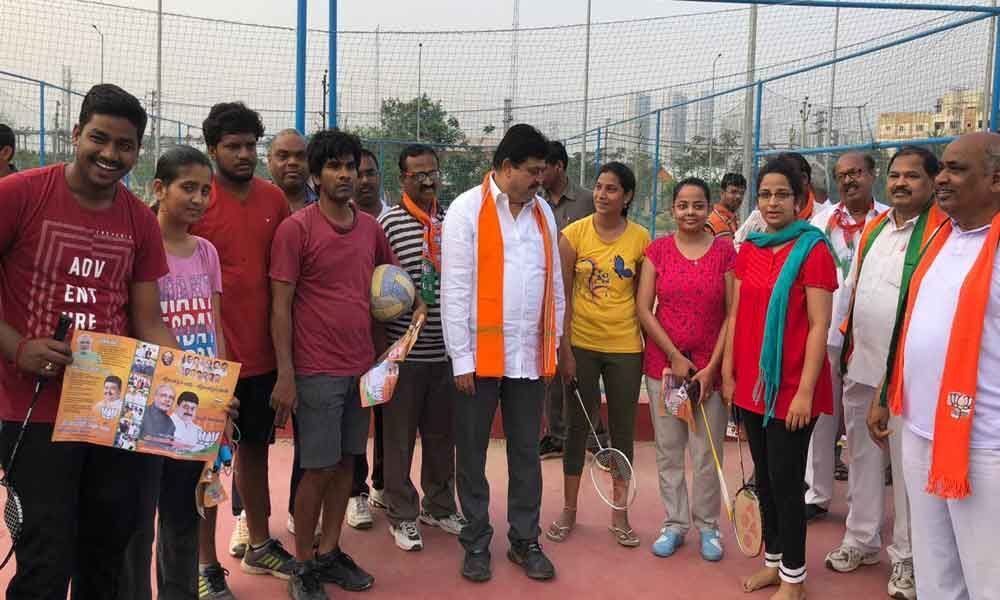 The BJP candidate for Medchal-Malkajgiri constituency, N Ramchander Rao, exuded confidence that BJP would win not less than 300 seats in the ensuing Lok Sabha elections and Narendra Modi would become Prime Minister of India again.

Kukatpally: The BJP candidate for Medchal-Malkajgiri constituency, N Ramchander Rao, exuded confidence that BJP would win not less than 300 seats in the ensuing Lok Sabha elections and Narendra Modi would become Prime Minister of India again.

He was speaking during his election campaign in Kukatpally assembly segment on Thursday. He visited several areas including IDL Tank, KPHB first, third and fifth phase colonies, Indu Villas and Rainbow Vista along with district BJP president Madhavaram Kantha Rao.

Speaking during the campaign, Ramachander Rao said that BJP would come back to power again winning more than 300 seats. Ridiculing Chief Minister K Chandrashekar Rao's statement that he would control the Central government if the party got 16 seats in the State, he said KCR could only control Harish Rao and not the Central government. He called upon people to end family rule of KCR in Telangana.

Ramachander Rao said that all the corrupt parties had formed fronts as they were afraid of Modi's rule. He questioned why KCR was not contesting in the parliament elections if he really believed that Federal Front would come to power. He said KCR's only intention was to make his son K Taraka Rama Rao the Chief Minister of state.

BJP Medchal district president Madhavaram Kantha Rao said that once BJP comes to power it would see the end of KCR's government. KCR has to inform city residents how it is spending the crores of rupees it collected as taxes in the State. He said that casting vote for TRS and Congress useless as Congress has lost its position nationally and TRS has no role to play at the centre. He urged people to vote for Modi to make the nation stronger.