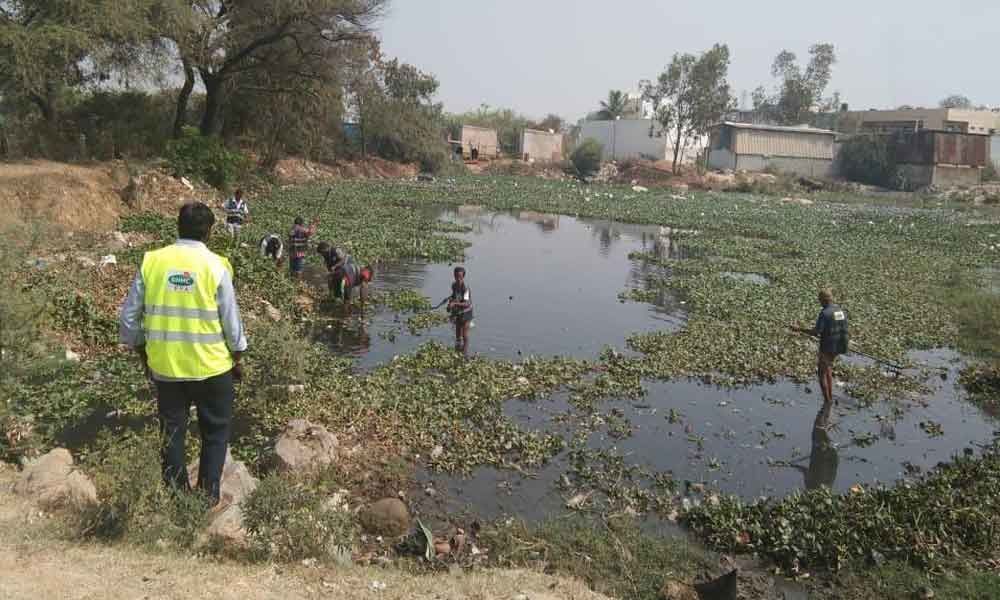 The Entomology Department of GHMC Quthubullapur has initiated a cleansing drive to eradicate the aquatic weeds in Rajiv Gandhi Nagar Park Cheravu.

Suraram: The Entomology Department of GHMC Quthubullapur has initiated a cleansing drive to eradicate the aquatic weeds in Rajiv Gandhi Nagar Park Cheravu. For this drive, as many as 8 workmen have been tasked with removal of the weeds, cleaning the area and spraying of chemicals. The weeds in half of the portion of the lake has been removed and the remaining part will be cleared soon.

V Arun Kumar, Assistance Entomologist, GHMC-Quthubullapur, said, "Water hyacinth (Eichhornia crassipes) is a troublesome aquatic weed and had spread all over the 3-acre lake and also form past 2 months. We had received numerous complaints from the locals of that area, so finally we decided to take action to clean the lake. The drive began on April 2 and it would take more 20 days to complete."

He further said that the process was applied first to remove the weeds from the root manually then they sprayed chemicals with the aid of durotex spray machine which was employed to spray the chemicals.

The mosquito larvicidal oil (MLO) and pyrosine oil inserted to this machine. Then it is sprayed on the edges of the lake. Slowly the chemicals dissolve and roots out mosquito larva, other aquatic species and also stunt the growth of the weeds.

The officials dealing with this drive also said to control the growth of the water hyacinth was difficult, so they would monitor the lake at least monthly once and also spray the chemicals.

Jagadish, a local said that finally the authorities had taken initiative to clean the weeds from the lake. Once the lake gets cleaned it would be a great relief, he added.

T Ramesh, the resident of the area said, "Before it was very difficult for us to move from this area and once it gets cleaned it will be easy to use this pathway."