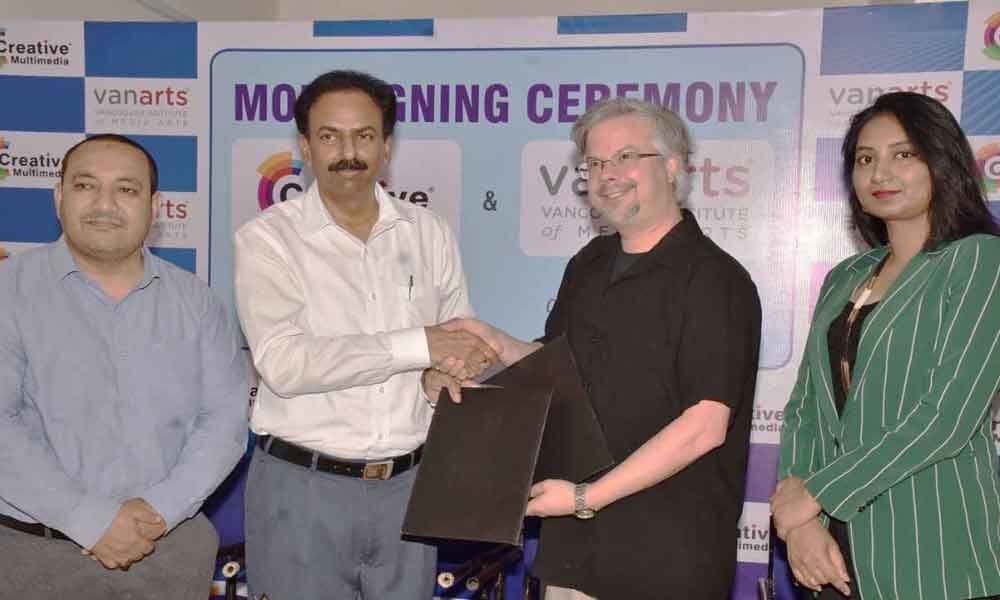 Khairatabad: Creative Multimedia, India's largest digital media academy, and VanArts (Vanouver Institute of Media Arts), one of the leading international schools for media arts, signed an Articulation Agreement (MoU) for advanced overseas animation training on Monday. The MoU was signed by Rajasekhar Buggaveeti, the CEO of Creative Multimeda, and Kennath Priebe, the Communications Manager of VanArts.

Rajasekhar said the MoU was part of Creative Multiple initiatives aimed at equipping students with the competitive edge in their careers, "Enhancing Employability" and enabling a world-class learning experience." He also said the Creative Multimedia was the largest, award-winning digital media academy in India with 21 years experience. VanArts is located in Vancouver, Canada, the world's largest hub for animation & VFX.

The MoU allows animation students of Creative Multimedia in India to pursue a highly focused 3D Character animation diploma programme abroad at VanArts in Vancouver, Canada, and also get dual diplomas from both institutes, acquire advanced skills to work in the global animation industry, and avail of the opportunity to complete the programme in as few as six months instead of 12 months at substantially lower tuition fees and living costs. He said the programme would give students an opportunity to train at the No. 3 animation school in the world and leverage the strategic location.

VanArts team spearheaded by Kenneth Priebe took a tour of Creative Multimedia's global-stand campus and conducted an information session for students on the study programs at VanArts. Shawket Hussain, Joint Director, IT&C Department of the State Government, and Karuna Mallesh, Director-Technology and British Columbia representative in India, attended the event as a special guest.