GHMC in talks to create mini-dense forests in city 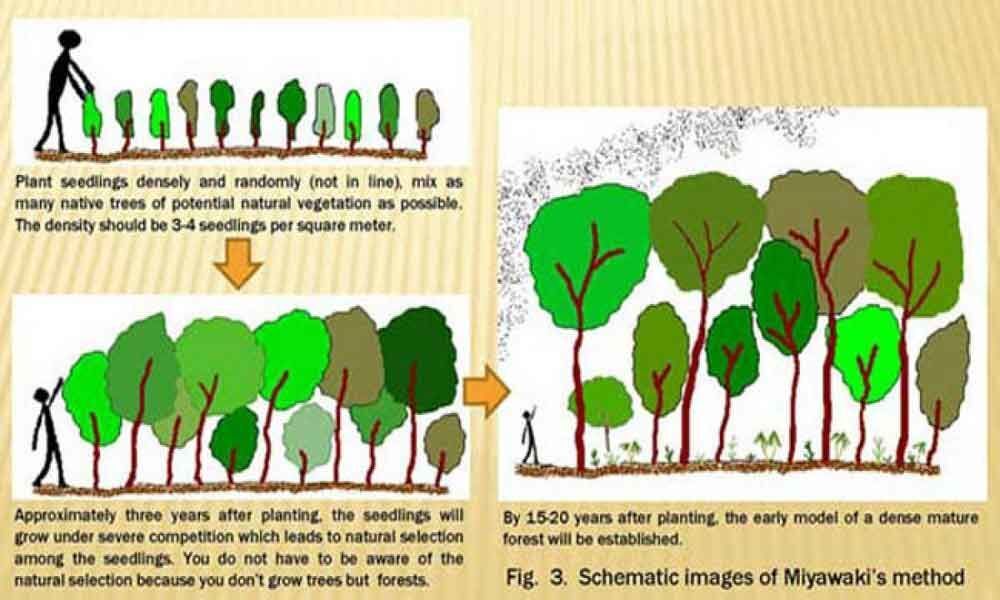 The green cover of the city is under constant threat due to ever-increasing pollution, which is exacerbated by cutting of trees.

• The move is inspired by results of a project in Mumbai, using a pioneering method

• Planting forests, not merely trees, in the heart of the city answer to heat trap

The green cover of the city is under constant threat due to ever-increasing pollution, which is exacerbated by cutting of trees. Giving hope to denizens of such cities, in Mumbai, where chopping of mangroves for various projects was resulting in an ecological threat to the metropolis, an environmental consultant managed to create a dense forest in the centre of city.

Impressed by the green results of the Mumbai consultants, who have planted around 3,000 trees in a pilot project, the GHMC is in talks with them to implement something similar in the twin cities for the conservation of the ecosystem. "The aim of the project is to restore forests by applying the theories of vegetation ecology to tropical forest regeneration founded by Dr Akira Miyawaki.

Since 1960, he has studied vegetation throughout the Japanese archipelago, especially in ancient shrine groves, and has now restored indigenous forests at over 600 locations throughout Japan," said Mumbai consultant Pradeep Tripathi.

"We are working in all metro cities like Mumbai, Pune, Ahmedabad, Bangalore, Hyderabad, Delhi-NCR, Lucknow, and Jaipur. I proposed the idea to the GHMC and they loved it. We are discussing terms with them as of now and are planning to implement this idea soon in Hyderabad. We hope to start the project soon," he informed.

The Miyawaki method of afforestation is named after the Japanese botanist and plant ecologist Akira Miyawaki. Using this, it's possible to grow a variety of native species in as little space as 600 sq.ft. Through this, you can have your own mini forest in your backyard.

The Miyawaki method involves plantation of native tree species at close proximity to each other. With time, these trees will grow into a forest with tall canopy trees blocking out sunlight and shorter plants and trees, forming a densely wooded area that humans and animals can only enter with some difficulty.

The trees will need two years of regular care, including watering, de-weeding, mulching and adding of beneficial micro-organisms, after which they will become self-sustaining and maintenance-free. In five years, the forest will be almost full-grown, and in ten years, will resemble a 100-year old forest.

Seedlings with extensive root systems are randomly planted in densely mixed plantings that match natural forest systems. The trees reach four meters after five years, eight meters after ten years, and over 20 meters after 25 years. The result is a diversified forest that is allowed to grow naturally after three years. According to Dr. Miyawaki's theory of forest regeneration, the best forest management technique is no management at all.

The Miyawaki method is effective even in severe environments and has been used to restore both temperate woodlands and tropical forests. Forests absorb more than they release, making them carbon sinks. .