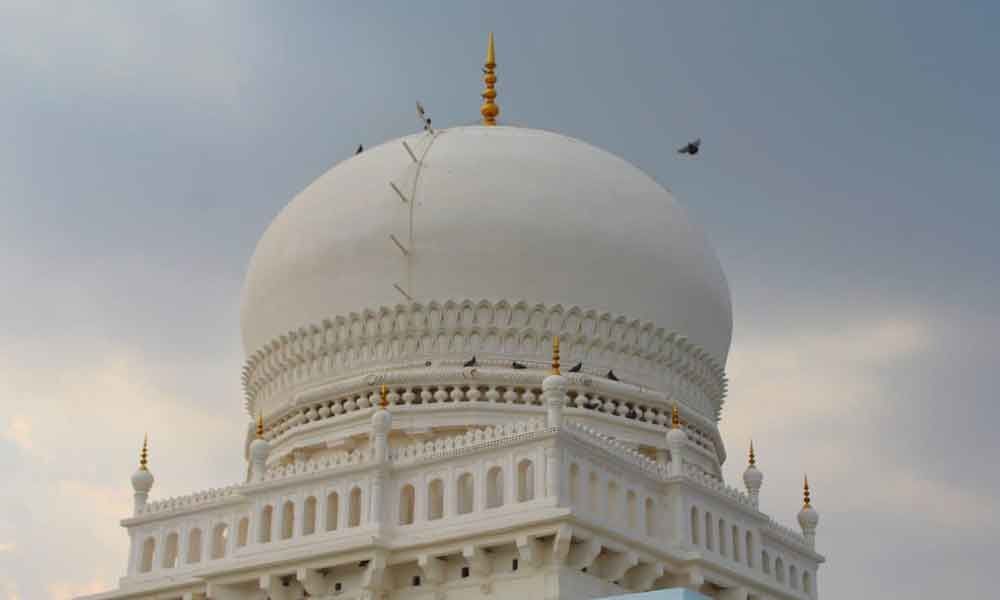 The famous Hari Gumbaz dargah, which houses the mausoleum of one of the greatest saints and scholar of his time, Hazrath Mir Shujauddin Hussain Qadri, gets facelift after several years. During the facelift process, the green colour of the tomb has transformed into white losing its distinct colour and characteristic.

Santosh Nagar: The famous Hari Gumbaz dargah, which houses the mausoleum of one of the greatest saints and scholar of his time, Hazrath Mir Shujauddin Hussain Qadri, gets facelift after several years. During the facelift process, the green colour of the tomb has transformed into white losing its distinct colour and characteristic. Being renovated by the custodian himself, dargah-e-Qutub-ul-Hind (title) located in Band Naka near Edi Bazaar at Santoshnagar is listed in the heritage monuments.

Alleging neglect from both TS Wakf Board and GHMC, Syed Mohammed Ibrahim, the 7th generation custodian decided to undertake the task upon himself. "For the last 4-5 years continuous representations were made to both the departments, but there was no response from the officials. Later, we approached MIM floor leader Akbaruddin Owaisi. After making estimates of about Rs 35 lakhs, he represented the matter to the officials concerned, but they did not pay heed. Later on the TS Wakf Board announced to give an amount of Rs 1 lakh, but nothing got materialized," he noted.

Ibrahim told The Hans India that after failure of departments to respond over the issue, the custodians decided to renovate and consulted retired heritage consultants. "The renovation works was started last year in May and will be completed in 5-6 months, by which time the annual Urs (anniversary) would begin. The renovation work of tomb is almost completed and the works at other sections are being undertaken.

Till now an amount of Rs 18 lakh has been spent and more 5-6 lakhs would be spent on remaining works," he added. He said that the Qutub-ul-Hind, after fulfilling his mission of spreading the light of Islam and purifying the hearts and souls of thousands of human beings left this world on Friday, 4th of Moharram, 1265 Hijri corresponding to November 31, 1848 AD.

He is buried at Edi Bazaar, Hyderabad, in the garden of his grandson Hazrat Syed Daim. A big tomb which was constructed around and above His grave is later called as Hari Gumbaz. "For the last 30 years the tomb was in green color but now after renovation, the color of the dargah is same as before. The renovation works were totally done by Gachhi. The works of the dargah is done by the retd state archeology department consultant engineers Azeem Osman and Mohammed Aleem," added Ibrahim.

Qutub-ul-Hind was born in the year 1191 Hijri corresponding to 1774 AD at Burhanpur, Madhya Pradesh. He belonged to the pious genealogical linage of Hazrat Muhammad ibn al-Hanafiyyah, son of Hazrat Syedna Ali ibn Abi Talib RUA. His ancestors had migrated from Arabia to India during the period of Mogul Emperor Akbar.

When he was 18 years old, he set out on a pilgrimage to Hajj, and after returning from Hajj, he migrated to Hyderabad, Deccan. Initially, he stayed at the residence of Nawab Fathe-ud-Daula, who was his relative, and during this stay in the Hyderabad, he learnt the Saha Sitta (The 6 famous books of Hadith) from Hazrat Izzat Yaar Khan, Chief Justice.

After the completion of the Saha Sitta and receiving other knowledge, he went to Khandar, Maharashtra, for spiritual guidance under Hazrat Shah Mohammed Rafiuddin Khandari (RUA). During his stay at Khandar, which was of six months he completed the Sulook (spiritual training), under the guidance of Hazrat Shah Rafiuddin, who then granted him Ijazat (permission) in the four salasil (ways) of Tareeq of Qadri, Chisti, Naqshbandi and Rifai. After this with the permission of his Shaikh, he came back to Hyderabad.

Hazrat Qutub-ul-Hind was also the author of a number of books on different subjects of Islam like Tafseer, Tajweed, Hadith, Fiqh, Aqayed, Tasuwauf and Sulook, etc. Beside these, He wrote many poems in Persian language and Arabic. Hazrat Qutub-ul-Hind besides being a great religious scholar was a man of spirituality and Qutub (stage post to spirituality) of his period. By his teachings and spiritual power, he showed the right path and Hidaya to thousands of people. Hundreds of people were converted to Islam by him. Thousands gained knowledge and spiritual guidance from him.