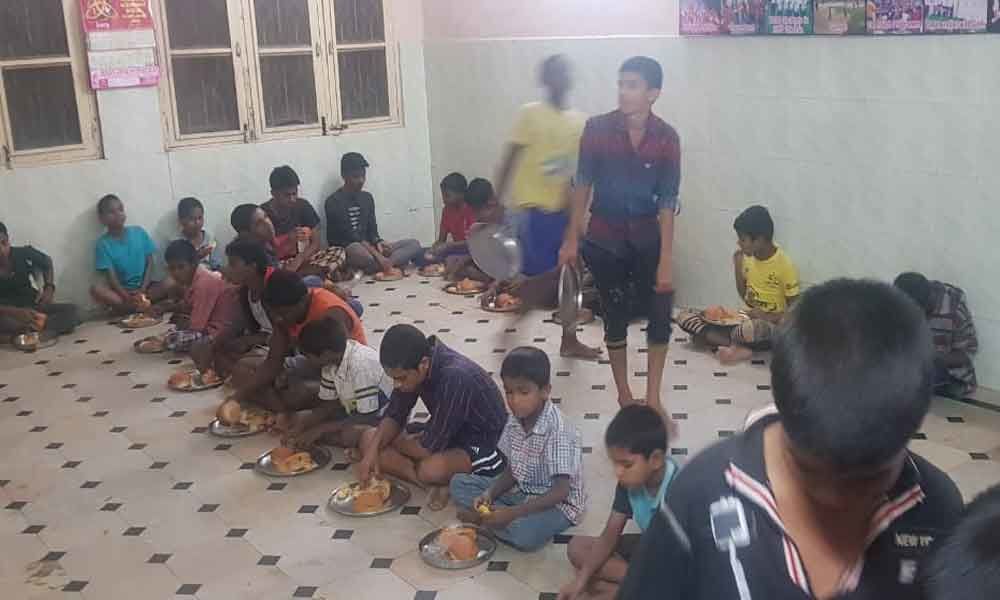 Indians waste as much food as the whole of United Kingdom consumes – a statistic that may not be so much indicative of our love of surfeit, as it is of our population.

Hyderabad: Indians waste as much food as the whole of United Kingdom consumes – a statistic that may not be so much indicative of our love of surfeit, as it is of our population. Still, food wastage is an alarming issue in India. Our street and garbage bins, landfills have sufficient proof to prove it. Weddings, canteens, hotels, social and family functions, households spew out so much food. Though the awareness around this has grown in the last five years hunger warriors are trying their best to avoid food from getting waste.

To stop the food from getting waste and fight hunger problem in the country, a volunteer team of young professionals and citizens named The Robin Hood Army (RHA) has taken to the streets in their free time to fight national hunger. The team collects excess food from restaurants and distributes it to the less fortunate so that no one is starved. Through a combination of a passionate team and a healthy seasoning of luck, they have now built an "army" of Robins across 41 cities who have served 2.1 million people till date. The RHA is present in 103 cities who also conduct regular awareness drives besides distributing food.

They work with a hyper-local approach. Each city is split into smaller chapters we have 2,000 volunteers across 19 major places in Hyderabad, each chapter has 80 to 100 volunteer who looks after the activities in their specific chapter. For example, restaurants in the neighborhood Green Park will contribute to the homeless of the locality, so the volunteers who live near Greek Park will go and distribute food to the homeless and needy people.

The chapters are run by friends and colleagues, who hope to create a difference in their own unique ways, and everyone does this in their free time and our "Robins" are largely students and young working professionals. The lesser fortunate sections of society we serve include homeless families, orphanages, patients from public hospitals, and old age homes.

"People can contact us through our website or through our social media handles and inform us about the food that needs to be picked up from their wedding, party or event and our volunteers will visit the place collect the food in our own container and get to the nearest distributing point and distribute food. The exact location and quantity of food are being confirmed on call before sending any robin for pickup," said Venkat who is part of Robin Hood Army for the past one-and-half-a-years.

"The name Robin Hood came from the legendary heroic outlaw originally depicted in English folklore. But we don't exactly steal from the rich and give the poor, but the idea here is to create a growing platform where people can contribute their skills and resources to the benefit of those who need the help most. Our vision is to beat global hunger and bring out the best of humanity using food as a medium. The idea is to create self-sustained chapters across the world that will look after their local community. And in the process, inspire people around us to give back to this who need it most." added Venkat.

Do you want to join RH Army?

Interested people, who wish to volunteer or those who want to inform about food pick-up, can contact Robin Hood Army on their website at www.robinhoodarmy.com. Each team has complete authority to come up with its own initiatives. They have only one rule which is a 'Strict no-funds policy.' No one can raise monetary donations in the name of the RHA

HOW IT ALL BEGAN

The organisation was founded on August 26, 2014, by Neel Ghose and Anand Sinha. The idea to start RHA came while Neel was living and working in Lisbon, Portugal, where he came across a unique organization named Refood, which collects excess food from the restaurant and gives it to the less fortunate. He was infatuated by the simplicity of the idea and realized this is something which can be replicated in India where the need is so much more. He then spent some time with the founder and the team to understand the operations.

When Neel moved back to Delhi he got in touch with his old friend and colleague Anand Sinha. They discussed the idea, the feasibility, the challenges, whether it would actually create a difference later they realised they were just over-thinking and over-strategising about this and the only way to learn is to hit the ground running.

Research says that there are 194 million hungry people in India of which 7,000 die every single day starving. That's when they realised that serving a few hundred people might feel good to the conscience but would make no difference in a country where millions are going hungry. That set the culture of disruptive growth in the Robin Hood Army