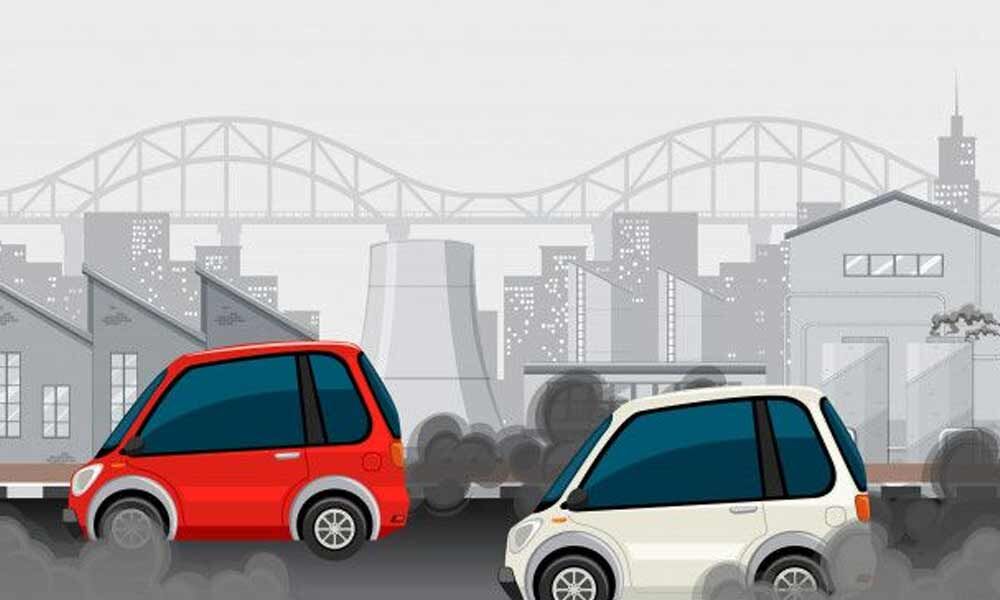 Sanathnagar: Air quality levels which improved during the Covid-induced lockdown are back as more and more vehicles are coming out on roads these days. Right from the unlock phase 4 in June,there had been increasingly more vehicular pollution.

"Usually every year, air pollution slightly dips after the winter season but this time it hit differently. Half of the year 2020 was all about lockdown restrictions, resulting in less pollution but as the unlocking phases kicked off pollution also resumed back. Unlike every year, summers this time doen't seems to ease from pollution," said Dr D Prasad, Environmental Scientist (Air) TSPCB.

"Pollution levels are increasing for a number of reasons, an average Air Quality Index (AQI) of Hyderabad is 132 which are unhealthy, it goes to a maximum average AQI 165 and it fluctuates as the pollution varies hourly and daily. In summer, radiation from the sun is stronger and importantly nitrogen oxide reacts with the hydrocarbons and other chemicals in the sunlight as the tropical winds and dust storms are more likely to pollute air quality," he added.

After relaxation of the Covidrestriction we could see vehicles back on roads, operating power plants, industrial plants and factories emitting thick plumes of black smoke and constructions, household activities and natural contamination also adding their bit to the deterioration of air quality in the city.

According to the Telangana State Pollution Control Board (TSPCB), the Ambient Air Quality (AAQ) in several parts of the city including Hyderabad Central University (HCU), Bollaram Industrial Area, Sanathnagar, Zoo Park and IDA Pashamylaram is turning from bad to worse.

After recording a sharp fall in the air quality index (AQI) at Bollaram in April indicates unhealthy levels with AQI 115, which during lockdown recorded AQI 60.

The Central University of Hyderabad which last recorded only AQI 58 on Thursday recorded AQI of 132. HCU areas saw PM 2.5 levels increasing considerably. Meanwhile, the air monitoring quality at ICRISAT recorded an AQI of 119 which is unhealthy according to the data from the state AQI of the Telangana State Pollution Control Board (TSPCB).

In the same vein, the levels of nitrogen dioxide (NO2), nitrogen oxide (NOx) and sulphurdioxide (SO2) are also slowly picking up at Sanathnagar area, whose air quality index escalates to 132 which was 62 AQI in April last year.

In the first three months of 2021, levels of nitrogen dioxide were also higher than the previous year. Mostly, nitrogen dioxide is caused by vehicles and industrial gas emissions and the pollution from them is unstoppable.

Other than greenhouse gases, the nitrogen dioxide alone contributes to the deaths of three million people a year across the world. During lockdown, nitrogen levels observed 55 per cent downfall from March 25 till April 25, 2020 and now it is gradually increasing resulting in 20 per cent contribution to the pollution.

Switching to decarbonise transport and maintaining enough greenery would help to control air pollution, said an environmentalists in the city. Meanwhile, there are demands that it is time to take tougher measures on industries emitting pollution.