No headway in probe into godown explosion 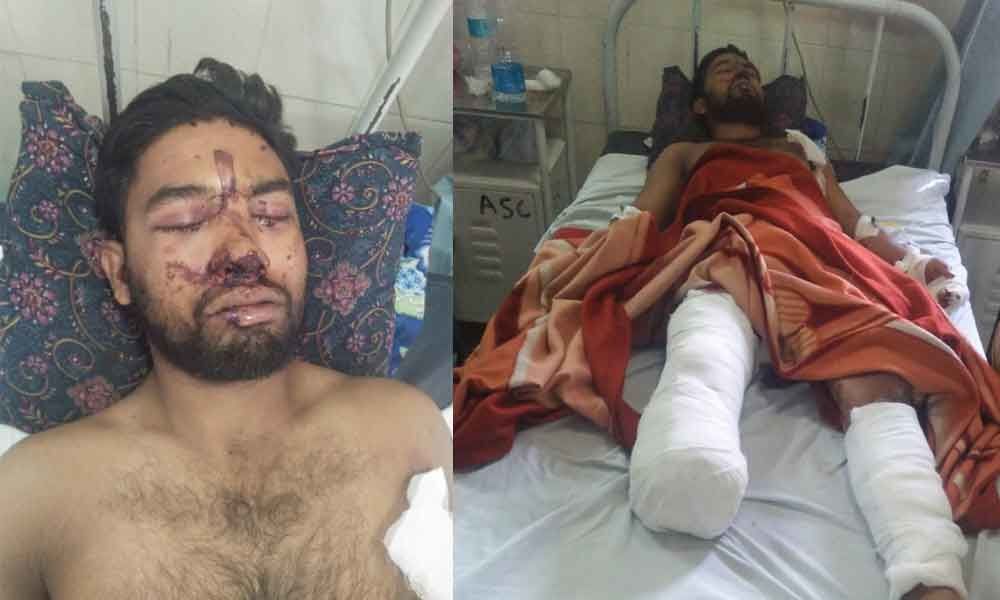 x
No headway in probe into godown explosion
Highlights

Despite a horrific incident a few days ago on April 10 at a godown at Shastripuram, wherein a poor labourer lost his leg when a powerful explosive went off, the Mailardevpally police are still in a quandary to find a proper approach to move on with the investigation and to nab the culprit.

Shastripuram: Despite a horrific incident a few days ago on April 10 at a godown at Shastripuram, wherein a poor labourer lost his leg when a powerful explosive went off, the Mailardevpally police are still in a quandary to find a proper approach to move on with the investigation and to nab the culprit.

Nearly two weeks have passed since the incident, and the police are yet to make any arrest in the case and are caught in a piquant state over not being unable to find a proper way to approach such kind of cases.

"We are exploring various ways to steer the investigation further. No arrest has been made yet in the case. It is difficult to understand whether to approach FSL (Forensic Science Laboratory) or Bomb Squad to take the investigation further. I have written to various investigating agencies and am awaiting their response. Though we are fully able to make arrests in the case, but it is better to do so, only after completing due legal process," informed Rajesh, Sub Inspector at Mailardevpally Police Station.

When asked about how much time it would take to see any arrest in this case, the official said that, "if the directives come from the higher-ups then the arrests would be made in no time."

There were two incidents of explosions happened in a gap of 24 hours between April 9 and 10. The first incident occurred at post noon on April 9, wherein a labourer namely Afroz was grievously injured in a powerful explosion in the plastic unit. The impact of the explosion was such that his right foot was sundered apart and parts flung a few meters away from him. He was rushed to Osmania General Hospital where his right leg was permanently amputated.

The next afternoon on April 10, local corporator Misbahuddin, accompanied by a few party activists, went to the spot to examine what really happened and why the police appeared hesitant to nab the godown owner soon after the incident. However, while trying to open the gate, another explosion went off, leaving five people severely injured including Misbahuddin, Inspector PS Mailardevpally K Sathaiah Goud, Sub-Inspector Nadeem and a few others.

Despite recurrence of devastating explosions within a gap of 24 hours, the police are still in denial about any existence of a life-threatening chemical substance in the godown, which made a person permanently disabled and a few lost their eardrums due to the deafening explosion.

Denying the reports of existence of any chemical substance in the plastic godown, SI Rajesh said: "It was just an empty container of paint used to colour the apparels. The explosion is a result of worn out gas reaction due to a leftover lump in an empty paint container that might have exploded due to rapid heating of surrounding area."

Going by the recurring explosions with a devastating impact and the description of some local people, it may be very difficult to come to terms with the police version.

Whatever the police say about the case, naysayers are skeptical and are yet to accept the police version. It is said that various types of chemicals were being used as per the requirement in godowns to segregate plastics and many of them are life-threatening and vulnerable to any heat condition.

These activities are often carried out without any proper safety precautions and performed under camouflage since the godowns are being run in the residential areas. Some unscrupulous traders aver residential areas are best places to escape the notice of officials. Even some incidents such as the one at Shastripuram are often not been registered because it is locally managed and hushed up by the operators using their influence.

It is said that neither the officials of GHMC Rajendranagar have taken any stock of the incident so far nor the electricity officials concerned under Khaja Pahadi Section have visited the spot to inquire about the operations at the plastic godown and the availability of power connection there.

"Even the role of police is also highly objectionable. Though the foot of the labourer was blown up and fell a few meters away in the incident, the police have not yet made any arrest in the case under pretext that the matter is under investigation," criticised Misbahuddin, the corporator of Shastripuram division who himself was injured in the incident.

Condemning the dilly-dallying on party of the police in probing the matter, the corporator said that, "A Circle Inspector and a Sub Inspector of the same police station besides me also got injured along with a few others in the incident. What more proof do the police need to take a swift action against those perpetrators who are operating life-threatening industries in the residential area? Instead of 'Friendly Police' I would prefer to call them 'Sleeping Police."