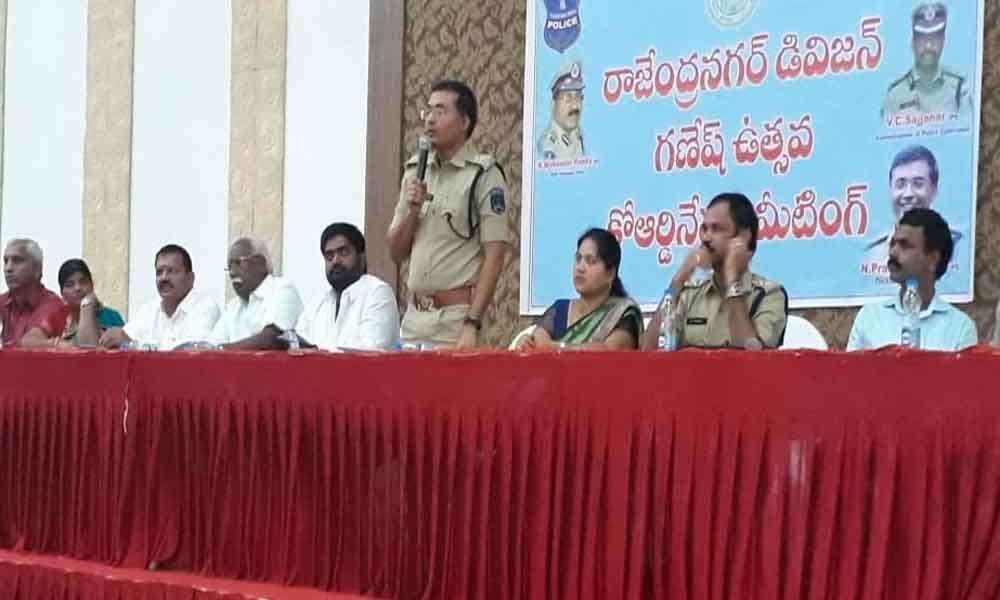 Cautioning against using DJs during Ganesh immersion day, the police officials said cases would be book for the violation and drive for Drunken Driving would also be held to ensure that there would be no instances of nuisance especially during the 10-day long celebrations.

Rajendranagar : Cautioning against using DJs during Ganesh immersion day, the police officials said cases would be book for the violation and drive for Drunken Driving would also be held to ensure that there would be no instances of nuisance especially during the 10-day long celebrations.

Speaking at the Ganesh Utsav Coordination Committee meeting on Wednesday in Rajendranagar, DCP (Shamshabad Zone) N Prakash Reddy warned that anyone found violating the rules would be dealt with sufficient deterrent laws. The meeting was convened to get the cooperation of organizing committees of Ganesh festivities and Welfare Associations for the peaceful completion of Ganesh Immersion and Procession scheduled to be held on September 10 in Rangareddy District.

The DCP also cautioned about seeking donations (chanda), as compelling people may attract legal action against them. "It is OK if people come voluntarily to contribute, otherwise no one should exercise coercive practices against the citizens," he added.

The pandal committee should ensure sand bags at Ganesh mandapams so as to use them in the event of any untoward fire incidence. People should avoid venturing into immersion lakes beyond the ambit of security arrangements on the immersion day.

Elaborating the measures being taken by the police to ensure peaceful conclusion of the event, he said fool-proof security arrangements had been made. People should avoid creating unnecessary problems on the roads during the Ganesh immersion day as this would cause inconveniency to the commuters and even traffic congestion.

For members of the pandal committee, it is necessary to provide all the details regarding their pandals, members and the size of the idols for which the forms are made available at the police stations concerned and even provided online from where they could be downloaded.

Members of the Ganesh Mandap Committiees and Welfare Associations of Moinabad, Rajendranagar, Mailardevpally and Attapur have turned at the event in big number.

Speaking on the occasion, ACP Rajendranagar Ashoke Charaverthi said use of loud speakers only permitted till 10.00 pm in the night while organizing DJs are completely prohibited. He asked the people especially the Ganesh Mandap Committees to cooperate with the Police.

Local Corporators, officials from revenue, health and other police officials were present on the occasion.