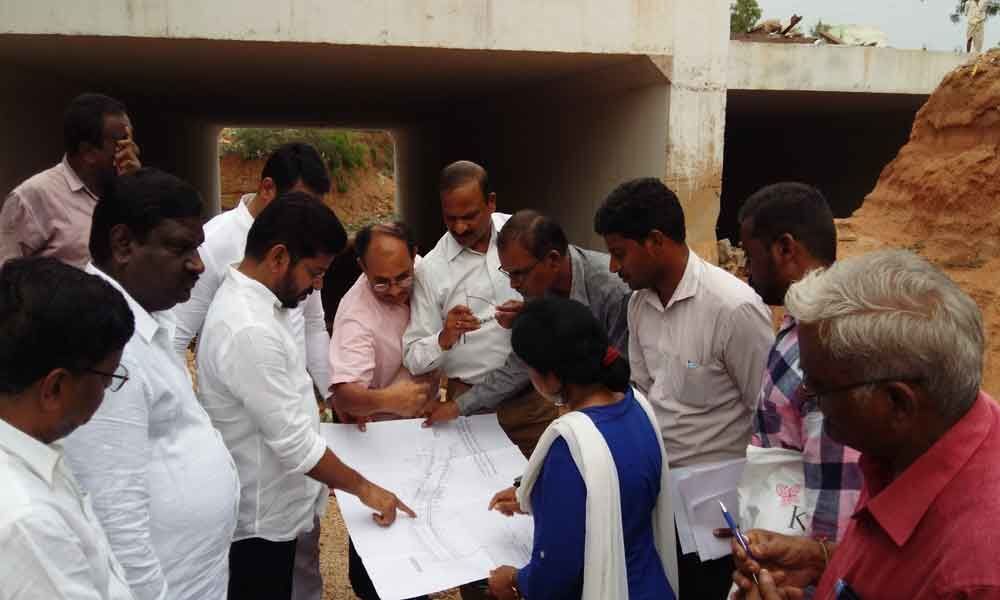 Revanth Reddy, Malkajgiri MP, visited railway under bridge which is being constructed at Anandbagh in the constituency on Thursday. During his visit,...

Malkajgiri: Revanth Reddy, Malkajgiri MP, visited railway under bridge which is being constructed at Anandbagh in the constituency on Thursday. During his visit, he inspected the construction works and discussed the reason for delay in the works with town planning and R&B officials. Local Congress leaders accompanied him.

Speaking to media, he said that he has been elected by the constituency voters to address their issues and question governments on the issues. Revanth Reddy said that he met Cantonment Board CEO and Railways GM, as part of his efforts to address various issues of the constituency. After discussing with the officials, delay in RUB works seems to be because of town planning and rehabilitation issues rather than a railways related issue, he said.

The matter needs to be addressed with the cooperation of the locals, he said. The MP said that all the public representatives of the constituency need to set aside politics for the sake of development of the constituency. As the solution for the delay in the construction work lies with the state government, the local MLA should consult the state government for the speedy resolution of the issue, he said.

Criticising the state Chief Minister K Chandrashekar Rao for encouraging defections, he questioned the misuse of Pragathi Bhavan, CM's office, which was being used by the CM to organise dinners for the defecting MLAs. Revanth Reddy said that people of Karimnagar and Nizamabad have taught a lesson the recently held Parliament elections for his family rule, but it appears the family has not received it yet.

He also criticised the speaker for not maintaining the sanctity of the post. Instead of addressing the complaints by the Congress on defections, the speaker has only taken up the complaints by the defected MLAs, he said. Alleging the CM of autocratic rule, he said that 'Kalvakuntla constitution' has no validity. Only constitution written by Dr BR Ambedkar is followed in India, he remarked. He urged the CM to address the public issues rather than indulging in petty politics.