Thousands head to AP for polling 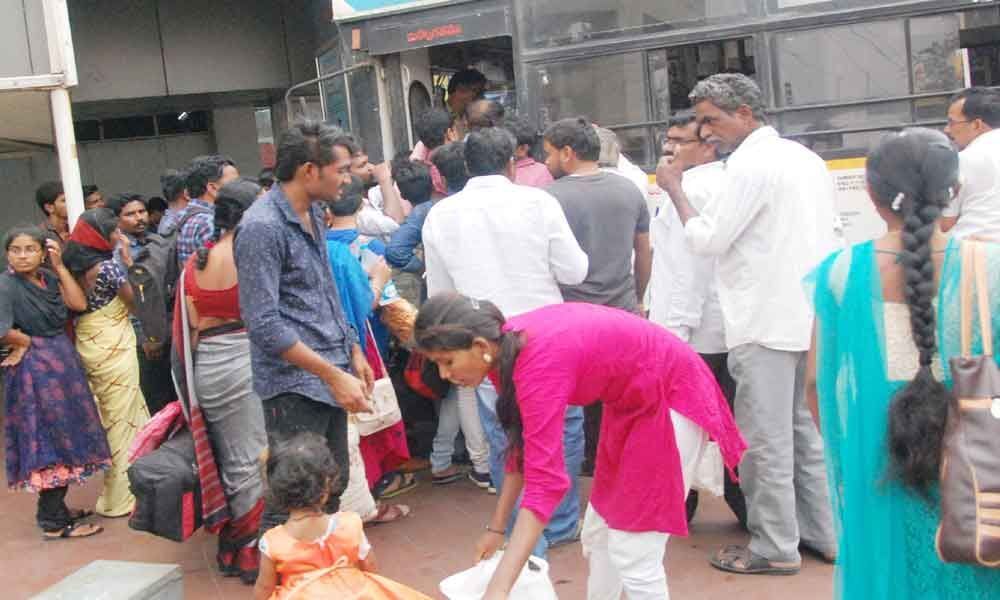 Buses and trains are overcrowded, while there were traffic snarls at the toll plazas, as thousands of people from Hyderabad were heading for Andhra Pradesh to cast their votes on Thursday.

Hyderabad: Buses and trains are overcrowded, while there were traffic snarls at the toll plazas, as thousands of people from Hyderabad were heading for Andhra Pradesh to cast their votes on Thursday.

Hundreds of vehicles were stranded in queues at the toll plazas on the Hyderabad-Vijayawada highway and chaotic scenes have been witnessed since Tuesday night.

More than 20 lakh people, who have roots in Andhra Pradesh, but living in and around Hyderabad, are said to have votes in both the States. Unlike in 2014, when elections were held in different phases in Telangana and Andhra Pradesh, this time both the Telugu-speaking states are going to the polls in a single phase on the same day.

Some political parties had demanded simultaneous polling in both the states to prevent bogus voting. The YSR Congress Party told the Election Commission in February that over 20 lakh people have votes in both Telangana State and Andhra Pradesh.

About a 1.5 km-long traffic jam was seen at the Pantangi toll plaza on Wednesday in the Yadadri-Bhongir district of Telangana. There were heated arguments between vehicle owners and toll staff as the commuters demanded the speeding up of toll collections.

Some of the commuters even demanded that the authorities stop the collection of toll, as was done during the Sankranti festival to allow for the smooth flow of traffic.

In addition to over 500 daily services operated by the Road Transport Corporation from Hyderabad to Vijayawada and other destinations in Andhra Pradesh, the authorities were running special buses to clear the rush. Private bus operators were making a killing by charging exorbitant fares.

The Mahatma Gandhi Bus Station (MGBS), the biggest bus station in the Hyderabad and Secunderabad railway stations were teeming with commuters including private employees along with their families, techies and students.

Besides polling, the summer holidays for schools and colleges are believed to be another reason for the huge rush. Such scenes are usually witnessed on the occasion of Sankranthi, when families having roots in Andhra Pradesh head home for the harvest festival.

Some parties and candidates are said to have either arranged special vehicles to ferry voters from Hyderabad, or paying for their fare on both sides, as well as for food and other expenses.