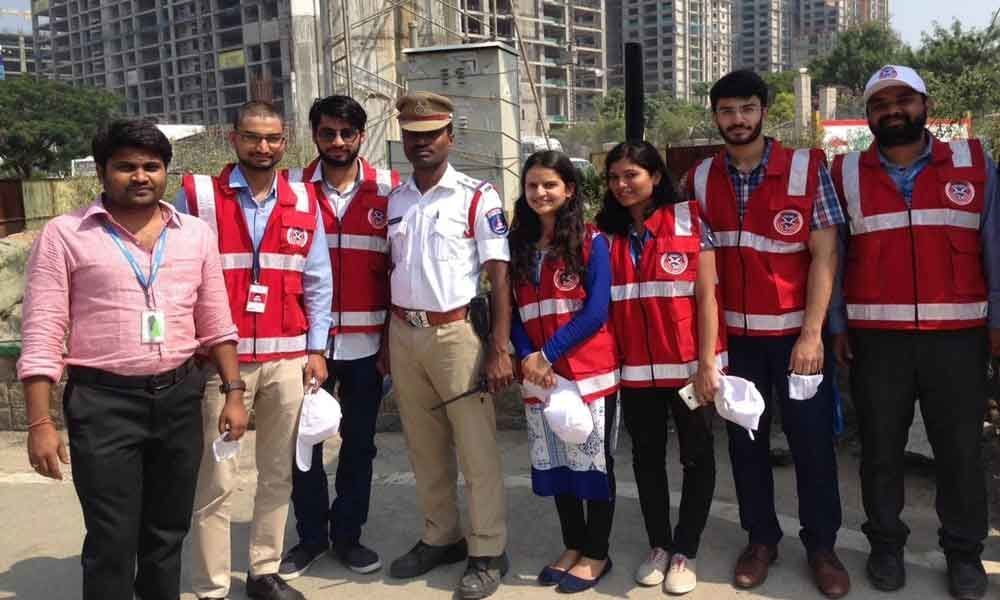 Responding to the call from Society for Cyberabad Security Council (SCSC), IT employees joined in the efforts to ease traffic in the city. This initiative started in 2014 by a few volunteers has now grown with 1,800 being on active call to rise to any occasion.

Hyderabad: Responding to the call from Society for Cyberabad Security Council (SCSC), IT employees joined in the efforts to ease traffic in the city. This initiative started in 2014 by a few volunteers has now grown with 1,800 being on active call to rise to any occasion.

As many as 200 active volunteers from different IT companies have contributed around 18,500 hours of effort so far supporting Cyberabad Traffic Police team.

The SCSC team has also set up a traffic volunteer registration-cum-attendance app which has been developed to monitor the attendance and hours of service by the volunteers who are later encouraged by giving certificates based on their hours contributed.

To strengthen this initiative, Vijay Kumar, DCP-Traffic, Cyberabad Police, in association with SCSC, motivates volunteers and guides them. Volunteers capture traffic violations and share them with traffic police for raising e-challans. So far more than 20,000 e-challans have been raised with the help of these volunteers. Every volunteer is provided with a kit comprising of Jacket, Mask, Cap & a whistle.

"Looking at the behaviour of some of the road users and seeing that even educated citizens who are aware of all rules do not obey them, we felt there is a need to contribute towards awareness and also help Traffic Police regulate ever growing traffic in IT corridors. we started this initiative of volunteering in 2014," said Krishna Yedula, General Secretary (SCSC).

"While there are many volunteers who registere and show interest, the most passionate only come on to the roads regularly to spend 1 to 3 hours on a daily basis. They are making a difference to society with their contribution beyond their call of duty. I salute these volunteers for whom rain or shine doesn't matter at all," added Krishna.

Anumod, a volunteer from Microsoft says " I used to face traffic problems while returning home from office. I use to see people driving recklessly not following traffic rules. That is when i came across SCSC and enrolled my name for it by helping the traffic authorities to clear the traffic and sharing their load makes me happy and proud at the same time."

Vidya Sagar Jaga from ICICI says: "During peak hours the traffic gets very bad and everyone is in a hurry and want to just jump over you. No one follows rules and sometimes traffic officers are also ignored. All this used to irritate me a lot. I have a responsibility to maintain peace on the roads and to reduce traffic violations."

Mahesh from SITEL says, "The traffic in Hyderabad is very bad and it gets worse in peak hours our traffic officers sometimes find it difficult to manage the traffic and report any violation at the same time. Traffic volunteering initiative is helping citizens to come forward and help avoid traffic snarls and violations. I feel very proud contributing for this initiative."

P Bhadari Rani from TCS says " It is impossible to go from Panjagutta to Kukatpally during peak hour without getting stuck for an hour in traffic. Volunteering really helps."