Danger of corruption in Mozambique Mass denounced by the Pope 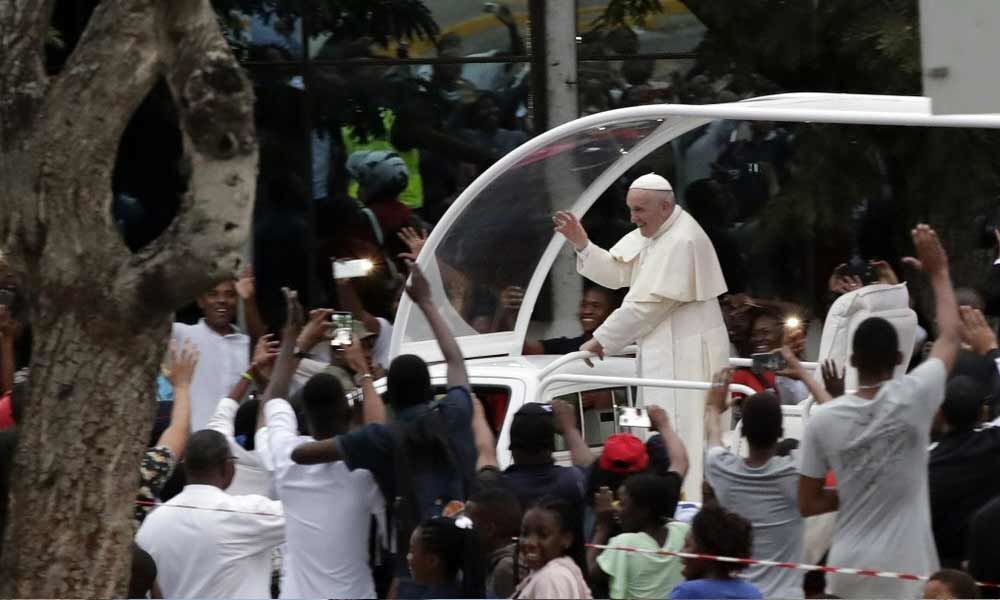 Pope Francis wrapped up his visit to Mozambique on Friday by consoling HIV-infected mothers and children and denouncing the rampant corruption that has helped make the southern African nation one of the world’s poorest countries.

MAPUTO, Mozambique: Pope Francis wrapped up his visit to Mozambique on Friday by consoling HIV-infected mothers and children and denouncing the rampant corruption that has helped make the southern African nation one of the world's poorest countries.

Francis received a raucous welcome at both a medical centre specializing in AIDS treatment and a rain-soaked sports stadium full of singing and dancing faithful, evidence of his popularity in a country where Catholics represent less than a third of the population.

At the Mass, Francis urged an estimated 60,000 Mozambicans to continue on the path of post-civil war reconciliation. But he warned of the dangers of corruption and the injustices committed when public officials claim to help the poor but have personal interests at heart.

"Mozambique is a land of abundant natural and cultural riches, yet paradoxically, great numbers of its people live below the poverty line," Francis told the faithful at Mass in the Zimpeto stadium. "And at times it seems that those who approach with the alleged desire to help have other interests. Sadly, this happens with brothers and sisters of the same land, who let themselves be corrupted."

Mozambique is ranked among the most corrupt countries by Transparency International, which cites recent estimates that corruption cost Mozambique some $4.9 billion from 2002-2014.

More recently, Mozambique plunged into financial crisis in 2016 after a scandal came to light involving some $2 billion in undisclosed government-guaranteed loans that were ostensibly meant to acquire fishing vessels but instead went to three state security services to buy weapons.

The International Monetary Fund and other international donors stopped providing aid to Mozambique after learning of the concealed loans, setting off a debt crisis. A former foreign minister is awaiting extradition to the U.S. to face charges in the scandal.

Francis appeared to refer to the scandal in his homily when he referred to corrupt public officials, saying, "It is very dangerous to think that this is the price to be paid for foreign aid."

Francis has frequently denounced corruption during his foreign trips, insisting that political leaders must always put the common good of their people before their own personal interests. He has frequently urged young people in poor countries in particular to resist the temptation of taking bribes and kickbacks.

Before the Mass, Francis met with HIV-infected mothers and children at the Zimpeto medical center on the northern outskirts of the capital, Maputo. It is the latest to be opened by the Sant'Egidio community, a Rome-based charity that helped broker Mozambique's 1992 peace accord and then launched a comprehensive AIDS initiative to provide antiretroviral therapy to infected Mozambicans. Since the DREAM project was launched in 2002, some 200,000 people have been treated.

Many of them are pregnant women who received therapy to prevent transmission to their unborn children. According to the World Health Organization, sub-Saharan Africa remains the most severely affected region, with 1 in 25 adults living with HIV, more than two-thirds of the global total. In Mozambique last year, 2.2 million people were living with HIV, 60 per cent of them women, according to UNAIDS.

Mozambique, which endured a 15-year civil war, has one of the highest HIV prevalence rates in the world at nearly 13 per cent. Sant'Egidio says the rate is 23 per cent in Maputo.

Francis, who famously washed the feet of HIV-infected people while archbishop of Buenos Aires, praised the willingness of the hospital staff to embrace a seemingly impossible task.

"This centre shows us that there are always people ready to stop and show compassion, who do not yield to the temptation to say "There is nothing to be done" or "It's impossible to fight this scourge"″ he said. "Instead, you have set about finding solutions. You have heeded the silent, almost inaudible, cry of countless women, so many of them living in shame, marginalized and judged by all. "

He urged staff and patients alike to keep hope alive, and always be willing to reach out to someone in need.

"Having emerged from the nightmare of suffering, and without concealing their condition, they are now a sign of hope for many persons," Francis said of those treated for HIV. "Their willingness to dream can serve as an inspiration to many people lying on the wayside who need a welcoming hand."

The Catholic Church has poured tremendous resources into HIV-AIDS treatment programs across Africa. But AIDS activists still fault the church for its refusal to emphasize condom use as a way of preventing transmission. Church teaching rejects the use of condoms as part of its overall teaching against artificial contraception. Senior Vatican officials have long advocated fidelity in marriage and abstinence from premarital sex as key weapons in the fight against AIDS.

Retired Pope Benedict XVI reignited a firestorm over the issue in 2009 when during his first trip to Africa, he said condoms only made the AIDS epidemic worse.

Francis visited the Zimpeto Hospital and celebrated the final Mass before flying to Madagascar for the second leg of his weeklong trip to Africa.

In his homily at Mass, Francis made a brief reference to an Islamic extremist insurgency in northern Mozambique's Cabo Delgado province. More than 20 people have been abducted and beheaded by the extremists. No group had claimed responsibility for the killings, but in recent months the Islamic State group has claimed it is behind the attacks, including one recently in which nine people were killed.

In his homily, Francis urged Mozambicans to persevere with efforts at reconciliation following the country's civil war. He warned that progress in peace was not a given and that there were fears that "past wounds will reopen and reverse the progress already made toward peace, as in Cabo Delgado."