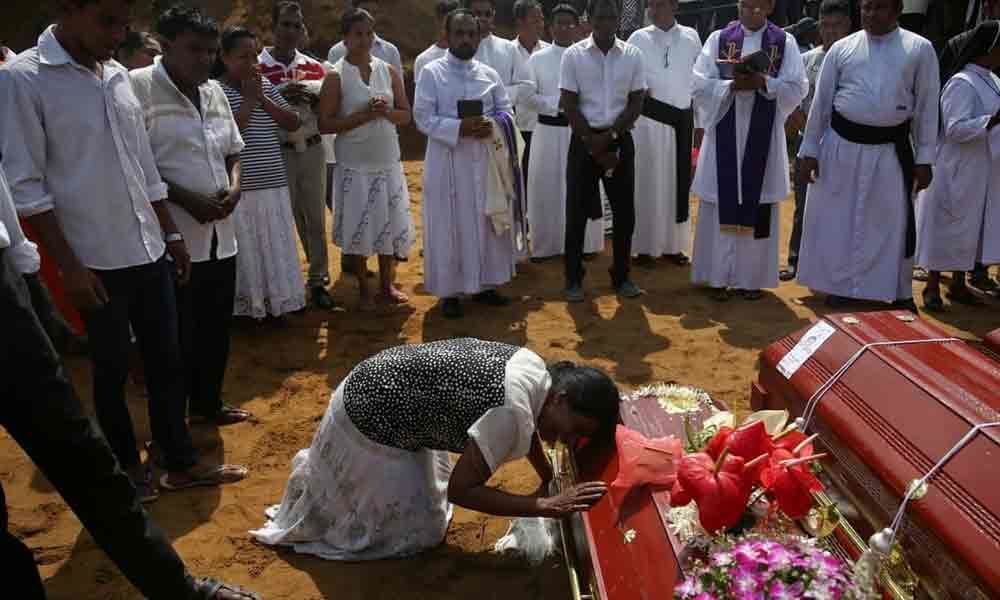 Islamic State has claimed responsibility for the Easter bombings in Sri Lanka that killed 320 people, the group’s Amaq news agency has said.

Colombo: Islamic State has claimed responsibility for the Easter bombings in Sri Lanka that killed 320 people, the group's Amaq news agency has said. The terrorist group gave no evidence for its claim on Tuesday and has made a series of false claims in recent years. However, experts have said the suicide bombings of three churches and three luxury hotels bear the hallmarks of the group.

Sri Lanka's Prime Minister Ranil Wickremesinghe said on Tuesday that there could be more explosives and militants "out there". He acknowledged that there was a prior warning of the attacks and said some officials would likely lose their jobs over intelligence lapses. He also revealed there was a fourth failed attack on another major hotel and that the Indian embassy was also a possible target.

Footage has also emerged of a suspected suicide bomber entering St Sebastian's church in Negombo moments before the attack there. The subsequent explosion, not shown in the video, was the deadliest of the series of coordinated bombings in Sri Lanka on Easter Sunday, with at least 110 people thought to have been killed.

The footage was broadcast widely on Sri Lankan news channels. Earlier, Sri Lanka's Defence Minister Ruwan Wijewardene said the attacks were a response to the recent mass shooting of Muslim worshippers in Christchurch in New Zealand.

"The preliminary investigations have revealed that what happened in Sri Lanka was in retaliation for the attack against Muslims in Christchurch," Wijewardene told a special sitting of parliament, referring to the terrorist attack by a white supremacist in March in which 50 people were killed. The minister did not present any evidence for his claim.

An intelligence memo circulated to some in government in the weeks before the attack noted that one member of the terrorist group, since named as a perpetrator, had started to update his social media accounts with extremist content after the New Zealand shootings.

But terrorism researchers have said the sophisticated nature of the attack and the equipment used would probably have required months of preparation, including target reconnaissance, recruiting of the suicide bombers and obtaining explosives. One emerging scenario among western and south Asian security officials was that the IS group had established a connection with existing Lankan networks of extremists already attracted by its ideology, but who lacked organisation and experience.

Lankan veterans who had fought for ISIS in Syria or Iraq may have acted as "connectors", one South Asian official said, pointing to the group's operations in Bangladesh in recent years as an example of how it had learned to "subcontract" to local militants. The ISIS claim was issued used terms familiar from previous such statements, citing "security sources" and describing the attackers as "fighters" of the group.