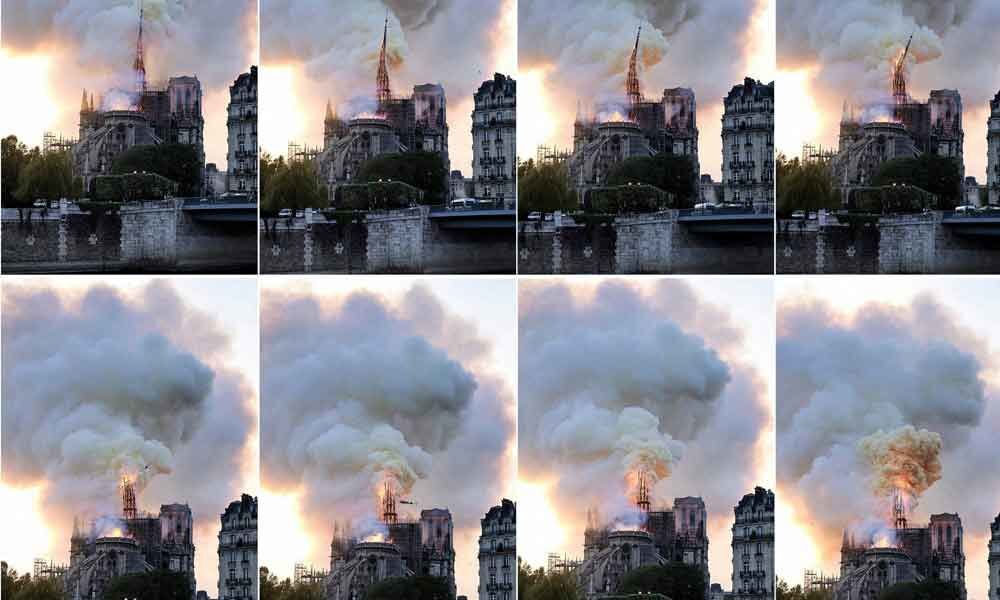 Hundreds of millions of euros have been pledged to help rebuild the partially destroyed Notre Dame Cathedral, the 850-year-old Unesco world heritage, as a fire that ripped through the Paris landmark was extinguished on Tuesday.

Paris: Hundreds of millions of euros have been pledged to help rebuild the partially destroyed Notre Dame Cathedral, the 850-year-old Unesco world heritage, as a fire that ripped through the Paris landmark was extinguished on Tuesday.

The fire could be extinguished some 15 hours after it began on Monday evening, but emergency services said they were still working to douse the hot spots.

The blaze ravaged the iconic building's roof and caused the collapse of the Cathedral's spectacular Gothic spire and the destruction of its roof structure.

However, the fire-fighters who worked through the night managed to save the Paris landmark's main stone structure, including its two towers. Though the cause of the fire was not yet clear, officials believe it could be linked to extensive renovation works.

The Paris prosecutor's office said it was currently being investigated as an accident.

Offers of help with the reconstruction also poured in from around the globe, with European Council President Donald Tusk calling on EU member states to rally round.

French billionaire Bernard Arnault announced that he and the LVMH luxury conglomerate he controls would donate 200 million euros for the reconstruction efforts.

"I'd like to say words of comfort and solidarity with the French nation, also as a citizen of Gdansk, 90 per cent destroyed and burnt, later rebuilt," said Donald Tusk. "You will also rebuild your cathedral," he added, calling on all 28 member states of the EU "to take part in this task."

Macron described the blaze as a "terrible tragedy" and pledged to raise funds worldwide. "Notre Dame is our history, our literature, part of our psyche, the place of all our great events, our epidemics, our wars, our liberations, the epicentre of our lives.

I solemnly say tonight: we will rebuild it together," Macron said. Paris Mayor Anne Hidalgo said the city would make 50 million euros available and propose holding an international donors' conference to coordinate the pledges to restore the building.

The Notre Dame's foundation stone was laid in 1163 by Pope Alexander III and the Cathedral was completed in the 13th century. It is one of Paris' most popular attractions, drawing an estimated 13 million visitors a year.