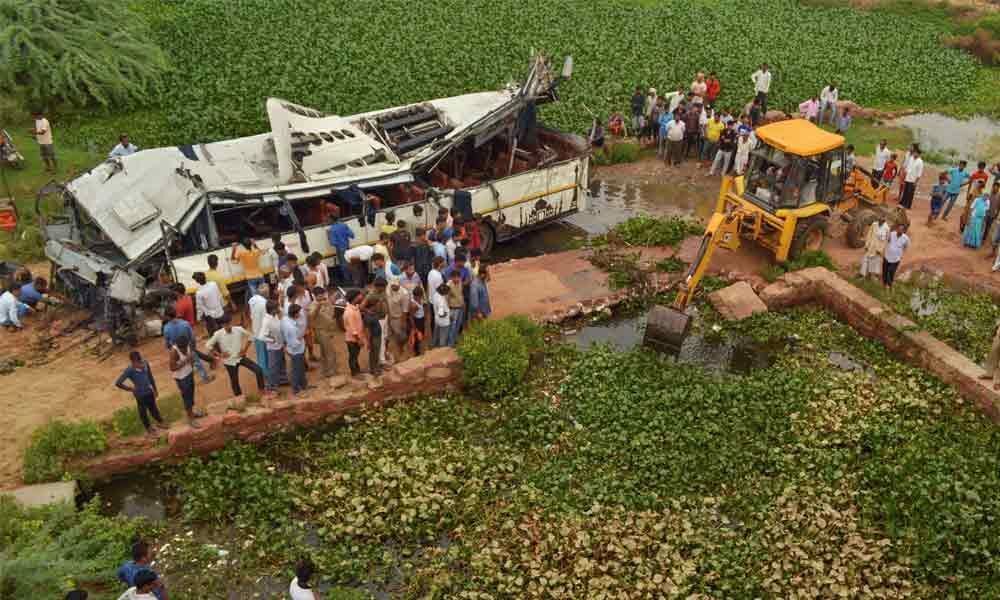 Bus falls into gorge on the Agra-Lucknow Expressway

Agra : At least 29 people were killed on Monday when a passenger bus fell into a gorge on the Agra-Lucknow Expressway.

The bus, after hitting the divider, fell into the 40-feet-deep gap between two flyovers on the Yamuna Expressway near Milestone 161 (Jharna nallah) under Etmadpur police jurisdiction of Agra district at around 4.15 a.m.

The double-decker bus with about 50 passengers on board was heading to Delhi from Lucknow.

Police reports said that 20 passengers have been rescued so far and efforts were on to rescue the rest.

Initial reports suggest that the accident occurred after the bus driver of the UPSRTC Jan Rath dozed off at the wheel.

Chief Minister Yogi Adityanath constituted a committee to go into the reasons behind the accident and submit its report early, Additional Chief Secretary, Information, Awanish Awasthi said. "As per the district magistrate (Agra) 29 persons have died.

The bus fell into a 'nallah' (drain)," he said. Uttar Pradesh Roadways will pay an ex-gratia amount of Rs 5 lakh to the next of kin of the deceased, officials said.

The chief minister expressed his condolences and asked the Agra district magistrate and senior superintendent of police to ensure the injured get proper medical treatment, they said.

He sent his deputy Dinesh Sharma and Transport Minister Swatantra Dev Singh to the accident site by air.

The committee, comprising the transport commissioner, the Agra divisional commissioner and an inspector general of police, will investigate the incident in 24 hours, the chief minister directed.

Two aspiring army men and a few brave villagers, out for morning ablutions, were among the daredevils who risked their lives to save around 20 people.

Congress leader Rahul Gandhi condoled the death. Gandhi said he is pained by the news of the accident on Yamuna Expressway.