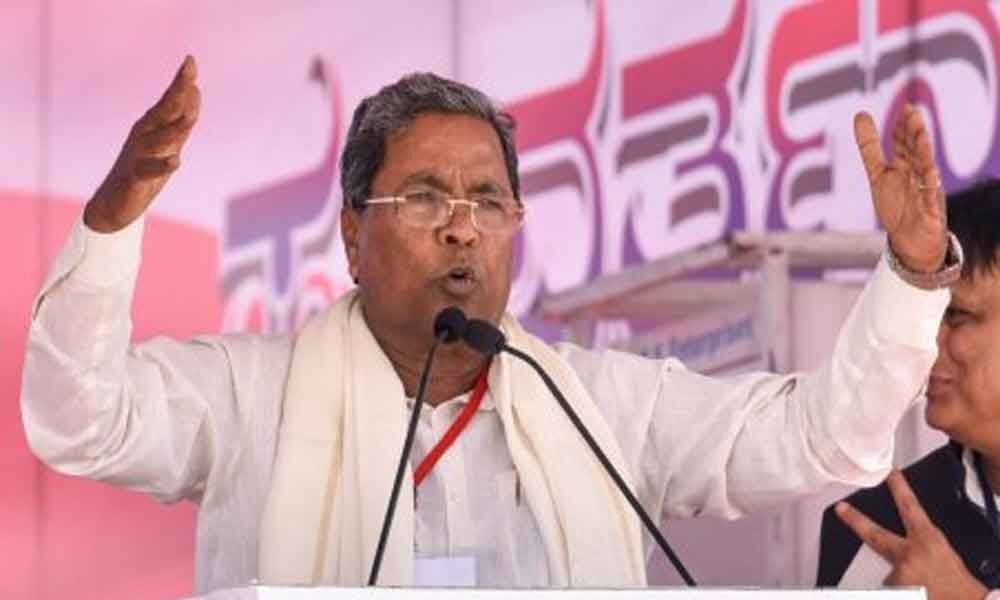 He said the mood of the country is clearly in favour of bringing in a UPA government to reject communal and divisive forces.

Mysore: The country was heading towards a coalition government as neither the Congress nor the BJP are unlikely to get an absolute majority despite claims by political leadership, former Karnataka Chief Minister Siddaramaiah said Monday.

He said the mood of the country is clearly in favour of bringing in a UPA government to reject communal and divisive forces. The senior Congress leader observed that neither of the two national parties were in a position to cross the 150 mark out of 543, despite claims to the contrary by BJP leaders including Prime Minister Narendra Modi.

In Karnataka, he said the Congress along with its ally JD(S) is expected to win around 20 seats out of 28 parliamentary constituencies. The first phase of polling is scheduled on April 18 in the state.

Talking to PTI in an exclusive interview during a campaign trail, Siddaramaiah said: "Both Congress and BJP appear not to be in a position to get an absolute majority on their own. The UPA will however get a clear majority."

Holding that claims and reality are two different things, he said there is no Modi wave. On the contrary, there is a growing wave of people wanting to curb divisive and communal forces. This has put full stop to the second term for the NDA.

"According to me, the UPA will get enough seats and will emerge as a single largest front. Naturally, other regional parties will rally around," he said and added the Mahagathbandhan (the grand-alliance) has taken place so that the secular votes are not divided.

Siddaramaiah, who is also chairman of the Congress-JD(S) coalition committee in the state, is however, confident that the Congress will be able to make a major in roads in Karnataka along with the JD(S), limiting the BJP to anywhere between 8 and 10 seats out of 28 parliamentary constituencies.

The Congress, which is contesting 21 seats in the state, would win 13-14 seats and its ally JD(S) will take the combine tallly to around 20, he said. Rubbishing claims that there was lack of coordination between Congress and JD(S) workers resulting from an unfair allocation of seats, he said the two parties were in perfect harmony and the campaigning was going on satisfactorily.

"This issue has been verified because myself and JD(S) chief H D Deve Gowda jointly toured all constituencies. Look, myself and G T Devegowda of JD(S) fought against each other during the last assembly elections, now we have come together. We have asked workers to work together," he said.

Three out of seven seats allocated to JD(S) are being contested by former Prime Minister H D Deve Gowda and his two grandsons, forcing the JD(S) leadership to concentrate on three constituencies of Tumkur, Mandya and Hassan. Gowda is contesting from Tumkur, his grandson and chief minister H D Kumaraswamy's son Nikhil Kumaraswamy from Mandya and elder son H D Revanna's son Ujwal Revanna from Hassan.

Asserting that Congress-JD(S) alliance will benefit in this Lok Sabha poll, Siddaramaiah said, "Our vote share will be definitely more than the BJP. Both voters, irrespective of what Congress and JD(S) got in the assembly poll, put together will get more votes."

On too much of Modi bashing in election campaign, he said, "It is because Modi is prime minister of this country and has completed five years. Who else should I attack? If you attack Modi, it means we are attacking the RSS. He is a symbol of RSS."

"There were 12 surgical strikes in the past. In the first war against Pakistan in 1948-49, Narendra Modi was not even born then. In 1977, when Indira Gandhi was PM and Bangladesh was liberated, where was he? Was he a soldier in Indian army?" Siddaramaiah said adding these surgical strikes are taking place frequently in the country after Independence.

Even the BJP's manifesto talks of the same old issues such as scrapping of Article 370 and construction of Ram temple. "It is raising emotional and very old issues. These issues were there since 1982," he noted.