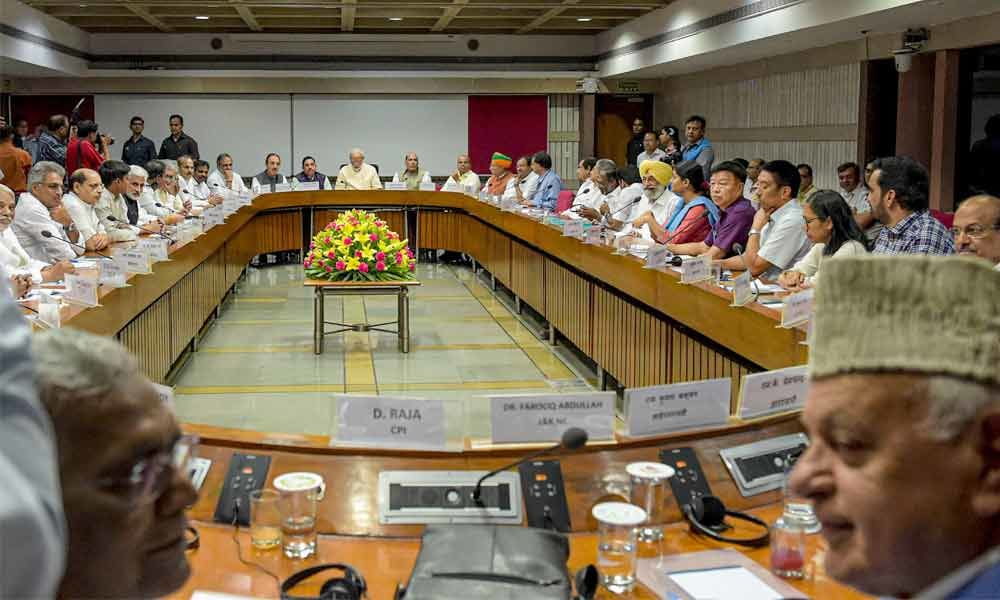 PM Narendra Modi chairs an all-party meeting ahead of the budget session of Parliament, in New Delhi on Sunday
Highlights

A day before the budget session of Parliament, the Congress on Sunday raised with the government issues of unemployment, farmers distress, drought,...

New Delhi: A day before the budget session of Parliament, the Congress on Sunday raised with the government issues of unemployment, farmers distress, drought, and press freedom, while also calling for early conduct of Assembly polls in Jammu & Kashmir.

At an all-party meeting called by the government, the Opposition parties demanded discussion on all such issues in Parliament, with the Congress asserting that it is still a "fight of ideologies".

The Opposition also strongly raised the issue of women's reservation bill with Trinamool Congress leaders Sudip Bandyopadhyay and O'Brien asserting that the bill be listed and passed in the current session of Parliament.

The Opposition also flagged concerns over weakening of federalism and asserted that "deliberately targeting of states is unacceptable".

He said the Congress is the foundation of secular forces and will always work to keep that spirit alive whether it is in government or in opposition.

"Even when out of power, we will continue to work for the upliftment of farmers, labourers and women. We also said that there are some issues that the government should pay attention to such as those of the farmers, drought, lack of drinking water, and massive unemployment in the country," Azad said.

The government needs to immediately pay attention to unemployment that has increased in the last five years, he asserted. "We also raised the issue of freedom of press. The behaviour of ruling party workers towards journalists was also raised.

They (journalists) are being beaten and efforts are being made to muzzle their voice. We condemn that and urged the government to look into it," he said.

The TMC raised the issues of electoral reforms, including state funding of elections and paper ballots.

The party also flagged the Opposition's concerns over the government's use of ordinances, saying that in the spirit of the Constitution this should be used only as an "emergency" tool.

"Unfortunately, in the 16th Lok Sabha it was blatantly overused. Highest percentage of ordinances in 70 years," Bandyopadhyay and O'Brien said.