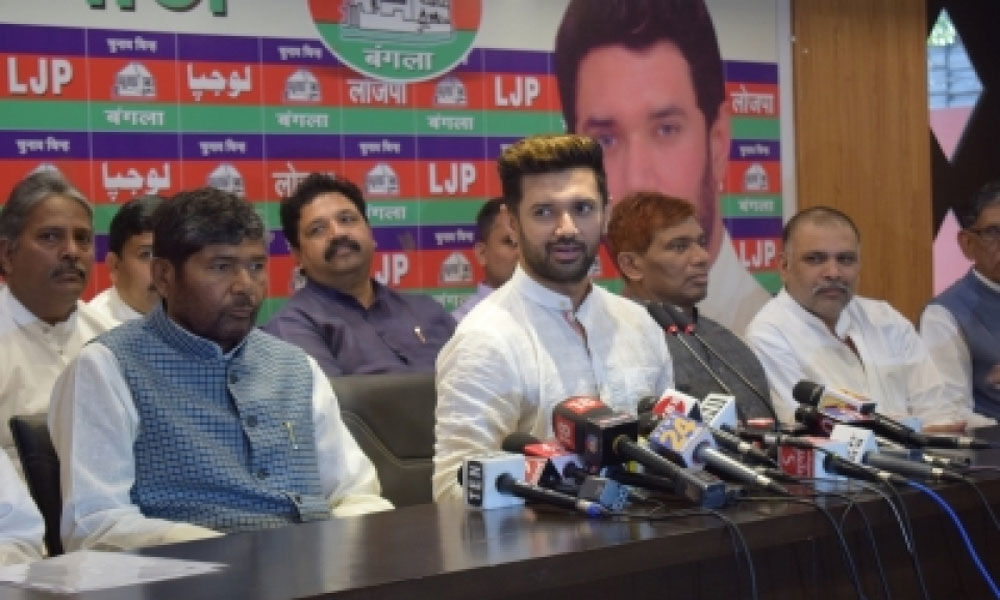 The Lok Janshakti Party (LJP) on Monday finalised the names of candidates for the six constituencies it will contest in Bihar. It will announce them by Wednesday.

New Delhi:The Lok Janshakti Party (LJP) on Monday finalised the names of candidates for the six constituencies it will contest in Bihar. It will announce them by Wednesday.

Addressing a press conference here, the party's Parliamentary Board Chairman Chirag Paswan said candidates for the Hajipur, Vaishali, Samastipur, Jamui, Nawada and Khagaria seats were finalised in the meeting.

"We are sad due to the demise of former Defence Minister Manohar Parrikar ji. It is a big loss to politics. As the nation is mourning his death, we are not going to announce the names of our candidates today," he said.

The announcement would be made in the next two days, he added.

Under the National Democratic Alliance (NDA) seat sharing arrangement, the Bharatiya Janata Party (BJP) and the Janata Dal-United (JD-U) will contest 17 seats each, while the LJP will contest on six seats in Bihar.

Chirag Paswan, who is the son of Union Minister and LJP chief Ram Vilas Paswan, said he was confident that the NDA would win as many as 37 of the total 40 seats.

"No one should be surprised if we win all 40 seats. But I can confidently say that we will win 36-37 seats for sure," he said.

The LJP leader said he had good relations with Giriraj Singh, Union Minister and incumbent BJP MP from Nawada -- the seat which has now gone to the LJP.

"I am sad to hear that Giriraj Singh ji is disappointed. But I am sure I am not the reason for his disappointment," said Paswan and added that the decision was taken during the seat sharing negotiations between all the NDA constituents.