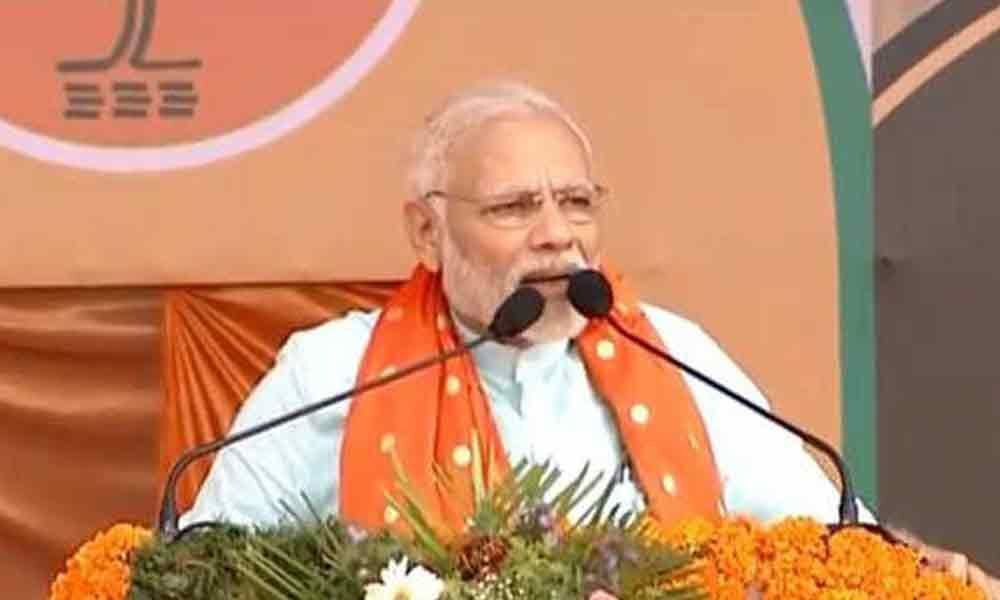 Prime Minister Narendra Modi on Saturday launched a mega plantation drive in Uttar Pradesh by planting a sapling at a primary school in Varanasi.

Varanasi, July 6: Prime Minister Narendra Modi on Saturday launched a mega plantation drive in Uttar Pradesh by planting a sapling at a primary school in Varanasi.

On his arrival, Modi unveiled a tall bronze statue of late Prime Minister Lal Bahadur Shastri, outside the terminal building of the Varanasi airport.

The plantation drive was launched at Harahua primary school in Anand Kanan forest on the Panch Kosi Marg where Lord Shiva was believed to have stayed with Parvati for some time.

A total of 27 lakh saplings and trees were being planted with the help of farmers and residents to increase the green cover in Varanasi.

Five children who have been named as 'Bal Vriksha Mitra' also planted saplings. These children will be responsible for the upkeep of these saplings.

The Yogi Adityanath government has planned reconstruction of this route at a cost of Rs 97 crore, while Rs 4 crore has already been spent on developing basic infrastructure.

Bharatiya Janata Party (BJP) state co-in charge Sunil Ojha said: "The party has pledged to make the mega plantation drive a grand success. The drive has to be launched in the entire district to ensure plantation of over 27 lakhs saplings, but the BJP is focusing on massive plantation along the Parikrama route where 60,000 saplings will be planted."

Divisional Commissioner Deepak Agarwal said: "The mega plantation drive launched by the Prime Minister will continue till the end of September."

The Panch Kosi Parikrama road is a stretch of 25 'kos' (about 78 km) area for circumambulation surrounding the city. It has five 'padavs' (halts) at Kandva, Bhimchandi, Rameshwar, Shivpur and Kapildhara.

As per the Hindu calendar and tradition, Panch Kosi Yatra takes place every third year in Purushottam month and thousands of pilgrims participate in it.

The state tourism department has already been directed to prepare a proposal for improving public convenience, food outlets and other facilities along the route on public, private partnership model.

The Prime Minister was welcomed at the airport on his arrival by BJP working President J.P. Nadda, Adityanath, state BJP President Mahendra Nath Pandey and other ministers.