Results of Kerala polls, beginning of Congress's return to Delhi in 2024 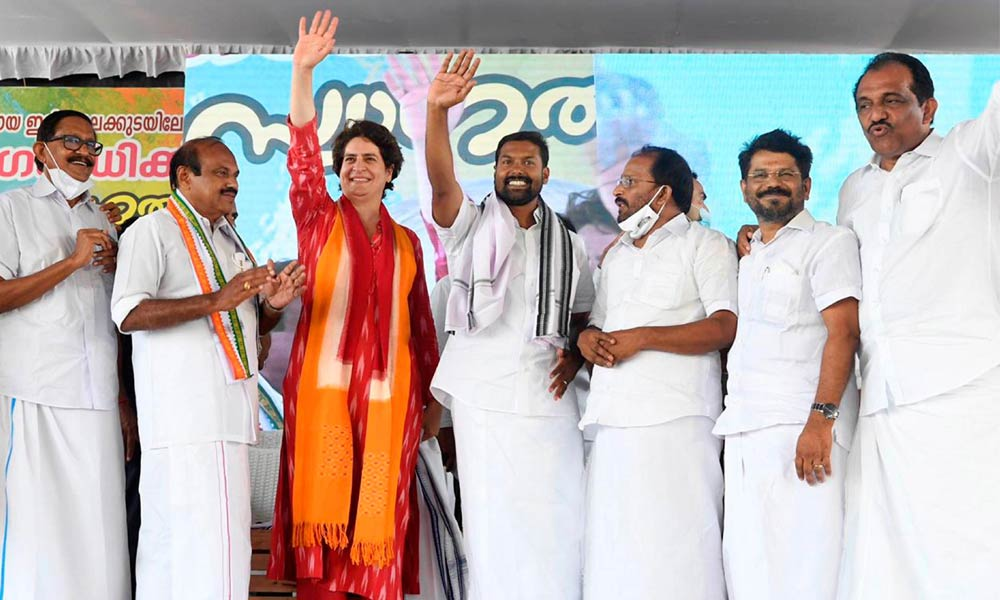 Congress leader Priyanka Gandhi Vadra waves at the crowd during a public meeting for Kerala Assembly polls, at Irinjalakuda, Thrissur on Wednesday

The Kerala poll results along with those of other states will mark the beginning of the Congress' comeback nationally and its return to Delhi in 2024, former Kerala chief minister Oommen Chandy said on Wednesday

New Delhi (PTI) The Kerala poll results along with those of other states will mark the beginning of the Congress' comeback nationally and its return to Delhi in 2024, former Kerala chief minister Oommen Chandy said on Wednesday. Chandy, who is among the top contenders to be the chief minister if the Congress-led United Democratic Front (UDF) gets a majority in the Kerala polls, said there would be "no problem" in the selection of the CM after the polls if voted to power and the high command's decision in the matter would be acceptable to all the leaders.

In a telephonic interview with PTI, the former Kerala chief minister also asserted that the BJP would remain a marginal player in the polls like last time when it had won just one seat. Expressing confidence that the UDF would come to power, Chandy said the Left Democratic Front (LDF) in the last assembly elections made so many promises but could not fulfil any of them and asserted that the people can see the difference between the LDF and the UDF.

"The slogan of UDF is development and care, development of state and care stands for special attention to the weaker sections. We fulfilled our promises (when in government)," said Chandy, who was the chief minister from August 2004 to May 2006 and then from May 2011 to May 2016. The LDF made so many allegations against the previous UDF government, claiming that there was a lot of corruption, but in the last five years they could not do anything or proceed in a single case, he asserted.

Chandy said the UDF was not afraid of the BJP and was fighting it with full might. Pointing to an alleged Left-BJP collusion, he said they are fighting each other in front of the public but their fight is with the common aim of defeating the Congress. "There is a strong rumour that they have a secret arrangement to defeat the Congress," said Chandy. On the entry of 'Metroman' E Sreedharan on the side of the BJP, he said Sreedharan is a "good person and a very good technocrat", but his decision to enter the political fray was "not correct".