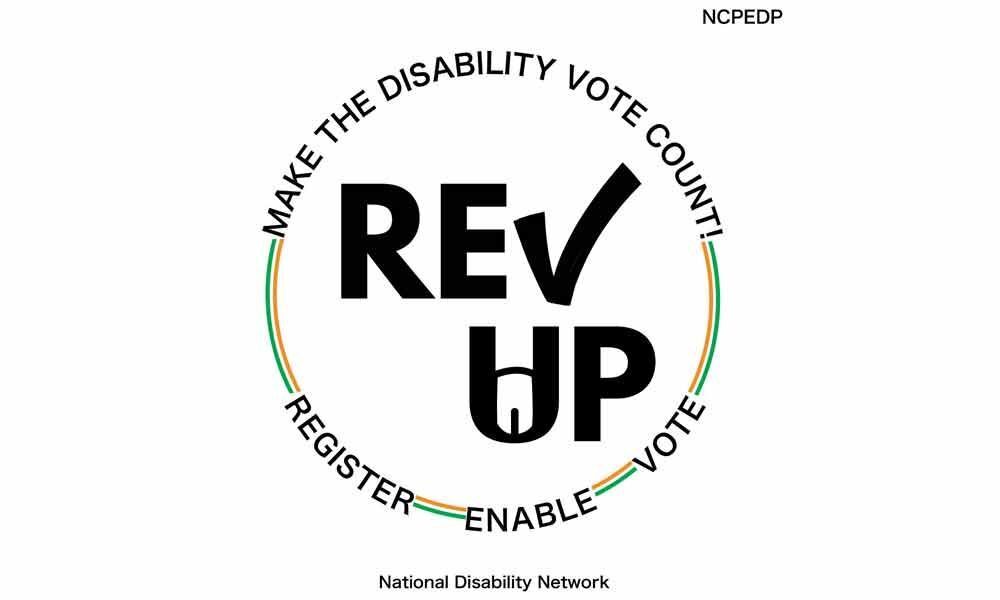 New Delhi/Mumbai: The world's largest democracy will hold its general elections between 11th April and 19th May, 2019.

To encourage greater voting by persons with disabilities, The National Centre for Promotion of Employment for Disabled People (NCPEDP) together with the National Disability Network has launched a public interest campaign titled 'REV-UP- Register, Enable, Vote.'

Coena Mukherjee, a girl with cerebral palsy, who interns at The Network,Mumbai and is a student of HMMRA Mumbai, has been part of the development of the campaign. 'REV-UP- Register, Enable, Vote' is a collaborative effort on behalf of citizens and Government alike.

Coena's courage to pursue education and contribute has been applauded by Smriti Irani, the HRD Minister, via a letter to her in 2015.

Reeta Gupta of The Network who guided Coena to develop the campaign says, " REV-UP is a positive campaign that we have developed for NCPEDP and the National Disability Network. It brings together every disability rights organisation in the country; and all corporates who support disability rights. The positive mood of the campaign is to recognise the sincere efforts made by the election commission of India (ECI), to facilitate advance voting or early voting, voting from home, postal vote, transport assistance or mobile polling station concept, provided these do not compromise the sanctity and secrecy of vote."

Dia Mirza and producer Deepshikha Deshmukh have already shared the campaign and message on social media. Esha Deol too shared on Twitter.

Arman Ali, ED, NCPEDP says, " To REV-UP is to speed up, revolutionise or energise. Electoral participation is an ongoing fight. When the Persons with Disabilities (Equal Opportunities, Protection of Rights and Full Participation) Act, 1995 was passed, there was no mention of voting rights. From then to now, it has been a constant struggle for us to make our voice heard."

On a more holistic note, the campaign is also about REVVING UP participation of PwDs in the electoral process as candidates and representatives.

"There is a quota for SCs, STs, social workers, women. In the Rajya Sabha out of 250 members, 12 are nominated by the President of India from amongst persons who have special knowledge or practical experience in respect of such matters as sports, literature, science, art and social service. Persons with disabilities can surely be included in this quota. Political participation by contesting is one aspect but there should be one for representation as well," adds Arman.

Elections for persons with disabilities is today more of an urban phenomenon and needs to spread to the rural areas. This needs to be identified- and the campaign should reach even the remotest part of India so that everyone has an opportunity to vote. And every citizen of India, who knows that their family member or neighbour is a person with disability can take them along for voting.

It is obvious that one voice with disability in the Parliament will add sensitivity to every conversation, impacting both procurement and legislation. If this is achieved, then automatically, the entire electoral process will move towards greater accessibility.