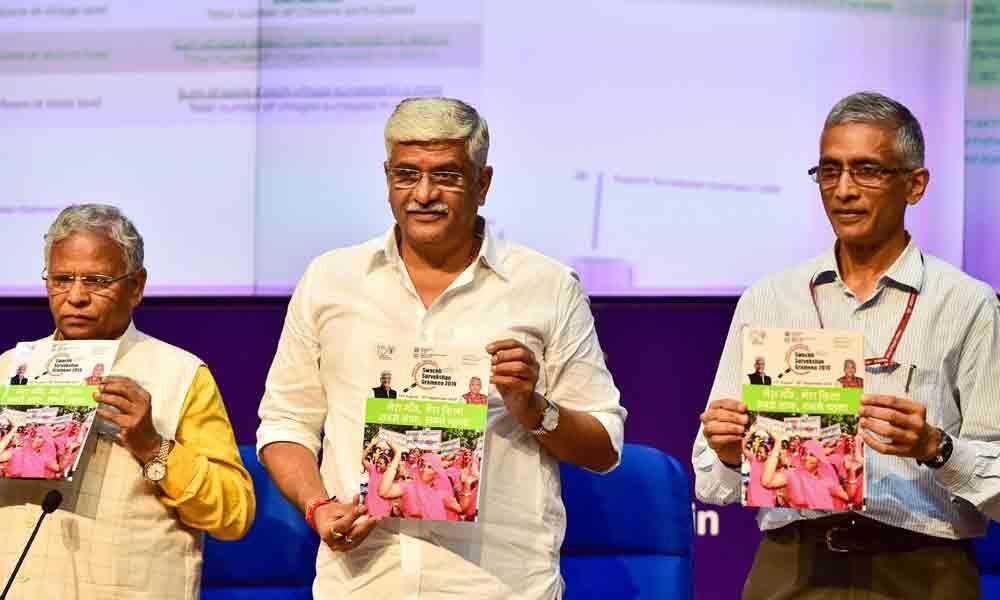 Union Jal Shakti Minister Gajendra Singh Shekhawat on Wednesday launched the 'Swachh Survekshan Grameen 2019', which will be three times bigger in scale than the previous edition of the rural sanitation survey.

New Delhi: Union Jal Shakti Minister Gajendra Singh Shekhawat on Wednesday launched the 'Swachh Survekshan Grameen 2019', which will be three times bigger in scale than the previous edition of the rural sanitation survey.

Around 700 districts and over 17,000 villages will be covered under the survey that will be conducted across 34 states and Union Territories. In the first edition in 2018, the survey covered over 6,000 villages across the country. This year, the focus of the survey will be solid waste and plastic waste management, taking the previous year's exercise centred on making villages open defecation free (ODF) a step ahead, Shekhawat said.

"As we head towards an open defecation free India, the journey does not end here. We need to sustain this momentum to ensure effective implementation of a number of ODF-Plus initiatives across the country," he said.

All 698 districts and 17,475 villages in 34 states and union territories will be covered under the survey, Ministry of Drinking Water and Sanitation officials said. The field survey will be held over 45 days at over 87,000 public places, including panchayats, anganwadis, marketplaces, primary health centres, in 30 villages of every district, they said.

Five public places in each village will be surveyed under the exercise which will conclude on September 30, they added. "It's not just a survey but an opportunity to encourage behavioural change and take sanitation to the secondary level, beyond the concept of open defecation free villages," Shekhawat said.

The minister stressed on employing artificial intelligence to bring more people into the survey's fold. He said the use of technology will ensure accuracy in the exercise. Shekhawat also launched a mobile app through which people can give feedback about the survey. A third-party evaluation of the survey will be done by a private entity, 'Ipsos Research', selected through competitive bidding, the minister said.

The participating states and districts will be ranked using a weightage methodology based on service level progress and citizen feedback, 35 per cent each, and direct observation, 30 percent, the officials said. The government aims to use the survey to reach out to as many as 3 crore people, encouraging them to participate in the survey to create widespread awareness about improved levels of sanitation in the rural parts of the country, they said.