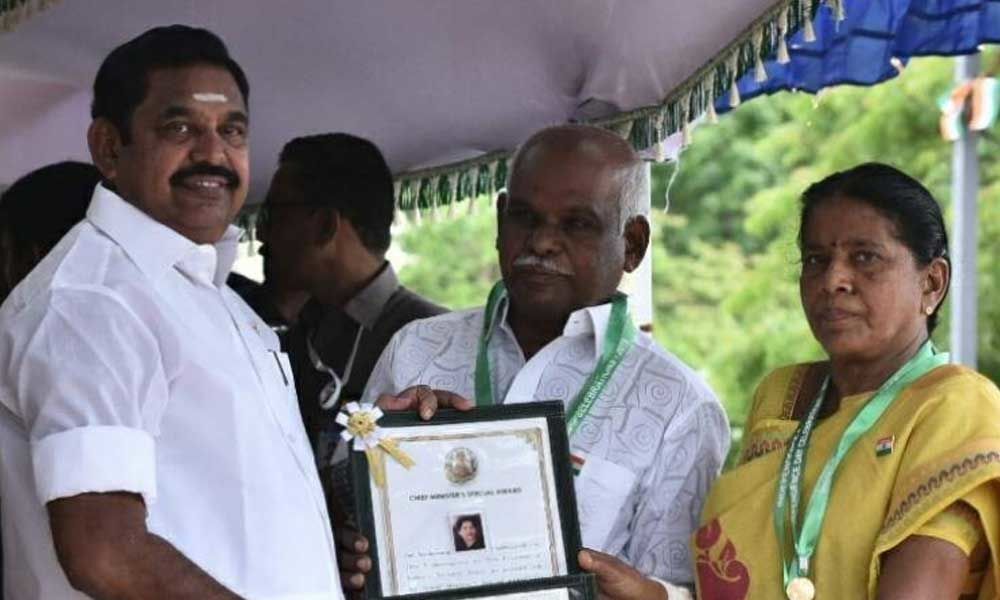 Tamil Nadu Chief Minister K Palaniswami on Thursday gave away awards including the Kalpana Chawla Award for Courage on the occasion of Independence day here.

Chennai: Tamil Nadu Chief Minister K Palaniswami on Thursday gave away awards including the Kalpana Chawla Award for Courage on the occasion of Independence day here.

The Kalpana Chawla award was presented to P Ramyalakshmi, Assistant Director of Fisheries, for her brave action against the use of banned purse seine nets and thereby protecting marine resources and ensuring the sustainable livelihood of traditional fishermen in Cuddalore.

The award carries a medal, a cheque for Rs five lakh and a citation.

Also, Palaniswami honoured P Shanmugavelu, his wife Senthamarai of Tirunelveli district with the Chief Minister's Special Award for an extraordinary act of bravery.

The elderly couple had days ago fought two masked robbers armed with sickles in their farmhouse by throwing random things like a chair at them and the two ruffians took to their heels.

The entire action episode was caught on the CCTV camera installed in their house and the clip later went viral on social media.

While the city police were honoured for installing CCTV cameras and using Facetagr app for detecting crimes, the rural department got the award for rejuvenating Naganathi river in Vellore district under Mahatma Gandhi National Rural Employment Guarantee Scheme.

The commercial taxes department has bestowed the award for its work in aiding traders for easy migration to the GST through initiatives like putting in place an app (mobile application) and a help desk.

The Chief Minister also gave away other awards which includes one for a best social worker and those for recognising work by local bodies.