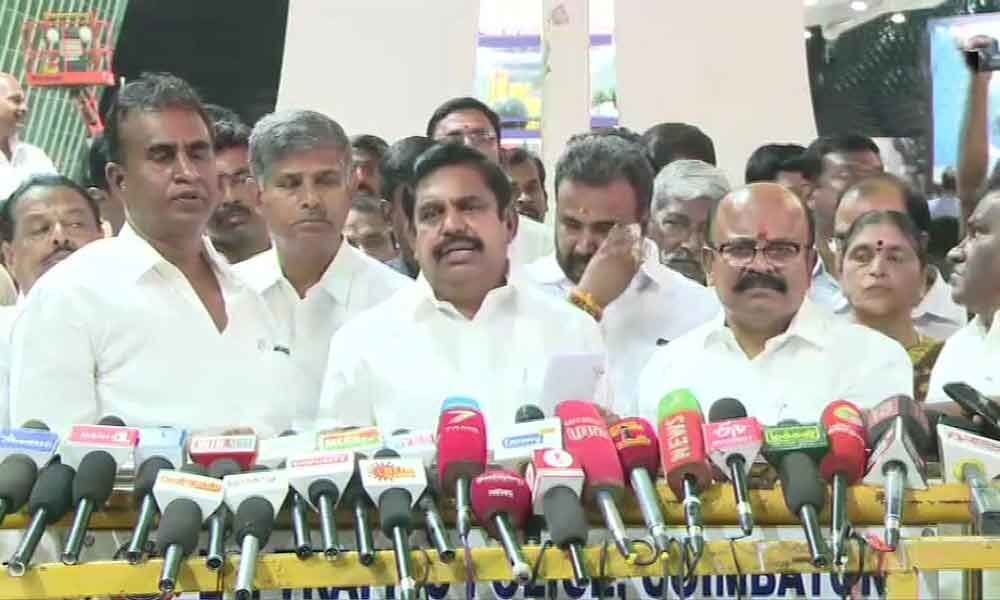 Chennai: Tamil Nadu Chief Minister Edappadi K Palaniswami has refuted reports of an alleged rift between the ruling AIADMK and its ally BJP.

"We (AIADMK) still have an alliance with them (BJP). There is no change. Why is media trying to create confusion on this?" he said while responding to a question posed by reporters here on Thursday regarding 'bitter relations' between AIADMK and BJP post the poll debacle.

As per reports, AIADMK, which won the Theni parliamentary seat, is upset as it was unable to find representation in the Union council of ministers.

On being asked to respond on his tweet on the three-language formula, Palaniswami said he had just suggested that Tamil could be taught as an optional language in other states, adding that the Opposition is trying to create a "major controversy".

"Where did I support three language policy? What I did suggest was a proposal that Tamil could be taught as an optional language in other states. That was all about my tweet. Opposition created a major controversy out of it," he clarified.

Palaniswami had on Wednesday urged Prime Minister Narendra Modi to include Tamil as an optional language in the curriculum across India. He later deleted his tweet.

"Request Honourable PM Narendra Modiji to include Tamil as an optional language for study in other states. This will be a great service to one of the most ancient languages of the world," he had tweeted.

The tweet came at a time when the Centre was forced to revise the new Draft National Education Policy which had suggested a three-language formula, described by many political leaders as the imposition of Hindi.

In the draft National Education Policy 2019, a three-language formula recommended the inclusion of English and Hindi besides mother tongue in non-Hindi speaking states, while Hindi-speaking states were to include English and an Indian language from other parts of the country.

Many leaders from non-Hindi states, especially Tamil Nadu and Karnataka, had opposed the policy.