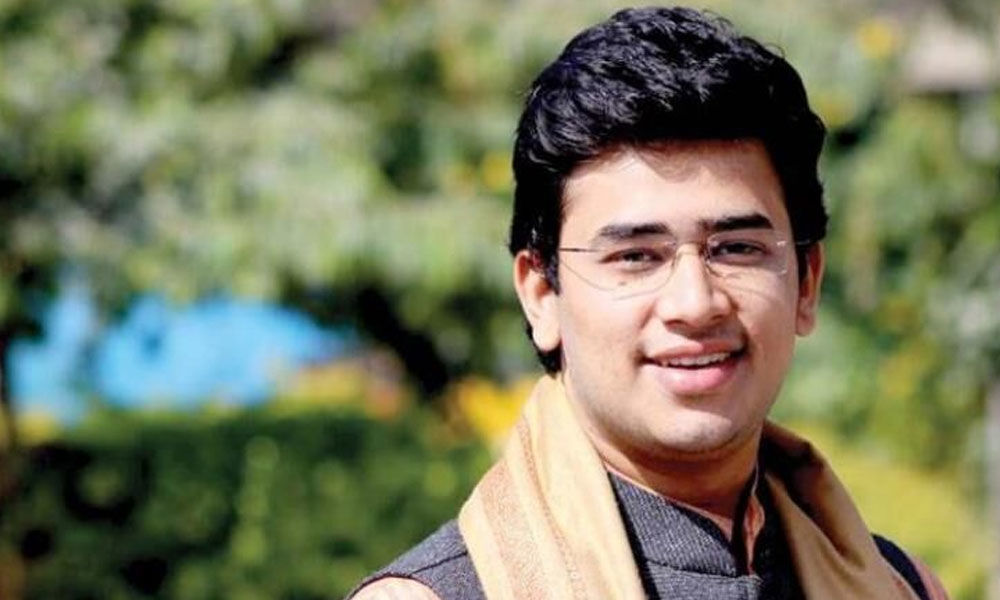 Bengaluru: The Bhartiya Janata Party (BJP) on Tuesday named Tejasvi Surya, the general secretary of its youth wing as its candidate for Bengaluru South...

Bengaluru: The Bhartiya Janata Party (BJP) on Tuesday named Tejasvi Surya, the general secretary of its youth wing as its candidate for Bengaluru South constituency. The party announcing its choice in the early hours of Tueday after deliberating for days over the candidate who will be seen continuing the legacy of late Ananth Kumar, who has held this seat since 1996.

"OMG OMG!!! I can't believe this.PM of world's largest democracy & President of largest political party have reposed faith in a 28 yr old guy to represent them in a constituency as prestigious as B'lore South. This can happen only in my BJP. Only in #NewIndia of @narendramodi," he wrote on Twitter on Tuesday. Surya says he was groomed by the late Ananth Kumar and his wife, Tejaswini who was also in the race for the seat

"Ananthkumar Ji & @Tej_AnanthKumar ma'am have groomed me from my high school days. I had pestered Tejaswini ma'am to send me on Jan Chetna Yatra along with AK Ji. She somehow convinced Sir to take me along. I saw my first Bharat Darshan. You both have made me the man I am today," he tweeted.

The decision to go with Surya comes after the party had convinced Kumar's wife , Tejaswini Ananth Kumar, to take up the mantle."My urge all the BJP karyakartas, friends and well wishers who are anxious and upest & still visting our house in large numbersTime to show we are a 'party with a difference'.We are all committed to tread the path of ideology.

Surya who is also a member of the national social media team will take on B.K.Hariprasad of the Congress.The party had chosen Surya over not just Tejaswini but also local BJP legislators and is likely to face some resistance against its decision to overlook some of them.

"It is shocking to (my workers) and even to me. I have been telling myself it is important to show our maturity, that we are a party with a difference," Tejaswini Ananth Kumar said in an interview to news agency ANI.

"I stand with the party's decision. Let's not start asking questions. If we have to contribute to the country then we have to work for (Prime Minister Narendra) Modi-ji."She referred to defence personnel who worked for the country without bothering about their families. "(My husband) worked all these years. We always worked with the idea of nation first, party next, self-interest last. Now it is the time to show we always believed in that," Tejaswini Ananth Kumar, a social worker and an engineer by qualification, said.

Party sources say in the race for Bangalore South, the party preferred Tejasvi Surya because of his sharp oratory. Many in the BJP argue that will be an asset in a constituency that has intricate caste math.Karnataka BJP chief BS Yeddyurappa, who had recommended her name to his party bosses, said on Monday that she would be the Bangalore South candidate.