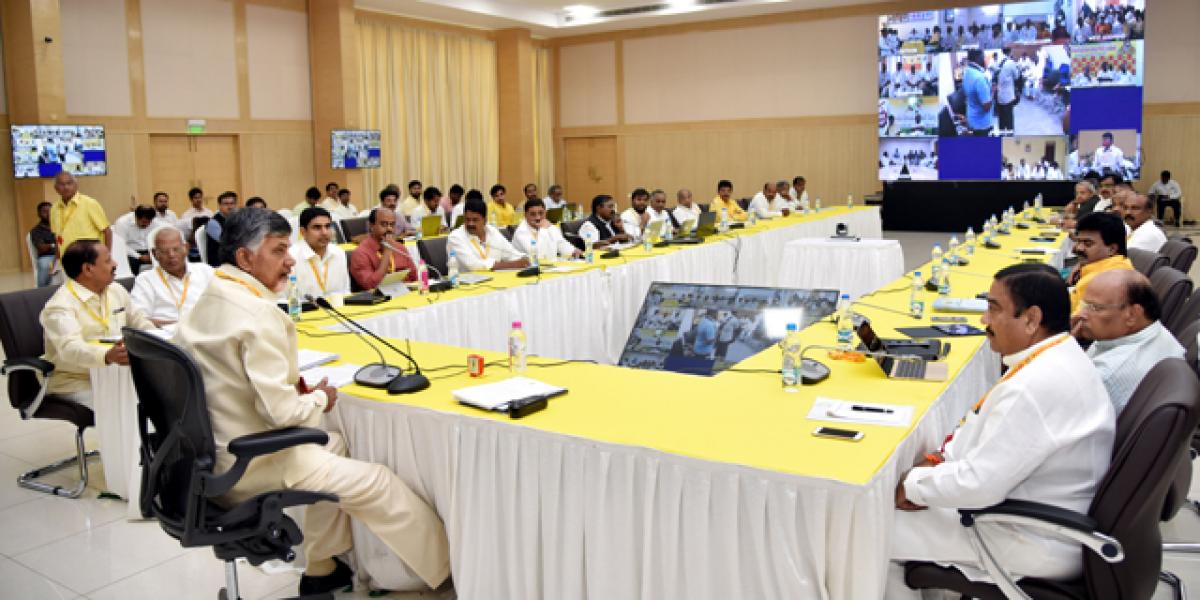 In a significant development, Chief Minister N Chandrababu Naidu has brought up the issue of the special category status (SCS) at the party coordination committee meeting contending that the state should get either the SCS or it should get all the benefits admissible under the SCS under whatever nomenclature the Centre fancies to use.

Amaravati: In a significant development, Chief Minister N Chandrababu Naidu has brought up the issue of the special category status (SCS) at the party coordination committee meeting contending that the state should get either the SCS or it should get all the benefits admissible under the SCS under whatever nomenclature the Centre fancies to use.

The Chief Minister, however, did not plump either for no-confidence motion against the NDA government for which YSRC chief YS Jaganmohan Reddy had dared him or calling an all-party meeting to chart out future course of action. This line of Naidu’s thinking cleared the air that he is averse to take YSRC on board even for the special category status, the fight for which is appearing to be transcending the confines of political parties of all hues.

After the party coordination committee meeting chaired by Naidu at his Undavalli residence on the Krishna river right bank on Tuesday, it became clear that one important takeaway was that Naidu did not want to walk into the political trap that the YSRC has laid before him daring him to support a no-confidence motion which it wants to move for the special category status as it would be almost tantamount to allowing the YSRC to have an upper hand over the TDP in this political game of one-upmanship.

Though Naidu appears to have understood that the special category status is fast becoming an emotive issue with the people, he did not play ball with the YSRC. Instead, he appeared regretful that he had settled for the package in 2016, as, he said, he was convinced with the BJP leaders’ argument that it would be as good and even better in some respects than the special category status.

Another takeaway from the meeting was that Naidu is not for an all-party meeting. This, the sources said, is on account of the need to invite the YSRC to the meeting, if the meeting is called. “In the Assembly, there are only three parties. The TDP, the BJP and the YSRC. The YSRC anyway is not attending the session,” he said, implying that he was not game for inviting the YSRC for any meeting.

Naidu, however, found a way to avoid the YSRC by asking his leaders to call a meeting of all stake-holders. He asked Finance Minister Yanamala Ramakrishnudu to prepare a list of “sanghalu” the word which Naidu used implying stake-holders for the meeting. It might include Jana Sena chief Pawan Kalyan, a few members of his joint fact-finding committee, of the likes of Lok Satta founder Jayaprakash Narayan.

Naidu also spoke about TDP’s future course of action vis-à-vis the BJP. The Chief Minister advised his party leaders not to fly off the handle against the saffron party while talking about the denial of fair deal to the state but be very careful in not indulging in wreaking personal vendetta. This has once again laid bare Naidu’s approach to the Centre - be with the BJP as long as possible and be not the first one to snap the alliance with it.

As regards the no-confidence motion, Naidu said it would not be of any use. If anything, one has to first mobilise the support of 54 MPs and then seek discussion on it in the Lok Sabha. Since the BJP has brute majority in Parliament, the no-confidence motion would not serve any purpose. In the past too, he was reported as saying that if he withdrew his two Central ministers from Narendra Modi’s Cabinet, there would be no one left in the government to fight for the state. If you want to get results, you have to stay inside and fight, he was reported to have said.

As for the future course of action, Naidu said the party MPs would continue to agitate in Parliament for the fulfilment of all the promises made to the state in the AP State Reorganisation Act and all the assurances made outside the Act. “Our fight is not to gain an upper hand over anyone. Our fight is to secure the interests of our state and of the people,” Naidu said.

The Chief Minister did not spare the BJP state leaders for their diatribe against the TDP. He wanted to know why they were blaming the TDP instead of going to Delhi and confronting their bosses as to why they were subjecting the state to grave injustice. The BJP has to act as responsibly on behalf of the people, Naidu said.

Naidu utilised the occasion to lash out at the YSRC for trying to incite people on how much they were losing because of the denial of the special category status. “The YSRC is trying to make political capital out of it. It has no real interest in the state,” he said and recalled how the YSRC had hailed the Union Budget, the very moment it was presented in Parliament, though it was anti-Andhra Pradesh.