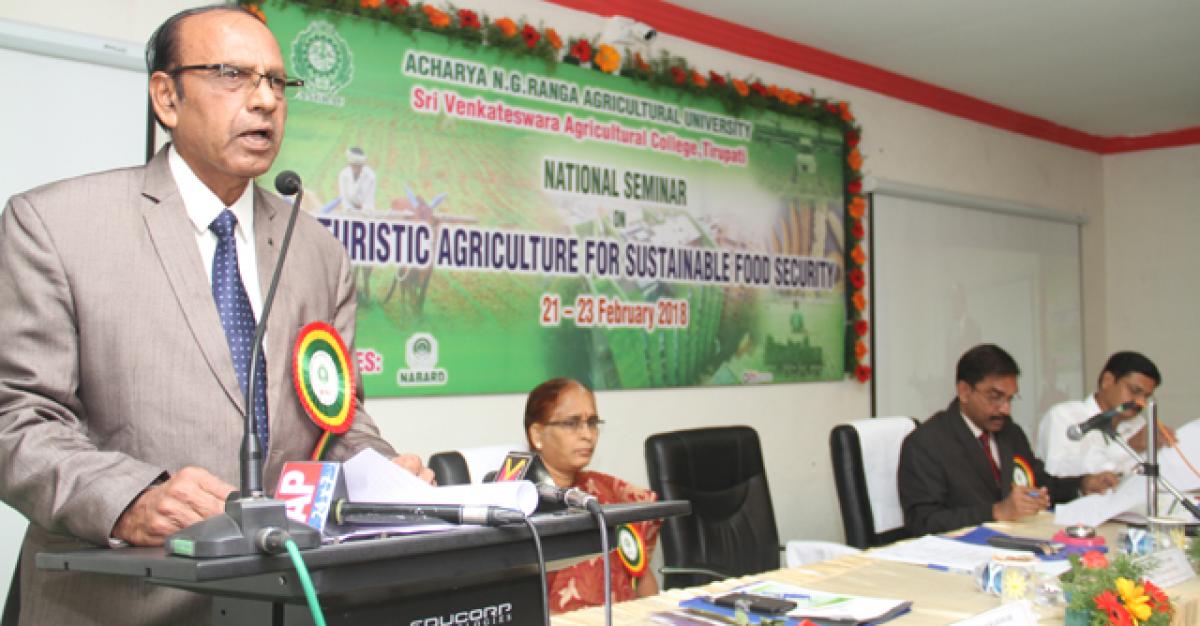 Vice-Chancellor (V-C) of the Acharya N G Ranga Agricultural University (ANGRAU) Dr V Damodar Naidu said that agriculture and allied sectors continue to be pivotal for the sustainable growth and development of the Indian economy.

Tirupati: Vice-Chancellor (V-C) of the Acharya N G Ranga Agricultural University (ANGRAU) Dr V Damodar Naidu said that agriculture and allied sectors continue to be pivotal for the sustainable growth and development of the Indian economy.

The V-C stressed on the need of sustained food security for the growing population. He also highlighted the role of the agricultural scientists in this regard. Inaugurating a three-day national seminar on “Futuristic Agriculture for Sustainable Food Security,” at SV Agricultural College here on Wednesday, Prof Naidu expressed his concern over the risks that the agriculture sector was facing and said that though food production was on the rise, this pace is not sufficient to feed the fast-growing world’s population. The world can overcome food scarcity by enhancing the productivity, he stated.

The V-C mentioned that it was presumed about 370 million people at the global-level would remain undernourished by the year 2050 at the pace of the current agricultural production. Climate changes and increased bio-fuel production were the major threats for achieving long-term food
security.

Naidu said that these issues can be addressed by generating technologies that use low carbon and reducing the greenhouse emissions. There was a need to feed the expanding population with nutritious food in a sustainable manner, he added. Addressing the scientists, the V-C said that the scientists through sustainable food security, should be able to provide not only nutritious food but also promote livelihood for farmers and improve their socio-economic conditions.

He further said that the agricultural researchers have the responsibility of enhancing crop productivity through devising better tools and techniques, improving input use efficiency and achieving production targets. Dean of Agriculture Dr T Ramesh Babu, in his presidential address, outlined the objectives of the seminar and explained in brief about the present agricultural scenario in the country and the need for developing sustainable food security.