AP Govt urged to pay 10 L to kin of victims 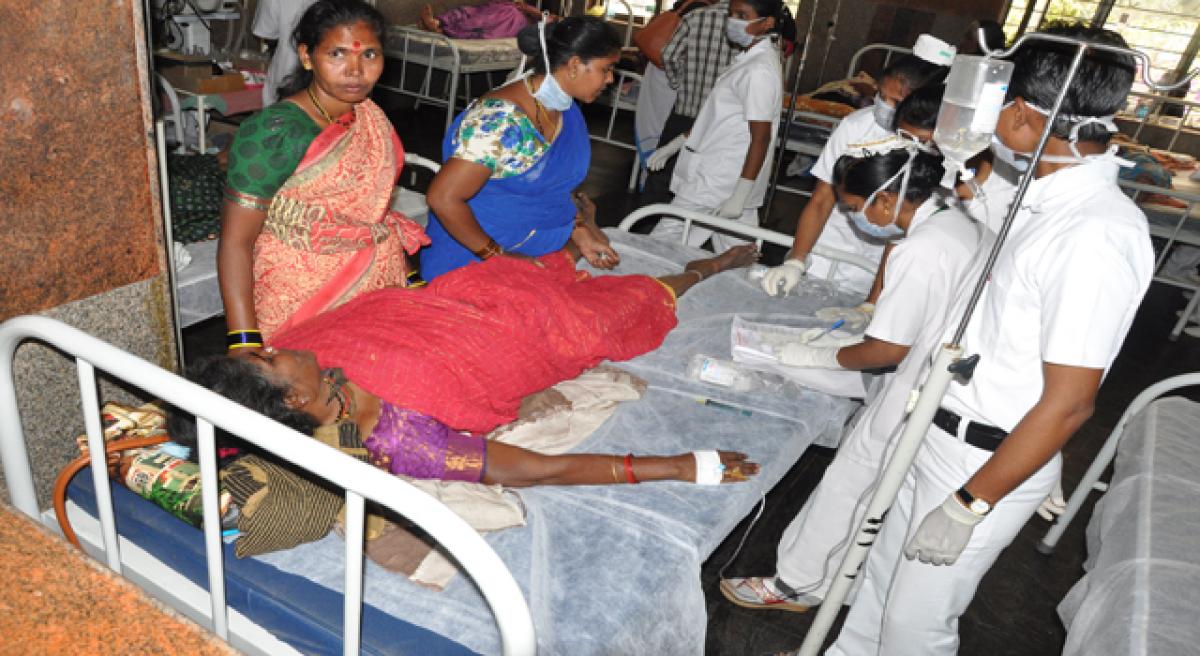 Members of the Legislative Council held the officials of the Guntur Municipal Corporation (GMC) responsible for the death of 10 persons in Guntur due to outbreak of diarrhoea during the last 10 days and demanded immediate payment of ex gratia to kin of the victims.

Amaravati: Members of the Legislative Council held the officials of the Guntur Municipal Corporation (GMC) responsible for the death of 10 persons in Guntur due to outbreak of diarrhoea during the last 10 days and demanded immediate payment of ex gratia to kin of the victims.

The Council held a detailed discussion on Wednesday over the spread of diarrhoea, loss of lives and suffering of civilians mostly belonging to downtrodden families in Guntur. Members of the Council Dokka Manikya Prasad, M A Shareef, Boddu Nageswara Rao, Katti Narasimha Reddy and others participated in the discussion.

MLC and government whip Dokka Manikya Varaprasad said there was no coordination among the officials of the GMC and some of them had been working for a long time. "They don’t care for the problems of the people and the orders of the officials," he averred.

Dokka said 10 people died due to outbreak of diarrhoea and hundreds of families were affected. He demanded that the government should immediately pay ex gratia of Rs 10 lakh to kin of each of the victims.

He suggested that the government can provide financial assistance under the Chandranna Bima scheme or through CM Relief Fund. “I have personally visited some homes and noticed some families have pledged their all belongings to get treatment in private hospitals,' he said and added that the affected families have been spending huge amounts of money for treatment in private hospitals.

He said some officials had been working for a very long time in Guntur and don’t care about the orders issued by their higher-ups. He suggested that the government appoint a Special IAS officer to streamline the administration in Guntur.

Responding to it Minister for Municipal Administration and Urban Development P Narayana said the government would consider the suggestions made by MLC Dokka Manikya Varaprasad.

He informed the House that the government had already announced Rs 5 lakh compensation to each of the families of victims, who died due to diarrhoea.

MLC M A Shareef said the death of 10 people reflected the gross negligence of the officials of the GMC. He informed the council that 178 diarrhoea cases were registered and hundreds of families were affected as they consumed contaminated water. He pointed out that some affected people were taking treatment in the Shadi Khanas due to lack of beds in the Government General Hospital.

MLC Boddu Nageswara Rao said not only Guntur, but the cities like Vijayawada too were facing such water leakage problems. He demanded that the government take concrete measures to address the problem in urban areas. He said water contamination problem recently surfaced in Vijayawada also.

MLC Katti Narsimha Reddy demanded that the government should pay an ex gratia of Rs 10 lakh to each of the families of those who died due to diarrhoea.