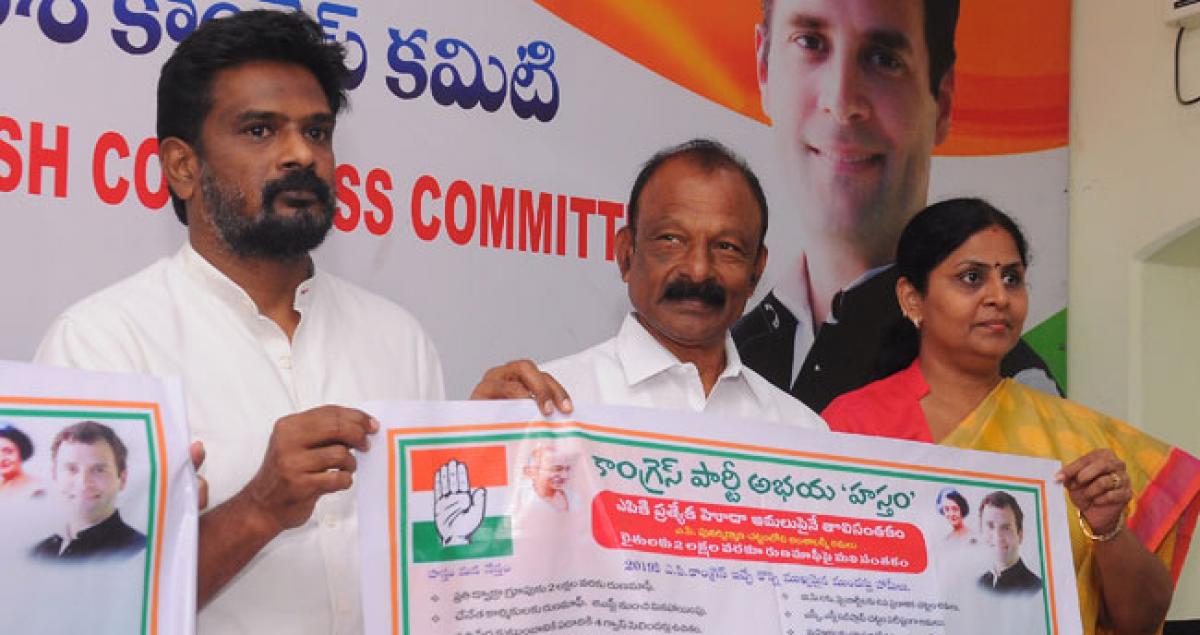 As part of the efforts to reconsolidate its base after disastrous elections in 2014, the Congress party decided to start doortodoor campaign in all the Assembly constituencies in the State from the grass root booth level from October 2, the 150th birth anniversary of Mahatma Gandhi

Vijayawada: As part of the efforts to re-consolidate its base after disastrous elections in 2014, the Congress party decided to start door-to-door campaign in all the Assembly constituencies in the State from the grass root booth level from October 2, the 150th birth anniversary of Mahatma Gandhi.

The Congress party has been vigorously trying to regain the confidence of people as it was rejected by people of AP in 2014 elections for dividing the State against their wish.

PCC chief N Raghuveera Reddy on Monday released pre-election manifesto highlighting that the Congress party would give Special Category Status to Andhra Pradesh if voted to power at the Centre in the 2019 elections. He released pamphlets and wall posters at the Andhra Ratna Bhavan.

Petrochemical complex and Chennai-Vizag industrial corridor would be completed if the Congress is voted to power, said the pre-election manifesto. Speaking to the media on the occasion, Raghuveera Reddy said the BJP government failed to fulfill the assurances made in the bifurcation Act. He alleged that the TDP government during its four-year alliance with the BJP government totally failed to get SCS and get grants and Central government institutions as per the bifurcation Act.

Narrating the failures of the Opposition parties and divisive politics of the BJP government, the pamphlet asked people to vote for the Congress party to get Special Category Status and get all pending projects from the Union government cleared.