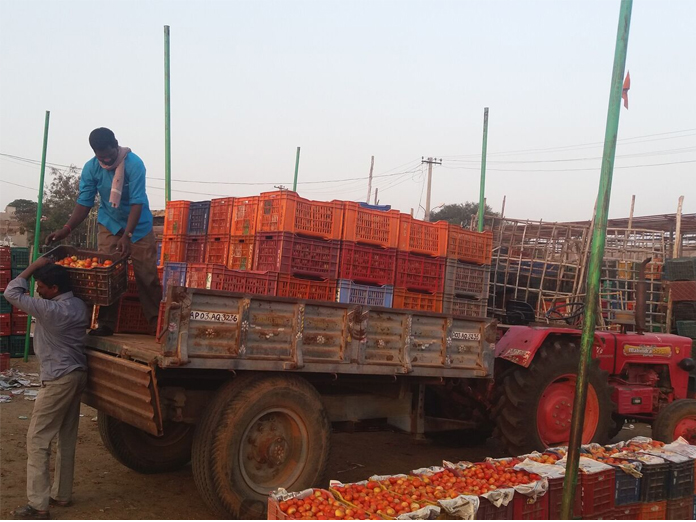 Tirupati: Tomato farmers in Chittoor district has a reason to celebrate Sankranti festival this time as price of tomatoes have suddenly increased due to demand from Tamil Nadu and Karnataka states.

For the last one week, traders from neighbouring states are purchasing tomatoes in large quantity from markets at Madanapalle, Punganur, Palamaner, Valmikipuram, B Kothakota and Mulakalacheruvu.

Till now, 30 lorries of load have been sent to both states from Madanapalle, one of the largest tomato markets in India. Price of tomatoes in open market has increased from Rs 20 to Rs 45 per kg.

In January 2018, price of a kilo tomatoes was only Rs 6. Six months ago, farmers sold tomatoes per kilo for Rs 4.

There is heavy demand for tomatoes as people were purchasing for Sankranti festival. Farmers have raised tomatoes in 502 hectares only as they suffered losses in previous year.

A Shekar, a vegetable vendor in Tirupati, said price of tomatoes has touched Rs 45 per kg and predicted that price may go up to Rs 55 per kilo in the next few days. Speaking to The Hans India, N Jagadish, working as Assistant Secretary at Madanapalle Market Yard, stated that less quantity of stocks are arriving at local markets.

He mentioned commission agents and merchants from Tamil Nadu and Karnataka have been purchasing tomatoes in bulk and selling for higher prices in their state during festival days.

Production of tomatoes in previous year was 400 tonnes and only 200 tonnes are available this time, he added.