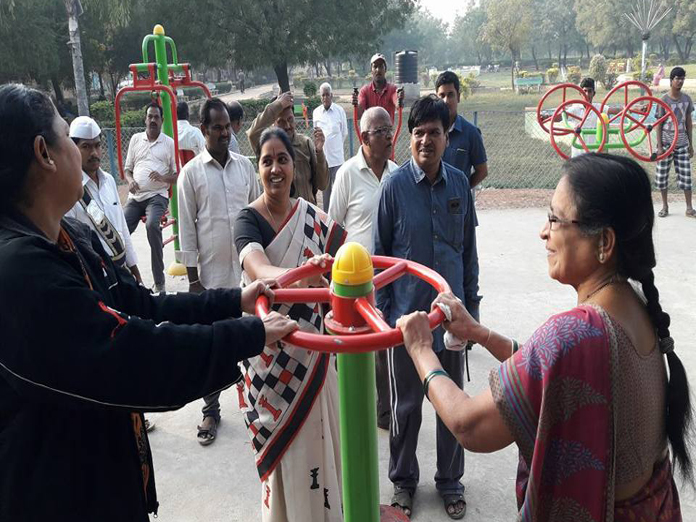 More than 25 municipal parks in the city which were just solitary places to park for a while for the senior citizens had has graduated into entertainment centres for children and fitness centres for the youth and women, thanks to the initiative of Anantapur MLA Prabhakar Choudhury and Anantapur Municipal Commissioner PVVS Murthy

Anantapur: More than 25 municipal parks in the city which were just solitary places to park for a while for the senior citizens had has graduated into entertainment centres for children and fitness centres for the youth and women, thanks to the initiative of Anantapur MLA Prabhakar Choudhury and Anantapur Municipal Commissioner PVVS Murthy.

Until recently nobody really visited the parks except a few senior citizens, who met to spend their time in the evenings. The municipal corporation decided to redefine the parks and upgraded them into flowery nature parks and also as entertainment centres and modern gymnasiums.

The transformation of parks is now attracting hundreds of youth with scores of them making a beeline to the parks for fitness exercises. The beautiful parks had been designed to provide lung space for the citizens to breathe fresh air and to effectively fight atmospheric pollution.

Along with the greenery in the parks, open gymnasiums have been established for the youth to do physical exercises for keeping their bodies fit and fight diseases caused by unhealthy lifestyles.

The municipal corporation has identified 40 parks operating in residential colonies in the city for further development. The idea is to upgrade all the parks into fitness centres by setting up gymnasiums both for men and women and especially for the youth.

Already, there are about 25 parks which have fitness equipment. These parks are drawing the attention of the youth and women, who are flocking to the parks for physical exercises, morning walks, conducting of yoga exercises and for morning meditation and relaxation.

The civic chief with his youthful ideas is trying to upgrade parks into fitness and health centres by setting up gym equipment in all parks in a phased manner. The Rajiv Children Park in the Housing Board Colony is known for its greenery, vast lung space, restaurant for morning walkers and for gym users.

The park teems with life right from 5 am. It is also a meeting point for many, who are busy with the everyday chores and hardly finds time for social gatherings. Murthy told The Hans India that all the 40 parks would be developed as part of city beautification initiatives. He urged for cooperation of all resident welfare associations in further developing the ambiance of parks, roads and lanes of the city.

Nalini an engineering student says that she loves the ambiance and flowery look of the Rajiv Park. Ramani an employee in a private bank complimented the Mayor Swaroopa for the development of parks. The fitness equipment is ideal both for men and women. One need not purchase expensive fitness machines, she added.