Not too long ago, we reported that Tata may have to increase the Tiago’s prices. Tata Motors’ vice president of sales & network, SN Barman, admitted...

Not too long ago, we reported that Tata may have to increase the Tiago’s prices. Tata Motors’ vice president of sales & network, SN Barman, admitted that the introductory price, while competitive, would be difficult to hold on to. Now, Tata has increased prices of the Tiago by around Rs 6,000, depending on the variant.

The Tiago has been well-received by customers and dealers have reported a waiting periodof up to 3 months. While it does cost more now, it’s still a value-for-money proposition. The Tiago got off to a rough start thanks to the problem associated with its original name (Zica), which caused quite a delay in its launch, but the end result is a package that has around 23,000 pending bookings to its name.

Here’s a look at the launch vs new prices and the difference per variant (all prices ex-showroom Mumbai): 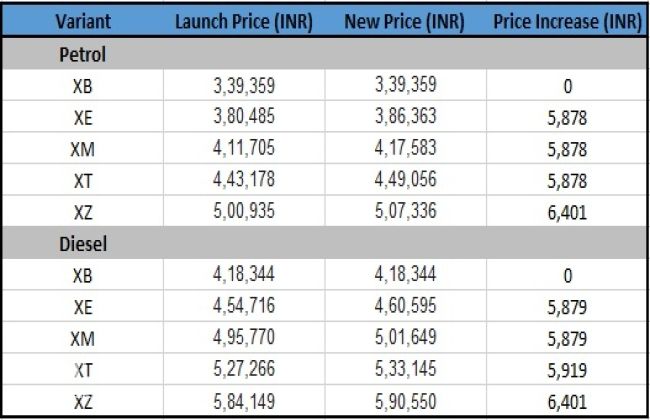 The hatchback is offered with two, 3-cylinder engine options, which come paired with 5-speed manual gearboxes. The 1.2-litre ‘Revotron’ petrol mill makes 85PS of power and 114Nm of torque, while the 1.1-litre ‘Revotorq’ diesel unit produces 70PS of power and 140Nm of torque. Both engines get a drive mode selector as well. The claimed fuel efficiency figures come in at 23.84kmpl and 27.28kmpl for the petrol and diesel engines respectively.

On the feature front, you get the ‘ConnectNext’ infotainment system by Harman with USB/AUX/Bluetooth connectivity, an 8-speaker sound system, a cooled glovebox and a tilt-adjustable steering column. On the safety front, the Tiago is available with dual airbags, ABS with EBD and cornering stability control and rear parking sensors.

Deepika Padukone asked by Kangana Ranaut to Apologise for...

Deepika Padukone Made All The Country Proud Receiving Crystal...
Top
We use cookies for analytics, advertising and to improve our site. You agree to our use of cookies by continuing to use our site. To know more, see our Cookie Policy and Cookie Settings.Ok