Skoda Kodiaq: Why Its Rivals Should Be Afraid The Yetis big brother has finally been unveiled and now begins the countdown to its arrival in India The Kodiaq is part of Skoda Indias product offensive in 2017, and we now have a good idea about what to expect Unsurprisingly, the Kodiaq is a wellpackaged offering and brings a lot of the same qualities that weve seen in the Skoda Superb

The Yeti’s big brother has finally been unveiled and now begins the countdown to its arrival in India. The Kodiaq is part of Skoda India’s product offensive in 2017, and we now have a good idea about what to expect. Unsurprisingly, the Kodiaq is a well-packaged offering and brings a lot of the same qualities that we’ve seen in the Skoda Superb.

This, of course, gives it enough chutzpah to instil a little fear into its rivals. To understand why, let’s take a look at what’s on offer: 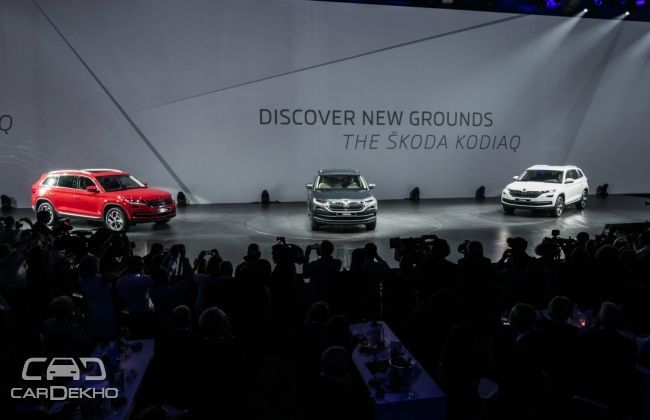 The Kodiaq’s first selling point is its expansive feature list. The SUV comes loaded with gizmos, including the latest infotainment and connectivity systems. Capacitive touchscreens will be seen across the range, while Apple CarPlay, Android Auto, SmartGate and MirrorLink will be available as standard on higher variants (optional for the entry-level ‘Swing’ infotainment system). Like the Superb, it gets a sound system by Canton (most likely a 12-speaker set-up) with plenty of focus on noise insulation as well. 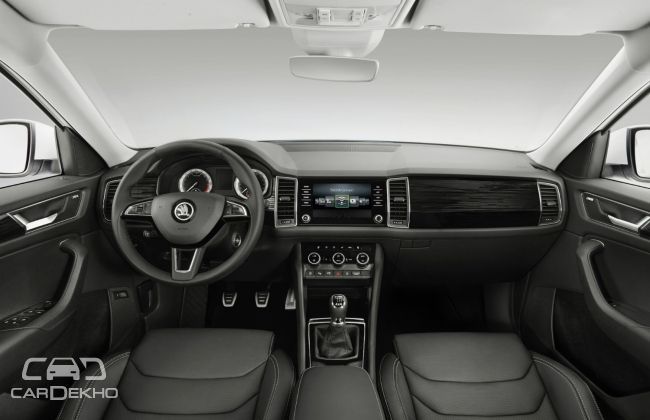 As per the teaser images and videos we’ve seen, features you’ll see on the brochure will include leather upholstery, power-adjustable and ventilated seats, three-zone climate control and steering-mounted audio/telephony/MID controls. Also offered are aluminium-finish floor pedals, ambient lighting and a closable storage area in the centre console. 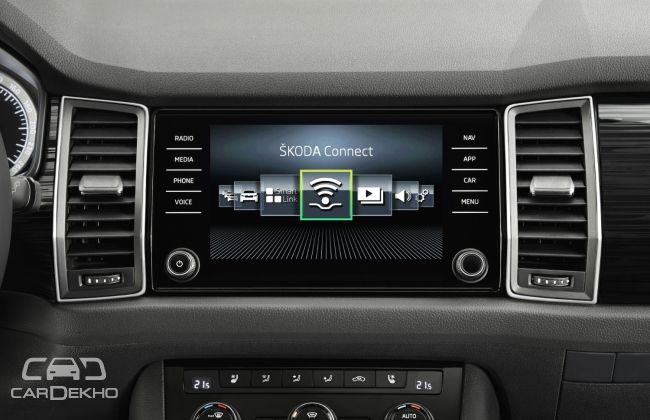 It goes without saying that safety will not be skimped on either, and you can expect no less than eight airbags, ABS with EBD, traction control, attention assist, anti-skid regulation, hill-hold, parallel park assist and TPMS, among other driver-assistance and safety features. The SUV will also get dynamic chassis control, which retunes the transmission response, engine settings, steering weight and suspension damper settings as per the three driving modes available – Comfort, Normal and Sport. 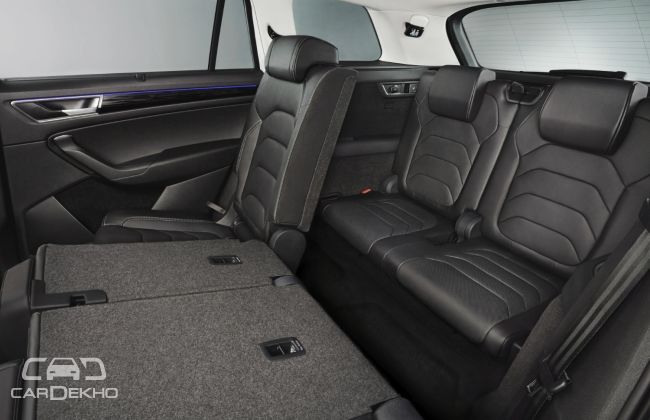 The Kodiaq has been developed with the promise of being a car for the daily family runs as well as a getaway car for the weekend (hopefully not for robberies, though there’s a good 2,065-litres of storage space available for some loot). The second row is split 40:20:40, while the optional third-row seats are split 50:50. Depending on your people-carrying and cargo-storing needs, these seats can be folded down to match your varied accommodation needs. Simply clever? You bet! 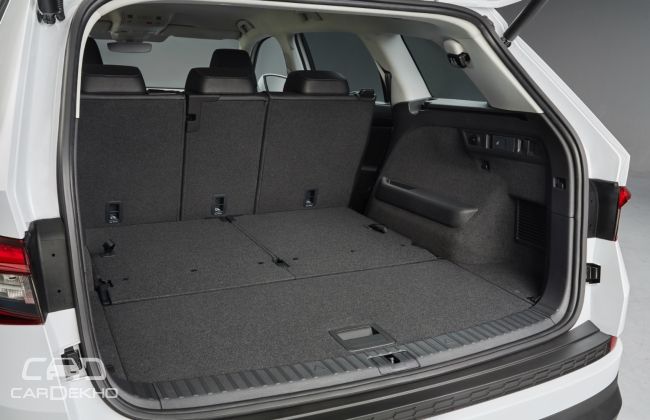 What’s more, the versatility isn’t limited to the cabin. The Kodiaq comes with front-wheel drive as standard, but gets all-wheel drive as an option as well. It’s not a hard-core off-roader but, given the capabilities of the Yeti, we can expect the Kodiaq’s abilities to be enough to satisfy an adventure nut. Depending on the market, it will be available with a range of two diesel (TDI) and three petrol (TSI) engines. The India-spec model will share select powertrain options with the Superb. Manufacturers often have an annoying habit of showing us radical car concepts and severely watering down the production-spec car’s design. Thankfully, that’s not the case with the Kodiaq which features a design that’s not too far off from what we saw with the VisionS concept. Bi-xenon headlamps with crystal design elements in the clusters, sleek LED taillights and DRLs, seamlessly integrated request sensors on the door handles, and radically styled alloy wheels make the Kodiaq quite a tasty piece of eye-candy. Overall, there’s a hint of the Audi Q7 in the silhouette as well, and that’s hardly a bad thing. 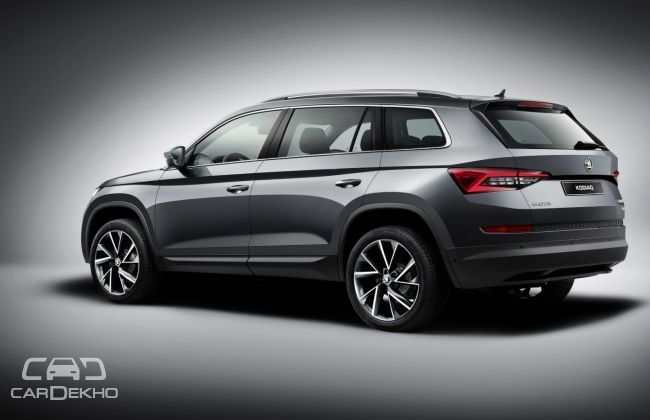 Everything you’ve read above illustrates just how much bang for the buck you can expect with the Kodiaq. Speaking of which, the ‘buck’ in question is expected to be in the ballpark of Rs 25-30 lakh. The biggest Skoda SUV will rival the likes of the smallest German SUVs, i.e. the Audi Q2/Audi Q3, BMW X1 and Mercedes-Benz GLA Class, along with vehicles such as the Ford Endeavour and the soon-to-be-launched new-gen Fortuner.

From what we know so far, the tag ‘best in next class’ befits the Kodiaq. 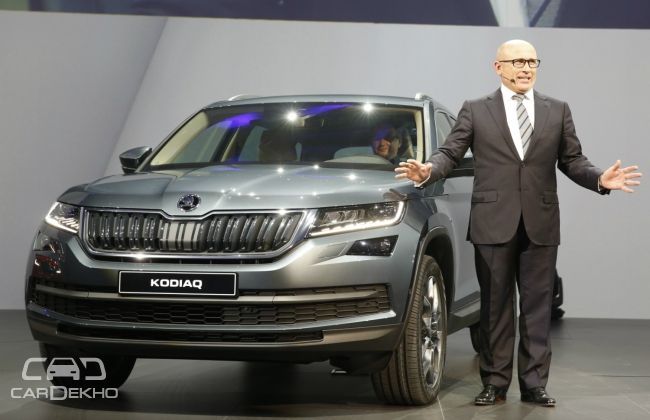 Agree/disagree with the points above? Share your thoughts on the Kodiaq with us through the comments!