From Flipkart, Amazon to Myntra: it's Democrazy sale for Republic Day 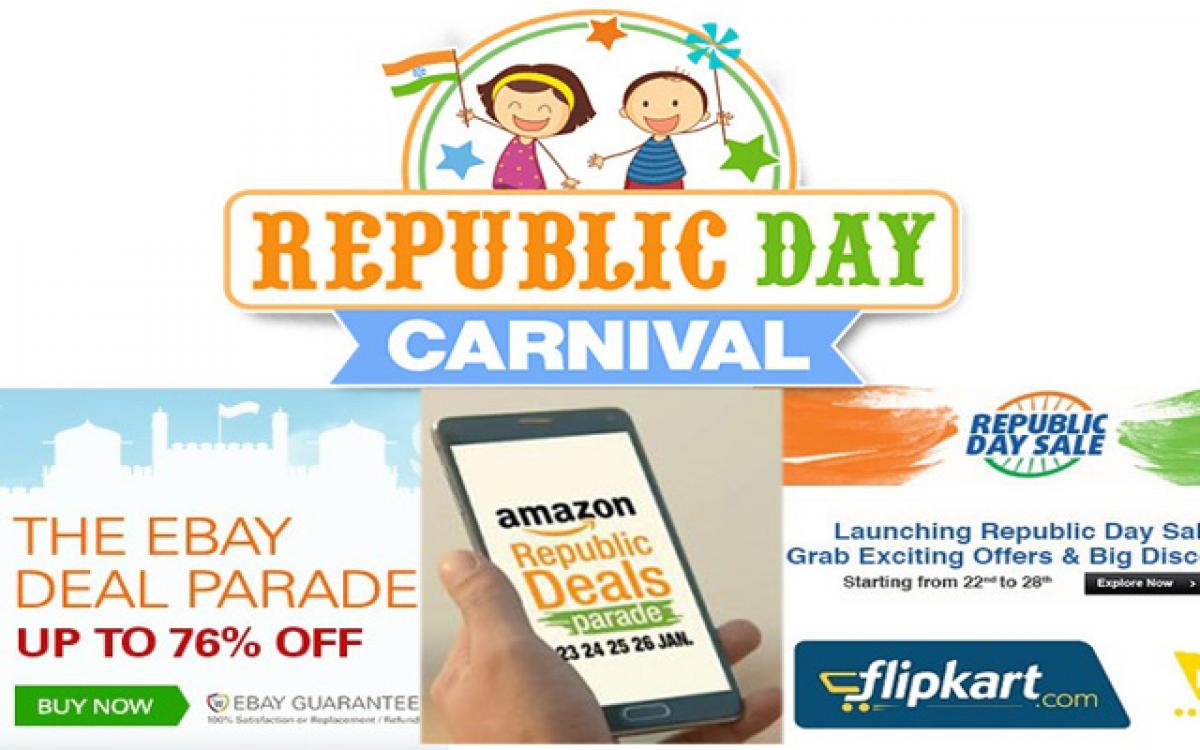 New Delhi: Aiming to make the most out of the Republic Day, e-retailers in India have jumped onto the bandwagon, each offering a big bang sale with some even promising discounts of up to 80-90 percent.

For electronic gadgets, clothing, accessories, kitchenwares, skincare and even the daily grocery, the pitch is particularly forceful. While for some products the sales discount is around 15 percent, for some others it is as high as 80 percent.

Almost all the major e-retailers like Flipkart, Amazon, eBay, Myntra and Snapdeal have come up with their own themes.

Flipkart was among the early birds, naming its three-day pitch "Republic Day Sale", while Ebay's week-long affair is called "Democrazy Sale". Snapdeal's named its sale "Republic of Savings" spanning from January 21 to 26.

For Amazon the "Great Indian Sale" was also spread across three days.

"With this 72-hours marathon deals our customers will have a delightful time shopping in the New Year across a wide selection of products at best possible price-points," Samir Kumar, vice president with Amazon India, said while announcing the sale.

"Consumer demand isn't much these days. But during Republic Day sales, the interest is incredibly high. The response from the public is fantastic so far and the demand graph for electronics is increasing," added Rahul Taneja, SnapDeal's vice president.

"For example, mobile phones ranging within Rs.10,000 have been in great demand like the Lenovo A6000. The sale of Nexus5, i-phone 5S and Micromax is also increasing as January 26 is approaching," Taneja told IANS.

According to both the shoppers and the e-retailers, this time around the sites were operating at satisfactory speeds, despite the heavy traffic due to a large number of people logging in for the sale.

The target segment of these shopping festivals are youngsters and working couples, as they seek to lure them away with much wider variety than an physical store, lower prices, heavy discounts and door-step delivery.

For Indians, online shopping is growing by the day with Goldman Sachs predicting the size of the market -- including travel, payments and retail -- to breach the $100-billion mark by 2020.

According to a survey conducted by Flipkart that concluded last month, the Delhi National Capital Region was the most online shopping-savvy area, followed by Bengaluru, Mumbai, Chennai and Hyderabad.

"E-commerce business grew to $23 billion in 2015 from $13.6 billion in 2014 -- a 70-percent percent growth. The e-tailers contributed $12 billion against $4.5 billion in gross merchandise value," Rajat Wahi of KPMG's India unit had told IANS earlier.

"As one of the fastest growing segments, e-tail has evolved, but it is yet to mature to compete with its offline counterpart (retail). From deep-discounting, e-tailers are focusing on growth and return on investments."

- Ebay named its "Democrazy Sale" over one week

- Snapdeal named its "Republic of Savings" over six days

- Myntra named its "Right to Fashion" over five days