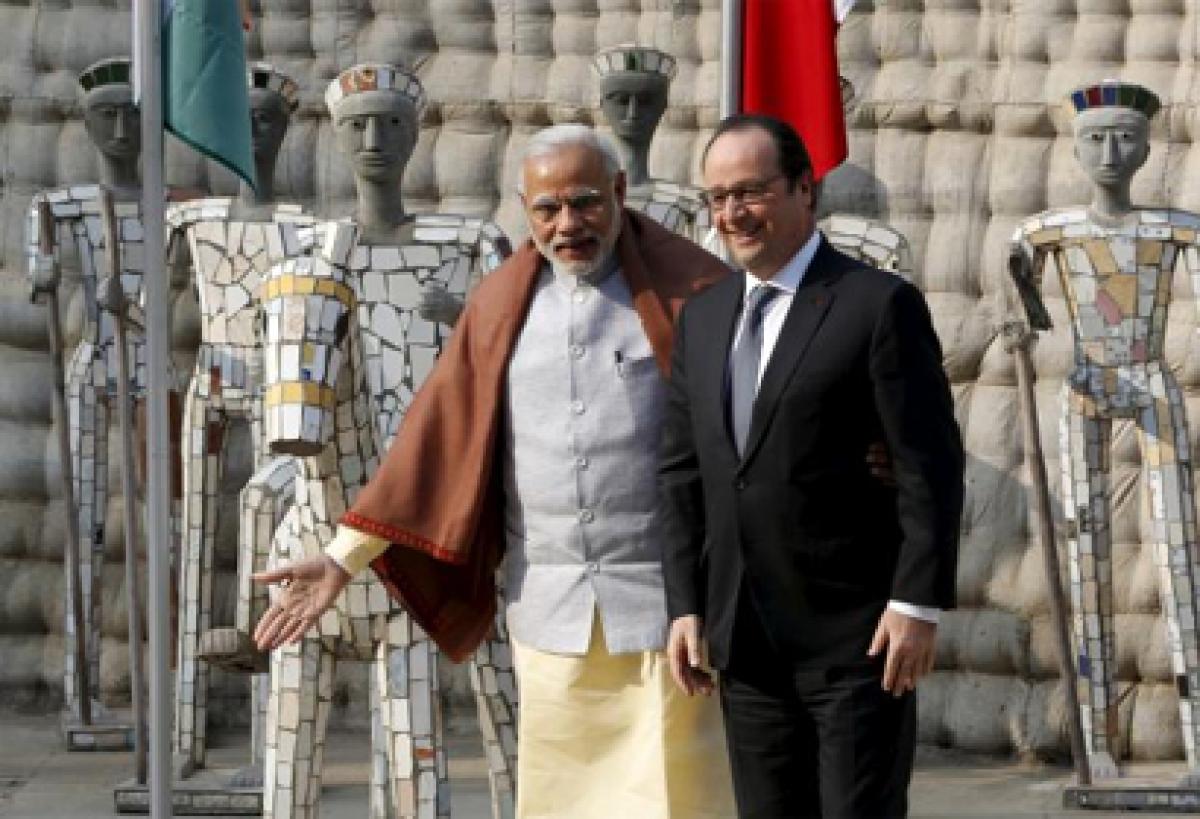 French President Francois Hollande said on Sunday his government was considering an agreement with New Delhi that would clear the way for a long-awaited $9 billion sale of French-built Rafale warplanes to India.

French President Francois Hollande said on Sunday his government was considering an agreement with New Delhi that would clear the way for a long-awaited $9 billion sale of French-built Rafale warplanes to India.

Hollande arrived in India on Sunday. During his visit he will try to close the defence deal and to push forward with nuclear and solar energy agreements, including a plan to build six French nuclear reactors in western India.

India's Prime Minister Narendra Modi has been trying to attract French companies to India and to share high technology in defence and other fields as part of a bid to promote local industry and build a domestic manufacturing base.

In the run-up to Hollande's visit, Indian and French negotiators debated the price of the 36 combat planes designed to replace ageing Indian air force jets, officials of the two nations said.

"The idea we have in mind is the one of an intergovernmental agreement between the two countries in order to allow the firms involved to go all the way," Hollande told journalists.

"It is this intergovernmental agreement that will allow a commercial transaction," said Hollande.

The French leader, speaking in Chandigarh, a city designed by French architect Le Corbusier, said such an agreement was a prerequisite for the Indian side. He did not elaborate.

Hollande will be the guest of honour at India's Republic Day parade on Tuesday, a sign of the deepening political and commercial ties between the two countries.

During his visit, Hollande will try to kickstart negotiations on a plan for French nuclear company Areva to build six reactors in western India.

The talks have recently been stuck over the price of deal, and French utility EDF's recent takeover of Areva's reactor business has also slowed progress.

France and India are expected to lay out a roadmap for nuclear cooperation. India has launched a nuclear insurance pool to address nuclear suppliers' concerns over liability stemming from a 2010 Indian law.

A source at Areva said the firm was waiting to see the details of the insurance cover.

Modi and Hollande also said countries would work together in counter-terrorism and planned to step up cooperation, including between their militaries.

Formal talks will begin on Monday.