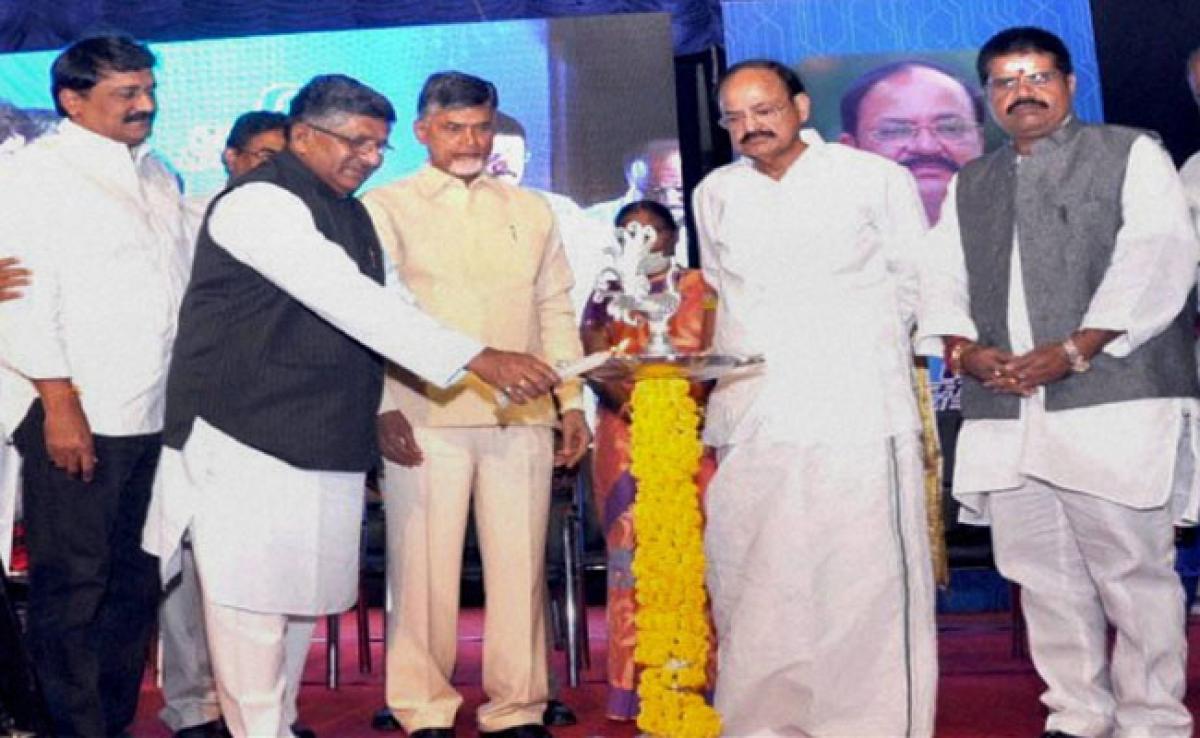 Union Minister for Communication and Information Technology Ravi Shankar Prasad on Thursday said that Andhra Pradesh is all set to become a major electronics hub.

Visakhapatnam: Union Minister for Communication and Information Technology Ravi Shankar Prasad on Thursday said that Andhra Pradesh is all set to become a major electronics hub.

"Andhra Pradesh would become a major electronics manufacturing hub, as four electronics clusters have already been sanctioned for the state, and the fifth one is in process," Prasad said.

Addressing a huge gathering after laying stone for the Society for Applied Microwave Electronics Engineering and Research (SAMEER) centre for Electromagnetic Environmental Effects (E3) here, Prasad said there is huge scope for manufacturing of electronic products in the country including telephones, LED lights, Set top boxes and TVs.
He said that mobile phone manufacturers are setting up production centers in the state at ‘the Sri City’. About 10 crore mobile phones were manufactured in the country in the last two years.

Responding to the request by the Chief Minister N Chandrababu Naidu for setting up of an Information Technology and Investment Region (ITIR) in the state, Prasad said that the Union Government is reviewing the ITIR policy and after formulating the new policy, it would take up the issue.

Announcing various IT related projects, the minister announced that the state will have National Informatics Centre (NIC) besides a new BSNL exchange at State Capital Amaravathi, once the new state capital start operations.

In view of spreading of e-Commerce activity in the country, the Indian Posts geared up degitilizing its operations and to cater to the public needs. The department is expected to set up e-Commerce Centre in Guntur and e-Commerce Parcel Hubs in Vijayawada, Tirupati and Visakhapatnam shortly, he revealed.

SAMEER, a Centre for Electromagnetic Environmental Effects, is an autonomous Research and Development institution and the most advanced institution of Government of India.

The institute will operate through its headquarters in Mumbai with four centers in Chennai, Kolkota, Guwahati and Visakhapatnam.

Union Parliamentary Affairs Minister M Venkaiah Naidu assured that he would bring more projects to help the State so as to compensate the huge injustice done at the time of bifurcation.

He lauded the initiative and commitment of CM Chandrababu Naidu not only for getting projects to AP but also in supporting Central government’s projects. Quoting World Bank, IDBI and International Monetary Fund (IMF) that economic slowdown was prevailing world-wide, he said the entire world is focusing at India.

Earlier, the state’s Chief Minister Chandrababu Naidu appealed to the Union Minister to sanction more IT project to the state as the port city has already entered into the international map by successfully conducting the CII Partnership Summit and International Fleet Review.