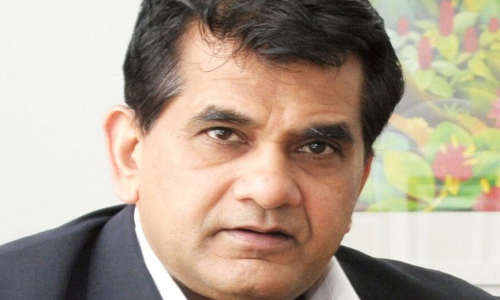 Ecommerce has revolutionised the retail sector in India and will play a major role in the countrys growth story going forward, Niti Aayog CEO Amitabh Kant said on TuesdayHe further noted that driven by the growth in Indias retail market, the countrys GDP will also witness an increase and result in more job opportunities

New Delhi: E-commerce has revolutionised the retail sector in India and will play a major role in the country's growth story going forward, Niti Aayog CEO Amitabh Kant said on Tuesday.He further noted that driven by the growth in India's retail market, the country's GDP will also witness an increase and result in more job opportunities.

"E-commerce market has brought a revolution in India's retail sector and nobody can stop it now," he said at an event here. According to Kant, India is currently growing at over 7 per cent and if the country has to grow at 9 per cent, then e-commerce market will have to play a major role.Kant also said that retail trade of India is bound to expand in coming years and it’s imperative upon traders to adopt technology and digitisation.

According to a report by Deloitte India and Retail Association of India, India's e-commerce market will touch $84 billion in 2021 from $24 billion in 2017 on account of a healthy growth in the organised retail sector. Kant noted that traditional retail market and modern retail market (e-commerce) will co-exist in India even as the consumer behaviour is changing.

"The government should constitute the regulatory authority for e-commerce and cash on delivery service for e-commerce should be banned," Khandelwal said. He also demanded immediate changes in the policy such as inclusion of all players of digital payments not only BHIM & UPI and domestic players should be brought under the ambit of e-commerce policy.