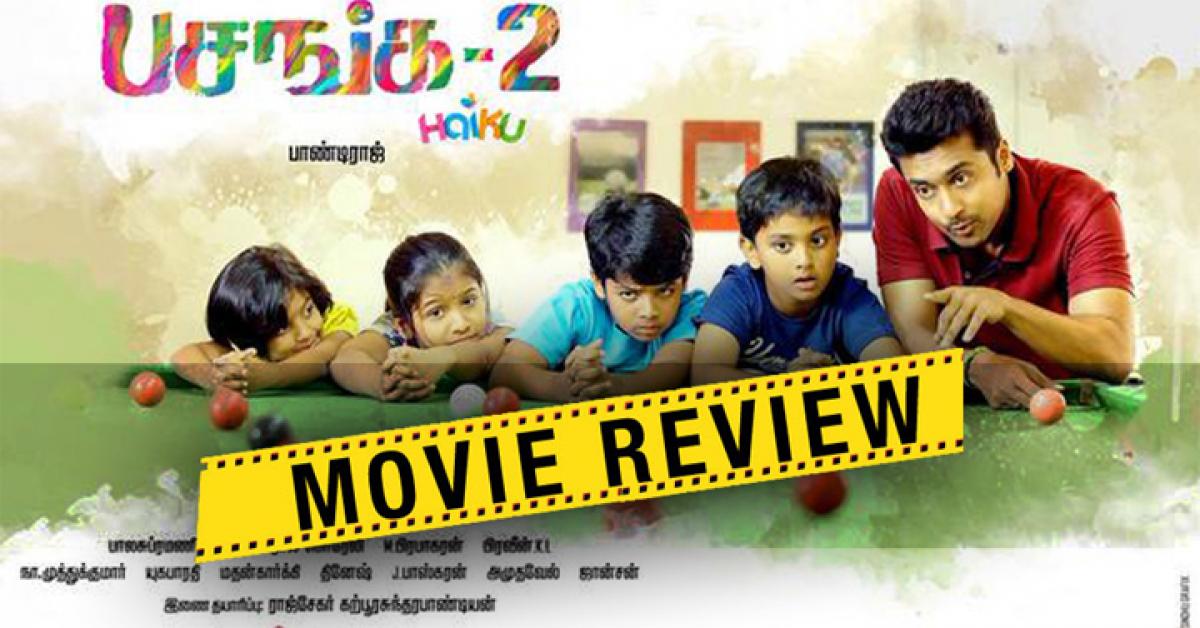 There isn\'t much to rave about in Suriya\'s \"Pasanga 2\", which is fun in parts but otherwise feels like a long-drawn counseling session for audiences on how to treat children with Attention Deficit Hyperactivity Disorder (ADHD), and is strictly targeted at the middle and upper middle class families.

There isn't much to rave about in Suriya's "Pasanga 2", which is fun in parts but otherwise feels like a long-drawn counseling session for audiences on how to treat children with Attention Deficit Hyperactivity Disorder (ADHD), and is strictly targeted at the middle and upper middle class families.

This leaves us with the question whether this disorder is highly prone only in kids raised in an urban environment? As a doctor points out, the kids in the film - Kavin and Nayana - are hyperactive only as they are devoid of any physical activity.

When we're first introduced to the two seven-year-old protagonists, who are extremely mischievous and make their parents' lives nightmarish, we don't quite understand if they're really suffering from ADHD, and if you're a parent watching the film and have no idea about the disorder, you might leave the hall in a state of confusion. From what I gathered, the film isn't actually about kids suffering with the disorder, but about parents who mistake their child's irregular and partly eccentric behavior as ADHD, and that's very common in most cases. While it's good that this angle is being addressed, sadly it doesn't get articulated in the way it's supposed to be.
As much as you want to appreciate director Pandiraj's effort to address an important issue, which he could've have done with little more subtlety, you can't help but wonder why do all these filmmakers always show what we already know but rarely offer a different perspective to look at things. Along the way, "Pasanga 2" becomes a film about social reform and targets the educational system, especially the way schools function.
It makes both cheeky as well as blatant digs at private schools by pointing out how they favour only smart kids, in a bid to boost their reputation, and how life in a hostel is nothing less compared to the one behind bars. Does this mean government schools are any better? There's a lovely dialogue in the film and it goes like this - a father says that he believes in his daughter and not the school she's sent to. Or you could also say a kid who wants to learn will do so irrespective of the school he's put in. As parents, the decision to send their kids to the school of their choice totally rests with them and nobody has the right to correct them. It also depends on their spending capability, because education doesn't come cheap nowadays.
The film goes a tad overboard in making a point about schools and in the process becomes too preachy, and that's where it all goes downhill. Wish it focused more on the lives of the kids and made "Pasanga 2" even more entertaining and children-friendly and less educative. Even the scenes featuring Suriya, who plays an extend cameo, are a delight to watch, but there's still some sense of pretentiousness in his portion.
Show Full Article
Email ArticlePrint Article
More On