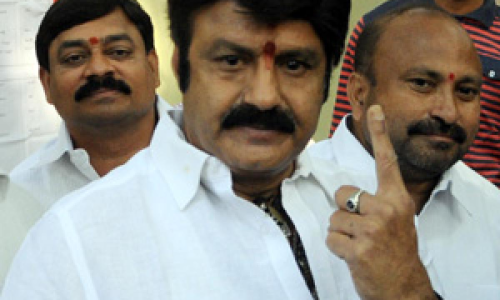 Undeniably, middle-aged stars like Balakrishna and Nagarjuna are giving new generation stars like NTR, Ram Charan and Prabhas a run for their money,...

Hyderabad: Undeniably, middle-aged stars like Balakrishna and Nagarjuna are giving new generation stars like NTR, Ram Charan and Prabhas a run for their money, since Akkineni scion Nagarjuna is all set to cross the 40-crore mark with his latest film ‘Sogade Chinni Nayana' riding on two weeks collections of Rs 35-crore plus across the world and still counting.

Though it was dubbed as the underdog among the Sankranti releases (Nannaku Prematho and Dictator), Nagarjuna proved everybody wrong by delivering one of the biggest hits of his career. "Balakrishna was the first star above fifty years of age to cross the Rs 40-crore mark among his contemporaries like Chiranjeevi, Nagarjuna, and Venkatesh.

Previously with ‘Legend’ and before that he scored another Rs 30-crore hit ‘Simha’, to keep himself afloat despite competition from Gen Y stars," says producer C N Rao, who feels that Balakrishna's 100th film will also create lots of buzz in the industry.

Even though, Chiranjeevi was the undisputed numero uno star in T-town and delivered blockbusters like ‘Tagore’, ‘Indra’ and ‘Shankar Dada MBBS,’ none could touch the Rs 40-crore mark. While Nagarjuna broke the Rs 30-crore barrier with ‘Manam’ and now with Sogade he touches a new landmark.

"In those days, ticket rates were fixed Rs 35 but over the last few years the ticket rates almost doubled with Rs 75 in single theatres and Rs 150-250 per head in multiplexes, so figures are bound to vary and definitely Nag and Balakrishna benefited with new ticket rates," says distributor Srinivas.

Venkatesh scored massive hit ‘Dhrusyam’ and is all set to score more with his next release with director Maruthi to prove they are still in the reckoning at the box office.

Chiranjeevi will be banking on his 150th film to race ahead and set new records but until then Balakrishna and Nagarjuna will be ahead of him at the moment. "Balakrishna and Nagarjuna are picking up performance-oriented roles and scored big hits and even Venky impressed with his performance in ‘Dhrusyam' so they are still in the reckoning at the box office,” says director Siddharth.