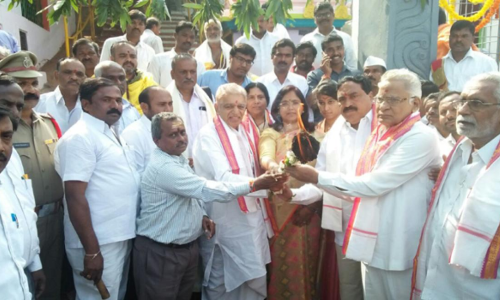 Office-bearers of the Somanatha Kalapeetham have urged the State government to name Telugu University in Hyderabad after the famous Telugu poet Palakuriki Somanatha Maha Kavi.

They wanted the statues of Somanatha Kavi to be installed on Tank Bund in Hyderabad and at all the district headquarters in Telangana as a mark of respect to the poet. The MLA and the collector have promised to take their appeal to the notice of the government.

Marking the World Telugu Conference (WTC)-2017, a ‘Spoorthy Jyothi Yatra’ was launched by the collector Devasena at Palakurthy by lighting a torch. The yatra is being organised jointly by the Kalapeetham, Telangana Writers Association, Sri Someshwara Lakshmi Narasimhaswamy Temple Committee and Jangaon district administration.

After the torch reached Bammera village, tributes were paid to the renowned poet Bammera Pothana at his grave at the village. From there, the yatra moved forward and would reach the WTC venue in Hyderabad by Friday.

The poems written by Pothana should be published in the form of small booklets to facilitate students to read them frequently. Competitions must be conducted every year to render the poems and give prizes to the winners to motivate students to learn them, he suggested, Ramaiah also wanted Bommera village to be developed as a tourist attraction.

He lauded Chief Minister K Chandrashekar Rao’s initiative of organising the WTC for the first time in Telangana and described the conference as a cultural summit.

Events like the WTC would greatly help to educate the current generation about the significance of Telugu language and its culture. Parents should take care in teaching Telugu to their children, suggested the MLA Dayakar Rao.