How GST has killed our economy 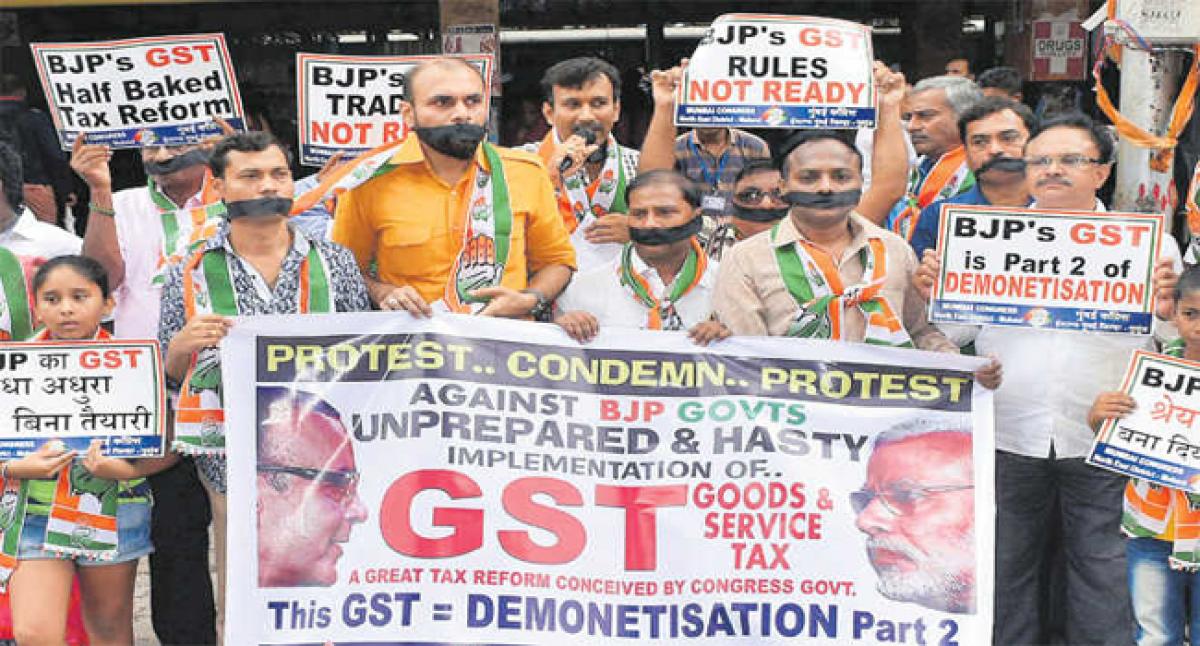 They have inched up marginally to Rs 96k crore in June 2018. The growth rate in revenue collections has slipped from 15 per cent to 2 per cent. This grounding of the economy is not due to the so-called glitches of implementations. Rather these are results of the very structure of GST.

GST has killed small and medium enterprise (SMEs) and handed over their businesses to the big businesses on a platter. That has grounded the economy. SMEs contribute to the economy in two especial ways. They use more labour and less machines. They generate employment. The resulting incomes of the workers and small businesses generates demand in the market.

Secondly, SMEs are the incubation chamber for the development of entrepreneurship. Dhirubhai Ambani started as a small entrepreneur. Then he became big. Perhaps he would not have become a big businessman if he was not provided the protection from big businesses when he was small.

GST has killed the small businesses by increasing their tax burden, increasing the cost of compliance of having to file multiple e-returns, and making interstate trade easier.

Let us consider each point on by one. The Composition Scheme for SMEs under GST has actually led to increase in burden of tax on them. Theoretically SMEs have to pay a nominal GST of one per cent on their sales. But this is misleading.

They pay GST only on the increase in the value of the products. Let us say a businessman purchases inputs of Rs 7 in the production of a packet of biscuits. Let us assume that the SMEs and big businesses both pay Rs 1.26 as GST on these inputs (@ 18 per cent). The biscuits are sold for Rs 10 in the market.

Now, the total burden of GST on the SME is Rs 1.36 (Rs 1.26 on input and 0.10 on the sale @ 1 per cent under the Composition Scheme). The total burden of GST on the big business is Rs 0.54 (Rs 1.80 paid on sale, less Rs 1.26 setoff on the purchase of inputs). Thus, the SMEs pay more GST and are groaning. The second point of increased cost of compliance of GST needs no elaboration.

The third point is that big businesses undertake more interstate trade than SMEs. Previously, some SMEs survived because it was difficult for big businesses to sell their products across the country.

A curtain manufacturer from Haridwar told me that textile mills of Surat were aggressively supplying curtains in his market after the implementation of GST. Thus GST has eliminated the natural protection that was available to SMEs earlier.

The abovementioned multiple pains of SMEs are translating into a slowdown in the economy. The demand generated previously by the workers and owners of SMEs is shrinking. This is leading to overall reduction in the demand and slowing down the economy.

At the same time the big businesses have made more profits. The loss of SMEs has translated into the gains of big businesses. Thus we are seeing a buoyant share market along with slowdown in the economy.

The growth of big business is also chimerical. Bankers have told me that big businesses are scarcely taking new loans. They are not putting up new factories. The Finance Minister himself noted in his last budget speech that Indian businesses were more interested in investing abroad than in India.

The money deposited by Indian nationals in Swiss Banks has increased. These developments indicate that the big businesses are making more profits by increasing the price of their goods due to reduced competition from SMEs. They are not increasing production. Thus we are seeing higher profits with less increase in sales volumes.

The government highlights the 26 per cent increase in the number of GST returns that have been filed. But, as said above, this has come along with a mere 2 per cent increase in the tax collection. This means that economy is cleaner with more businesses filing returns, but it is dying as seen in the decline of GDP growth rate as well as growth rate of tax collections. GST is taking the economy towards a clean death.

The principle of GST is sound and good. Merging of multiple taxes into one has increased he ease of doing business. But the government has smuggled in digitisation in the implementation of GST. This has led to an increase in number of returns filed. But this has also led to the decline of the SMEs and the economy. The positive impact of simplification of the tax regime under GST has been negated by the increase in digitisation.

Irrespective of its negative impacts, we have now to live with the GST. One way to revive the economy would be to allow the SMEs to claim cash refunds on the GST paid under the Composition Scheme. The total tax burden on SMEs will then reduce. The SMEs will get refund of Rs 1.26 on the inputs. They would pay GST of Rs 0.10 on the sale @ 1 per cent under the Composition Scheme.

The net burden of GST on SMEs would be (-) Rs 1.16. They would get cash refund of this amount. In comparison the big businesses would pay GST of Rs 0.54 as explained above. That will help SMEs face the competition from big businesses, generate employment, promote entrepreneurship, and revive the economy.

The government says that benefits of the GST will be reaped in the long run. However, famed economist Keynes said, ‘In the long run we are all dead”. Author was formerly Professor of Economics at IIM Bengaluru