Researchers have discovered an enormous slab of water ice just beneath the surface of Mars, measuring 130 feet thick and covering an area equivalent to that of California and Texas combined. The ice may be the result of snowfall tens of millions of years ago on Mars, scientists said.

Researchers have discovered an enormous slab of water ice just beneath the surface of Mars, measuring 130 feet thick and covering an area equivalent to that of California and Texas combined. The ice may be the result of snowfall tens of millions of years ago on Mars, scientists said.

Combining data gleaned from two powerful instruments aboard NASA's Mars Reconnaissance Orbiter, or MRO, researchers determined why a "crazy-looking crater" on Mars' surface is terraced not bowl shaped, like most craters of this size. 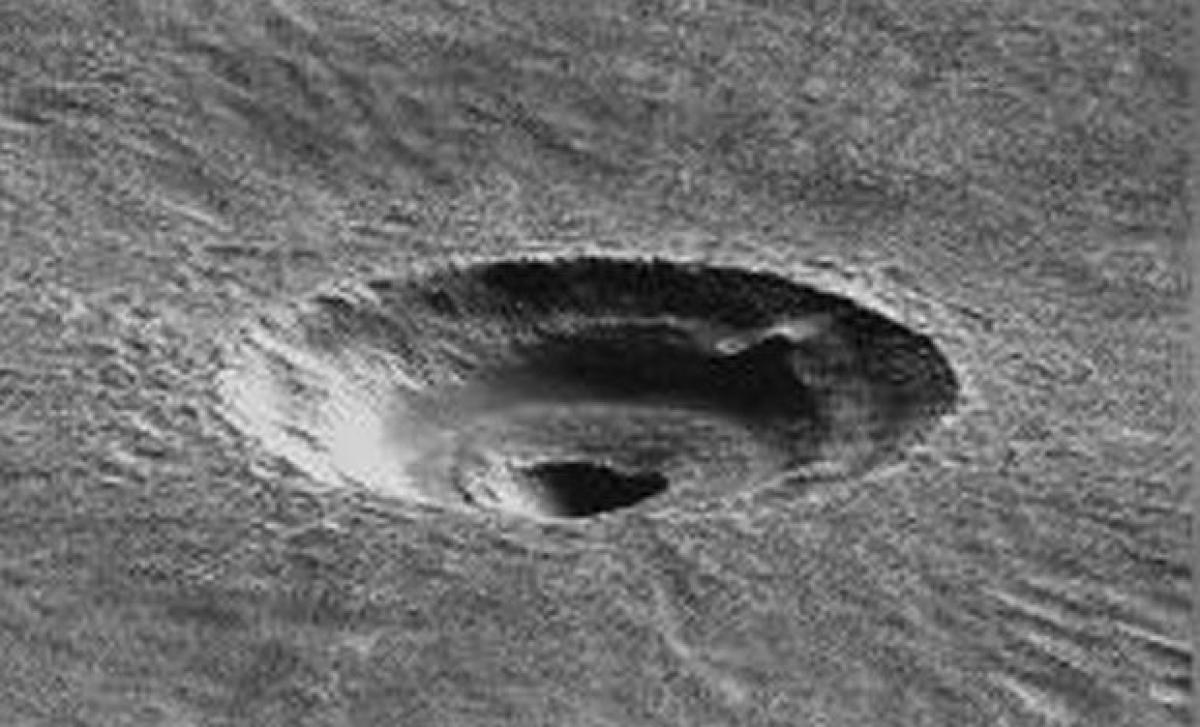 "It's worth mentioning that terraced craters of this size are quite rare," said Shane Byrne, associate professor at the University of Arizona's Lunar and Planetary Laboratory, or LPL. "But in this area of Mars (Arcadia Planitia), there are a lot of terraced craters.
The craters may have formed at different times, but they all have terraces, which indicates something weird is going on in the subsurface," said Byrne. Using MRO's High Resolution Imaging Science Experiment, or HiRISE, camera, the researchers created three-dimensional models of the area's craters, which allowed them to measure the depth of their terraces.
The researchers then used MRO's Shallow Radar, or SHARAD, instrument to beam radar pulses to Mars, allowing them to measure the time it took for the radar signals to penetrate the surface's buried layers and bounce back. Ali Bramson, a graduate student at LPL, combined the two data sets to measure the radar waves' speed, a pivotal clue to the layers' composition.
"In this crater's case, the layers turned out to be ice, and lots of it," researchers said. Just beneath Mars' dirt surface, or regolith, they found an enormous slab of water ice, measuring 130 feet thick and covering an area equivalent to that of California and Texas combined. While the presence of ice came as little surprise to Bramson and Byrne, its age, amount and location did. Although scientists have known for some time about Mars' icy deposits at its poles and have used them to look at its climatic history, knowledge of icy layers at the planet's mid-latitudes, analogous to earthly latitudes falling between the Canadian-US border and Kansas, is something new.
"Knowing where the ice is and how thick it is can tell you about Mars' past climates," Byrne said. "The fact that the ice is so thick and widespread leads us to think it came into place during one of Mars' past climates when it snowed a bunch, ice accumulated, was buried, and then preserved.
"There have been a lot of climate changes between now and the tens of millions of years ago when we suspect the ice was put there, said Byrne. "But it shouldn't be stable today, and other past climates of ice instability in this region mean the ice should've sublimated away into the dry Martian atmosphere by now. So, that's what we need to investigate," he said. The research was published in the journal Geophysical Research Letters.
Show Full Article
Email ArticlePrint Article
More On
Subscribe
Subscribed Failed...
Subscribed Successfully...