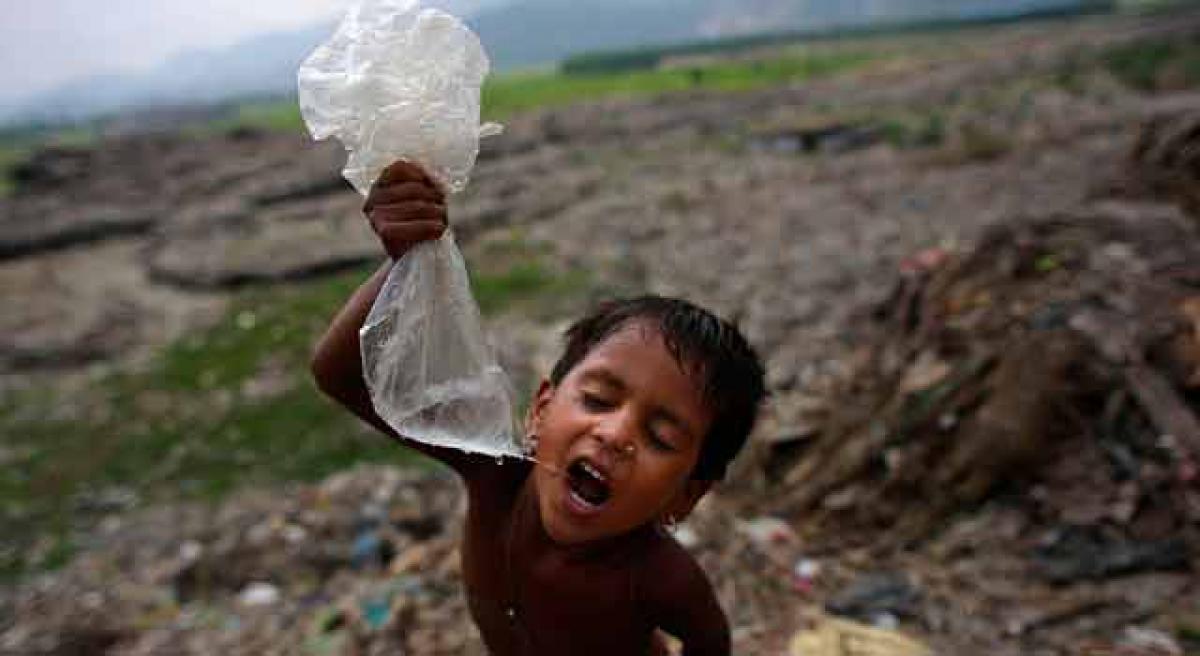 There are two broad issues that assume significance in any strategy on eliminating poverty in India. How should India measure poverty and what should be the strategy for its elimination

There are two broad issues that assume significance in any strategy on eliminating poverty in India. How should India measure poverty and what should be the strategy for its elimination

Measuring Poverty
Conventionally, poverty is measured by defining a threshold level of expenditure (or income) required to purchase goods and services necessary to satisfy basic needs at the minimal socially acceptable level.

Poverty line and the poverty ratio have three potential uses: identification of poor; the allocation of expenditures on anti-poverty programs across regions; and measuring and tracking poverty over time and across regions.

In India, identification of poor is done by the State Governments based on information from Below Poverty Line (BPL) censuses of which the latest is the Socio-Economic Caste Census 2011 (SECC 2011).

Allocation of expenditures on anti-poverty programs can also be done using instruments other than the poverty ratio. For example, the expenditure on the provision of housing across states can be done according to the proportion of households without house in the state.

Universal programs such as those under the Mahatma Gandhi National Rural Employment Guarantee Act (MGNAREGA) and Sarva Shiksha Abhiyan (SSA) are available to all making the question of allocation moot.

This leaves tracking poverty over time and space as the principal objective behind measurement of poverty. The current official measures of poverty are based on the Tendulkar Poverty Line.

But this line has been controversial with many observers criticizing it as being too low. The controversies led the previous government to appoint the Rangarajan Committee, which recommended higher rural and urban poverty lines.

Going forward, we can consider four options for tracking the poor: (i) Continue with the Tendulkar poverty line; (ii) Switch to the Rangarajan or other higher rural and urban poverty lines; (iii) Track progress over time of the bottom 30% of the population; or (iv) Track progress along specific components of poverty such as nutrition, housing, drinking water, sanitation, electricity and connectivity.

While options (iii) and (iv) can complement the measurement of poverty using a poverty line, they cannot substitute for it. Tracking reduction in poverty requires a direct measure of poverty. In turn, this requires us to choose between (i) and (ii).
The main criticism of the Tendulkar line (also applicable to the $1.25 line adopted by the United Nations Sustainable Development Goals) has been that it is too low.

The counterargument, however, is that if our objective is to assess whether we are making progress in bringing households out of extreme poverty, it makes sense to set the poverty line at a level that allows households to get two square meals a day and other basic necessities of life.

It is the households below this bare subsistence level whose welfare should concern us the most and whose progress we must monitor.

If we set the poverty line at too high a level, we would be tracking how many people who had already achieved a certain level of comfort have been made yet further comfortable.

It will tell us little about what is happening to households in abject poverty. The key source of public dissatisfaction with the Tendulkar line was that it would deprive many households in need of government assistance from such assistance by classifying them as above poverty line (APL) households.

But as just noted, poverty line is not the basis of identification of the poor in India. Instead, it is the BPL Census. This fact weakens the case against the Tendulkar line.

At the same time, it must be recognized that judgments on what represents a basic necessity of life would vary from person to person and this is what makes the choice of a poverty line difficult.

Therefore, the final decision on this question needs to be informed by further deliberations that pay adequate attention to the fact that the objective behind an official poverty line is to track progress in combating extreme poverty and not identification of the poor for purposes of distributing government benefits.

But given that historically agriculture has not grown in India at rates exceeding 5 per cent per annum on a sustained basis while industry and services have seen much higher growth rates, in the longer run, the benefits of growth can be share more equally only by creating gainful employment in the latter sectors.

This can be achieved through the creation of a handful of Coastal Economic Zones (CEZs) that can provide the focal point for the location of employment-intensive industries allowing them to exploit the economies of scale and agglomeration.

With a business-friendly ecosystem, these zones can serve as magnets for the export-oriented large-scale firms in employment-intensive activities that are currently exiting China in response to high and rising wages and declining size of labour force there. The presence of these highly efficient large-scale firms will also spawn highly efficient small and medium firms.

Likewise, MGNREGA can be made more effective by allowing it to impart skills. This would also pave the way for many workers to exit the program. Relaxing the proportion of expenditure on materials and allowing the use of contractors in the materials component would greatly improve the quality of assets produced.

During peak season, farmers may be permitted to hire MGNREGA workers by paying 75 per cent of the wages with the balance paid by MGNREGA wage funds. This would lead to more productive use of labour while also spreading MGNREGA wages over more workdays.

Jan Dhan Yojana, Aadhaar, Mobile (JAM) trinity could play a vital role in widening the reach of Government to the vulnerable sections. Jan Dhan bank accounts under Prime Minister’s Jan Dhan Yojana (PMJDY), biometric identity cards under Aadhar and accessibility to the accounts through mobile phones promise to revolutionize the anti-poverty programmes by replacing the current cumbersome and leaky distribution of benefits under various schemes by the Direct Benefit Transfers (DBT).

With the Aadhar account permitting aggregation of the information, this would give the government an excellent database to assess the total volume of benefits accruing to each household. In turn, this information can eventually pave the way for replacing myriad schemes with consolidated cash transfers except in cases in which there are other compelling reasons to continue with in-kind transfers.

Therefore, we must rapidly expand the use of JAM trinity. Each Gram Panchayat may be asked to identify five poorest families in the village and endeavour to lift them out of poverty. Panchayat may ensure that these families get all government benefits.

A modest cash transfer for a pre-specified time period may top these benefits. The eventual effort should be to ensure that the families become capable of earning and sustaining above-poverty level income within five to seven years.