Ways of the wild West 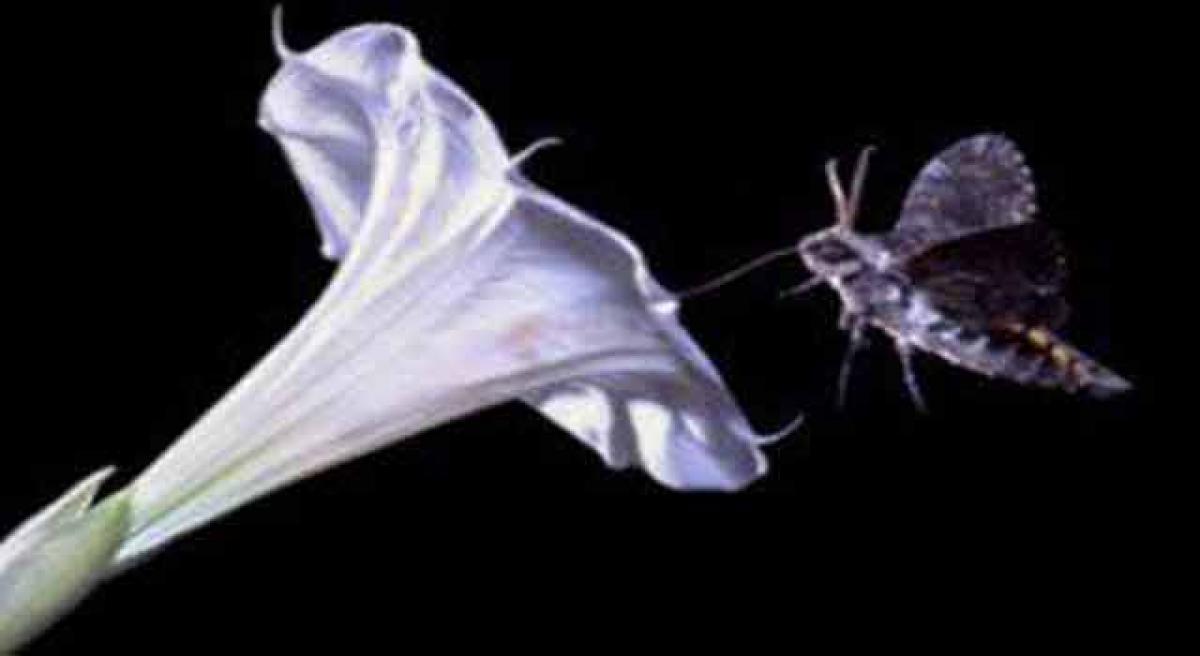 The sun was setting in Oregon, North America, spreading a pinkish glow above the horizon. The twitter of birds as they made their way home to their nests filled the air.

The sun was setting in Oregon, North America, spreading a pinkish glow above the horizon. The twitter of birds as they made their way home to their nests filled the air.

In the dark green fields of wild plants and grasses that were slowly folding up their flower petals and rolling up their leaves for the night, stood a few defiant little herbs- the wild Tobacco plants, called the Coyote Tobacco.

Nicotiana attenuata, or the Coyote Tobacco, is a species of wild tobacco found in the western regions of North America and in northern Mexico. An annual herb which is hardly noticeable, apart from its property of producing nicotine that is stored in its leaves, this plant has a long list of defences to protect itself from its predators.

The presence of nicotine itself renders it poisonous, and the bitter taste prevents herbivores from grazing on these plants. The nicotine in this species is three times higher than in normal tobacco plants. However, two species of insects— Manduca quinquemaculata and Manduca sexta— commonly known as California Sphinx Moths, are not just its main pollinators but also its main predators.

Their larvae, known as Hornworms or Goliath worms, are immune to the high levels of nicotine, and feed voraciously on the leaves of the plant. However, when the plant is attacked, it releases certain volatile compounds from its wounds into the air, called “Green Leaf Volatiles”(GLV) which act as warning signals not just to other plants but also to the predators of this caterpillar, signalling their presence.

Big-eyed bugs (Geocoris sps) descend on the plants and feed on the Hornworm caterpillars and eggs. The parasitic wasp, Cotesia, also lays its eggs on these caterpillars, and the resulting larvae feed on the caterpillars internally, thus killing them.

If the GLVs don’t work well enough, the caterpillars consume the nectar present in the plant hair, and let out further signals that attract their predators. And as a last resort, some of these plants start blooming in the daytime so as not to attract the Sphinx moths at all!

Instead of preparing for a good night’s sleep, they seemed to be preparing for a midnight party. They all had their leaves erect and welcoming; their pretty white buds seemed all decked up and ready to bloom.

Most of them were in a good mood— happy, chattering and laughing away. Just one little herb seemed a little unsure of herself. Her first small bunch of buds was ready to bloom that night, and the cold breeze that rocked her made her feel even more nervous.

“You’ll be alright, kid”, a sudden voice behind her startled her. It was one of the biggest Tobacco plants in the field, loaded with bunches and bunches of white buds waiting to burst into bloom. Little Toe, as she was called, nodded in gratitude. “Thank you, Auntie”, she said.

“Ah, you can thank me later”, said the bigger plant. “We Coyote Tobaccos are tough ones, and we become tough because of all the challenges we face. There’s a lot to come that you’ll have to thank me for!”

Little Toe looked up in alarm. She had thought that not being eaten by the cattle that roamed the fields was enough of an achievement.

The toxic, bitter taste that the Coyote Tobacco plants had, deterred most herbivores from even taking a bite of them! And yet, here was someone warning her of greater perils to come.

“Nothing to worry about”, said the ‘Auntie’ herb. “I’ll be here to guide you! But right now, pay attention to your first bunch of flowers; they’re blooming!”

Little Toe was in for a beautiful sight. As darkness descended on the countryside, all the white buds of the Tobacco plants started blooming, in perfect synchrony.

It was as though nature had taught all of them to bloom together at the same time, like a group of singers singing a melodious chorus. The tiny white flowers now dotted the dark landscape like stars, in the faint light of the rising moon.

“And now, get ready to welcome your first visitors”, said Auntie to Little Toe. “Visitors?” asked Little Toe, puzzled. “But why should I have any visitors? I don’t know anyone.”

Auntie gave her an exasperated look. “Don’t you need any pollen to make seeds? Don’t you want your own pollen to be taken away to other flowers? Can you do it yourself?”

“No, I can’t”, said Little Toe, a little sheepishly. She had forgotten that her purpose of growing up was also to ensure that she could contribute to making seeds that would give rise to more plants of their own kind.

“Then wait for them. But the problem is that these very helpers might turn troublemakers for us”, said Auntie in a worried tone.

But before Little Toe could ask how, the plants could hear a buzzing in the air. It was the sound made by the flapping wings of a host of Sphinx moths, flying towards them.

“Here they come”, muttered Auntie, and every plant, every flower was taken over by one moth or the other. Little Toe had her own little flower cluster attracting two of them, and she stared in awe as they drank nectar and flew around covered in pollen.

But the Sphinx moths didn’t seem to be leaving. Instead of just going away after visiting the flowers, a Sphinx moth landed on one of Little Toe’s green, fleshy leaves, and laid a few eggs!

At first, Little Toe felt all flattered. A mother had chosen her, to be the nurse of her batch of eggs! New Sphinx moths were going to arise in her shelter! She voiced these opinions to Auntie, who gave an exclamation of utter disbelief.

“Are you crazy, kid?” she asked. “Do you want to die even before you grow up properly? Those eggs will give out Hornworm caterpillars, and once they hatch, they’ll feed on every bit of those juicy leaves you possess now!”
Little Toe was shocked. “There’s nothing you can do though”, muttered Auntie darkly. “Wait till they hatch.”

A few days passed, and finally one day, out came innocent looking green caterpillars. But unlike the bigger animals that hated the taste of the Tobacco plants, the caterpillars seemed to love them! A bite here, and a bite there, and poor Little Toe was in tears. But Auntie consoled her.

“Don’t bother”, she said. “They’re inviting their own doom, those little creepers.”

With each bite by the caterpillars, Little Toe’s panic increased. She could feel the changes in her body— not just physically, but also chemically. It looked like the wounds on her leaves had caused her to let out some strange chemicals, and their smell hung in the air.

To Little Toe’s surprise, there came to the field a whole new group of insects- the Big-eyed bugs. “They’re our friends, you know”, whispered Auntie to her. “They can smell the chemical signals we let out of our leaf wounds.

They’ll take care of our problem.” And just like she said, the bugs started feeding on the Hornworm caterpillars and eggs, without causing any harm to the Tobacco plants.

“The Cotesia wasps are coming too!” cried Auntie gleefully. Little Toe now saw wasps coming to their rescue. Instead of eating up the caterpillars, they laid their eggs on the caterpillar’s back!

“Those wasp babies are going to eat the caterpillars inside out”, said Auntie. “Now we will be rid of this nuisance!”
Thankfully for Little Toe, her tormentors were destroyed soon enough. But it wasn’t that easy for Auntie herself, who had many, many leaves, and many, many caterpillars still living on her.

“A nice, smelly gift”, said Auntie. “See these hairs I have? Well, you have them too— they contain nectar— which these caterpillars like very much. It’s so tasty, that they can’t resist it. But there’s just one problem. They start smelling too, and become really juicy and tasty themselves— then they are sure to attract their enemies here!”

And just like she predicted, the caterpillars had the nectar, and started smelling like a very inviting dish… so it was no wonder when a few more bugs and other enemies turned up to finish off the remaining caterpillars. Only a very few caterpillars finally managed to survive and become Sphinx moths!

That year, Little Toe made her first seeds. She was awfully happy, and she had grown bigger, with more flower clusters blooming on her! She was no longer the shy, ignorant little herb she had once been.

“I managed it, Auntie”, she said one day. “All thanks to you! But I still worry about one thing— what do we do when there are just too many of these caterpillars, and we can’t handle them anymore? They are a necessary evil after all, and we can’t do without them, either!”

The bigger plant looked thoughtful. “You know, kid”, she said, slowly. “Things don’t remain the same always. This is what we have done for generations to survive. But sometimes, old ways just don’t work anymore— you need to change.

It will have to be a drastic change, no doubt— but I’ve heard of many Coyote Tobaccos who did it, and survived. Instead of blooming in the night time, they started blooming in the day time.

And the Sphinx moths don’t fly in the day time, see? So they’re safe! They no longer attract the moths with their flower scent. They got other insects to take away their pollen instead.”

Little Toe pondered over this for a moment. “That’s a great idea, Auntie”, she said. “If things get too bad, I’ll start blooming in the day! But tell me, what if, one day, all the Sphinx moths learn to fly in the daytime too?”