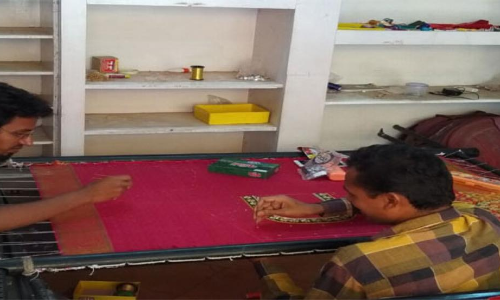 The maggam artists or zari workers are the most-sought-after when women want to wear trendy and fashionable blouses. One may find maggam workshops in every colony and almost in every commercial lane. Maggam workshop includes two to four people squatting and laying zari and flashy designs on a cloth.

ECIL: The maggam artists or zari workers are the most-sought-after when women want to wear trendy and fashionable blouses. One may find maggam workshops in every colony and almost in every commercial lane. Maggam workshop includes two to four people squatting and laying zari and flashy designs on a cloth.

These workers sit for over four to five hours on a stretch depending upon the demand and urgency of work. Sometimes they spend overnight also. A majority of the workers are from north India and mostly from the Muslim community. Whenever there is a need for a worker they call to their native place and immediately a man joins the zari karigari team. This is the reason why locals are not found in this trade. Maggam workers earn a decent money and each can save around Rs 10,000 per month, says Shameem Madari, owner of Rahat Maggam Works, located in Kamala Nagar at ECIL.

The 29-year-old proprietor from Navada district in Bihar, joined the trade about 12 years back and now has about two workers under him. Shameem says the business would always remain in demand because there is no replacement for customised hand woven maggam designs, however, the earnings have diminished because of competition. Every commercial lane boasts of a maggam workshop, he laments. There is a sad part for the maggam artistes, they can work only for about 40 to 45 years of age.

Shameem says that the workers’ eyesight is either lost or becomes weak as they have to sit and concentrate by watching closely while laying designs on cloth. Ranjeet Kumar, maggam designer says, he doesn’t have much education and now he can only work in maggam industry only. There is no support from the government nor any association is formed to fight for the rights of the maggam workers.

They are self-dependent workers who come from other parts of states and earn their livelihood. Shameem and Ranjit are both married and have families. They yearn to go to their native places, but they are stuck in this trade as they can do nothing else. This is the same story of every maggam worker until the government recognizes them and provides them some security and comes out with a pension scheme.