Live: Donald Trump takes charge of the White House as 45th US President 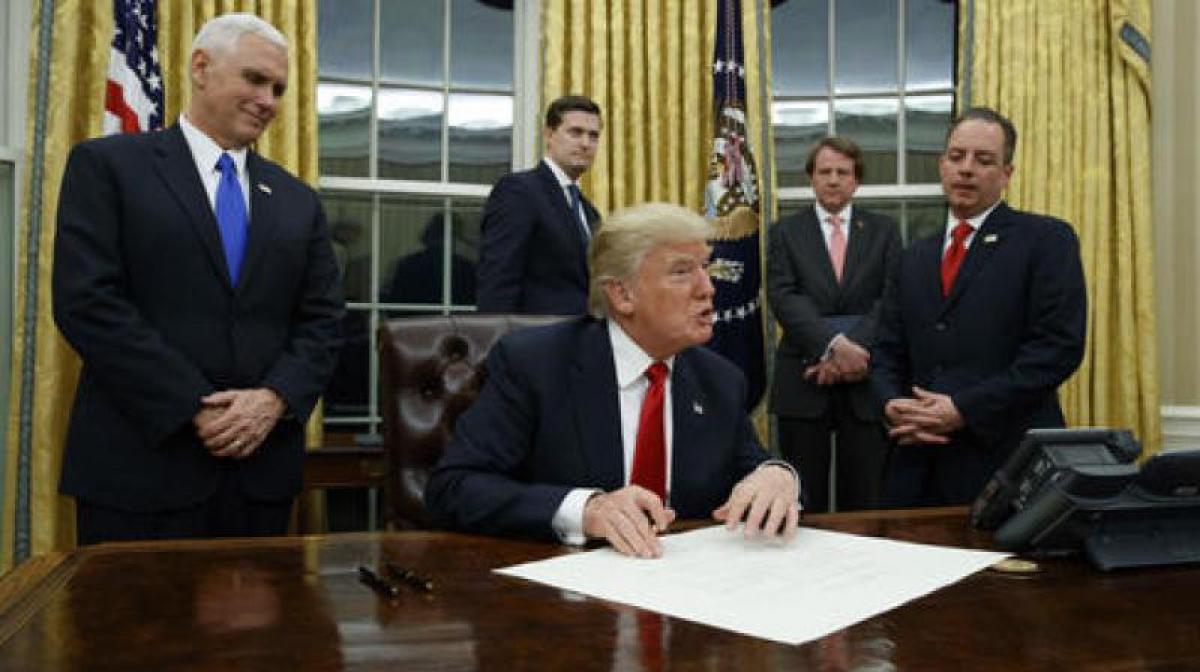 Trump supporters started lining up at security checkpoints before dawn to take their places in the quadrennial rite of democracy.

Donald Trump, the real estate mogul and reality television star who upended American politics and energized voters angry with Washington, sworn in Friday as the 45th president of the United States, putting Republicans in control of the White House for the first time in eight years.

Here are the live updates from the event:

"It all begins today!" Trump tweeted at daybreak. "THE MOVEMENT CONTINUES - THE WORK BEGINS!"

Ebullient Trump supporters flocked to the nation's capital for the inaugural festivities, some wearing red hats emblazoned with his "Make America Great Again" campaign slogan. But in a sign of deep divisions Trump sowed during his combative campaign, dozens of Democratic lawmakers were boycotting the swearing-in ceremony on Capitol Hill.

While Trump came to power bucking convention, he was wrapping himself in the traditional pomp and pageantry that accompanies the peaceful transfer of power. The President-in-waiting will attend church with his family Friday morning, then meet President Barack Obama and first lady Michelle Obama for tea at the White House. The Trumps and the Obamas will travel together in the presidential limousine for the short trip to the Capitol for the noon swearing-in ceremony.

Trump supporters started lining up at security checkpoints before dawn to take their places in the quadrennial rite of democracy.

"I'm here for history," said Kevin Puchalski, a 24-year-old construction worker who drove from Philadelphia to attend the swearing-in. "This is the first president that I voted for that won." His big hope: Trump builds that promised wall on the U.S.-Mexican border. "Keep the illegals out," he said.

Protesters, too, were out early, some wearing orange jumpsuits with black hoods over their faces.

Eleanor Goldfield, who helped organize the Disrupt J20 protest, said demonstrators hope to show they will not be silent throughout Trump's presidency. She called Trump supporters "misguided, misinformed or just plain dangerous."

Trump aides said the president-elect had been personally invested in crafting his inaugural address, a relatively brief 20-minute speech that is expected to center on his vision for what it means to be an American. Spokesman Sean Spicer said the address would be "less of an agenda and more of a philosophical document."

Trump has pledged to upend Obama's major domestic and national security policies, including repealing his signature health care law and building a wall along the U.S.-Mexico border. But he's offered few details of how he plans to accomplish his agenda, often sending contradictory signals.

The three days of inaugural festivities kicked off Thursday. Trump left his Trump-branded jet in New York and flew to Washington in a government plane, saluting an Air Force officer as he descended the steps with his wife, Melania. He and the incoming vice president, Mike Pence, solemnly laid a wreath at Arlington National Cemetery before joining supporters for an evening concert at the Lincoln Memorial.

"We're going to unify our country," Trump said at the close of the two-hour concert featuring country star Toby Keith, soul's Sam Moore and The Piano Guys. But not singer Jennifer Holliday: She backed out after an outcry from Trump critics.

With rain a possibility, the National Park Service announced that it was easing its "no umbrella" policy for Friday, allowing collapsible umbrellas along the parade route and on the National Mall.

The nation's soon-to-be president joked about the chance of a downpour. "That's OK," Trump told campaign donors at an event Thursday night, "because people will realize it's my real hair."

"Might be a mess, but they're going to see that it's my real hair," he said.

Whatever the weather, Trump supporters were looking ahead to the day.

Chris Lehmann, 55, a maintenance supervisor from Belmar, New Jersey, said: "I'm so excited, I'm like, on top of the world."

Eleanor Haven, 83, of Alexander City, Alabama, was attending the festivities with her son, Scott Haven. The pair said they had never been to a political event before attending a Trump "thank you" tour rally in Alabama after the election and were looking forward to Friday's celebration.

"We're excited for changes in the country," Scott Haven said.

All of the living American presidents were scheduled to attend the swearing in ceremony, except for 92-year-old George H.W. Bush, who was hospitalized this week with pneumonia. His wife, Barbara, was also admitted to the hospital after falling ill. Trump tweeted his well-wishes to the Bushes, saying he was "looking forward to a speedy recovery."

While Trump revels in a celebratory lunch with lawmakers and parade down Pennsylvania Avenue - passing his newly opened Washington hotel - workers at the White House will set about the frantic process of moving out the Obamas and preparing the residence for its new occupants. Moving trucks were on standby Friday morning at the White House.

Obama, who will continue to live in Washington, was leaving town with his family after the inauguration for a vacation in Palm Springs, California. He planned to address a farewell gathering of staff at Joint Base Andrews before boarding his plane.