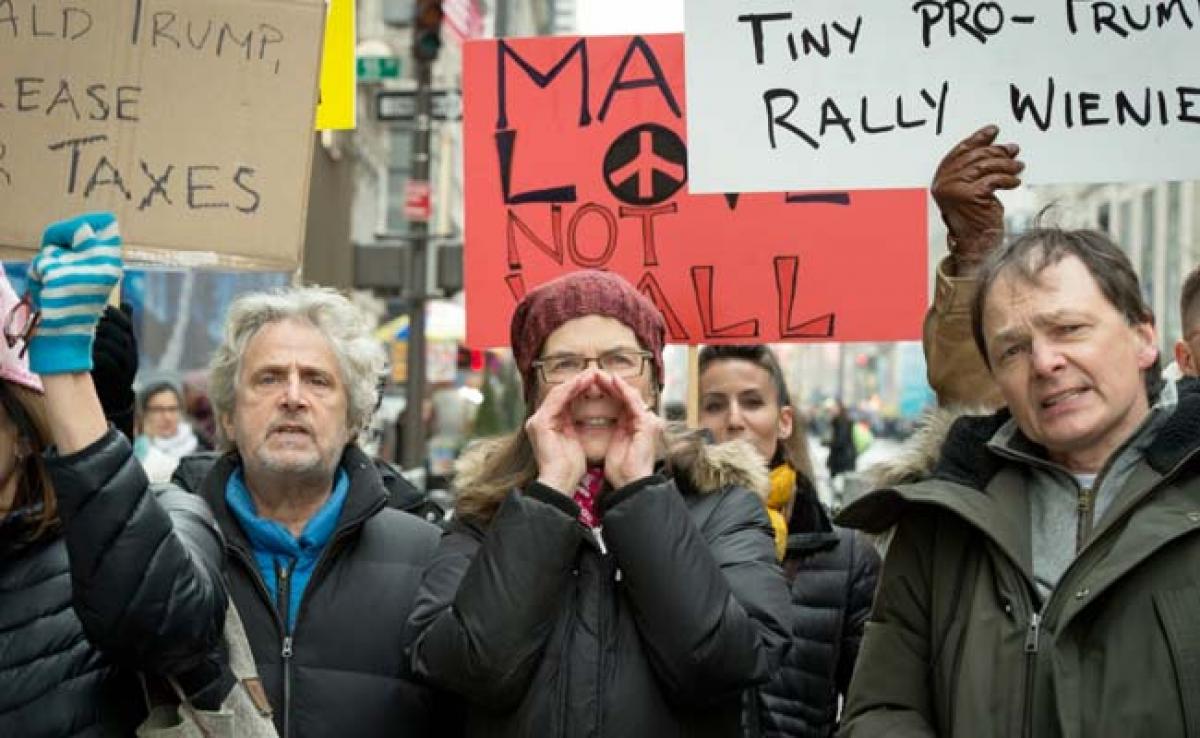 On one side, a few dozen diehard supporters of Donald Trump. On the other, a dozen or so equally passionate counter-demonstrators. They faced off Sunday outside Trump Tower -- proof positive of how entrenched the divide has become.

On one side, a few dozen diehard supporters of Donald Trump. On the other, a dozen or so equally passionate counter-demonstrators. They faced off Sunday outside Trump Tower -- proof positive of how entrenched the divide has become.

The pro-Trump protest, on a bitingly cold Manhattan day, was one of the first in the president's largely Democratic hometown since he took office on January 20.

Demonstrators urged their fellow Americans to give the new president a chance, and they backed his controversial travel ban on people from seven predominantly Muslim countries.

A big white banner they unfurled read, "Welcome the Trump Era!"
The crowd stood outside designer boutiques Dolce & Gabbana and Armani on Fifth Avenue near the president's New York home and business headquarters in Trump Tower.

But such is the antipathy that the Republican president can arouse in New York -- he won only 18 percent of the city's votes -- that soon a dozen or so counter-demonstrators descended on the scene.

Some wore Star of David buttons and carried signs in Hebrew and in English, one of which said: "President Trump Mazel Tov You're Doing It Your Way."

Demonstrators on both sides competed to make their message heard. "No ban, no wall, refugees are welcome here," his opponents shouted in a sing-song chant.

But Cindy Grosz, a Trump supporter and rally co-organizer, said Americans should give the new president a chance.

"He's been in office less than three weeks. He's entitled to have a fair shot and to run the government the way he wants to," she said.

Sunday's rally paled next to the huge anti-Trump marches and rallies that have sprung up almost spontaneously across the country. But the president's New York supporters were uncowed.

Adela Pisarevsky, a Manhattan retiree who emigrated from Argentina decades ago, said the rally had a point to make in a city that overwhelmingly preferred Trump's Democratic Party rival Hillary Clinton.

"For the first time we have a president doing exactly what he wanted to do and instead of waiting to see if it works, they're harassing him. They want him to fail. I'm very much afraid," she said.

Greg Drapkin, 28, from Brooklyn, told AFP that he had been "really excited" to find out about the rare pro-Trump rally in the city, even knowing it might well be outnumbered by Trump critics.

"There's nothing wrong with prioritizing American interests," he said.

"A lot of people are equating that with racism or discrimination but it's not," he added.

A cyclist passed by, waving a sign denouncing Steve Bannon, the senior Trump adviser who some Democrats have portrayed as a dark, Svengali-like force behind Trump.

A Trump supporter, 23-year-old Eric Preneta, approached the cyclist, exhorting him to "give him a chance," and the two engaged in a testy exchange before a policeman stepped in to separate them.

Emily Winters, a cook who had come from neighboring Connecticut to support Trump's strongly pro-Israel stance, said it was impossible to talk to Democrats about the new president.

Pushing a stroller carrying her pet dog, a Pekingese, she said Democrats were hostile, aggressive and belligerent. She likened them to "a cancer."

But Trump supporters, she said firmly, would never give in.